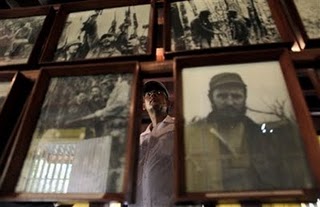 The rancor of the Totalitarian State is lethal. It’s an eternal persecution. An entire devastating structure capable of slowly annihilating you. With persistence they’re where you least imagine them, until you receive your share of venom. A deadly snake who waits for the moment to bite. And there is always a moment.

The attack came from where I least expected. An ex-wife was taken, taking advantage of her spite and three years of separation to use her against me. Without the least shred of proof, I’ve been accused of “rape,” “theft,” “attempted homicide,” “threat,” “siege,” “injuries,” “knocking down a minor in the public street,” among other supposed crimes, the sum of the years exceeded fifty. And other accusations surely will come. It’s like a message from the mafia: collaborate come hell or high water. I have chosen because it is high water. The only thing I’m worried about is not being able to serve all the years if sentenced. At my age and the years they’re asking for, it’s impossible to finish them.

I recently reported on this blog that I was called to the Havana Psychiatric Hospital(Mazorra). I can’t predict what they’re up to. Then I was interviewed by a Lieutenant Colonel of Operations and a Political Major, as they identified themselves, and they related all the accusations made by the Prosecutor without a shred of evidence against me. Of course I know they recorded the conversation. I let them know the fabrication of the crimes and was aware that it was a plan devised by State Security to make me give in, and if I persist, to discredit me internationally.

Obviously they heard nothing new, they already knew everything. I guess they just planned to record me or to see the amount of damage they’d managed to inflict on me. They will be disappointed, because every act of injustice they commit against me and those close to me, strengthens my will be a blogger.

Before I left I told the officials that I didn’t care if they condemned me, or even put me in prison, I was convinced that I had fulfilled the most important mission that I came here to do in this life.

3. Planting a tree, in my honor, a few yards from the Bell of Demajagua.*

4. And, above all, I’ve been a disciplined mason and contributed to my Institution.

After that, all I could do next would be to repeat myself, I kept telling them, and in addition, as they were aware, through third parties who had confessed, State Security had pressured them to continue the harassment against me, I told them finally.

They didn’t express themselves, just listened, and promised to meet with me again to give me an answer to all the paraphernalia they’d created around my person. I know that the objective was to observe my mood, my capacity for persistence and how to continue undermining my strengths.

I do not expect anything good from them. I do not even expect. I decided to forget them, to continue working for human progress because, at some point I understood, that a depressive state often appeared in my psyche. And at moments I thought I could manage it.

There is no better response I could write.