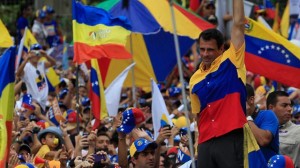 The presidential elections on October 7 may not be the triumphant military parade announced by Hugo Chavez. The Chavez vote has been trending downward. Capriles has gained the advantage. He has come from behind. Now it is a house-to-house campaign for the undecided vote.

This is a concern for more than one person in Cuba. In political roundtables, those discussion programs on Cuban television in which all points of view are aligned, the rhetoric is less optimistic.

Cuban media reported in August that Chávez had a 30% lead over Capriles. Cuban news programs were broadcasting the smiling “Comrade Chávez” in his red beret, shouting that he would trounce his adversary.

The campaign strategy of the strongman of Caracas has left much to be desired. In the background, according to several analysts, is Cuba’s political machinery.

On the subject of democratic elections, Cuba has little to teach its allies in the Americas. The Castros have always governed as they pleased, without a legal opposition and by repressing dissidents.

The use of defamation and scorn in a nation like Venezuela – in spite of past political corruption and criminal violence, the country enjoys a relatively democratic climate – has been a fundamental error by the Chávez team.

Hugo Chávez has not even been willing to have a televised debate with his opponent. Everything has been an insult. This tactic has exposed his intolerance and arrogance.

He should have taken notes of how to run an electoral campaign – by uniting instead of dividing the country – from his Brazilian colleague, Lula da Silva. After fourteen years in power, logic has given way to appalling violence in Venezuela, where 150,000 have been assassinated during this time period.

Deaths in Venezuela are twice the number of murders in Mexico by drug cartels and paramilitary groups. More than a country, it is a slaughterhouse. The poor from Caracas’ hills do not trust Hugo Chávez. Corruption and political cronyism are growing, the prices of staple foods are rising and poverty figures are going through the roof.

The average Venezuelan might have a medical clinic in one corner of his house, but he considers it unacceptable to have to pay an inflated price for it. The poor relation from the Caribbean costs Venezuela billions of dollars annually. Chávez provides 100,000 barrels of oil daily, selling it to the Castro regime at discount prices, in exchange for health care personnel and technical assistance.

In the last trimester, the government in Caracas had to make financial payouts to settle its accounts on the island. In 2000, Chávez and Fidel Castro signed the Accord on Comprehensive Cooperation in which Cuba pledged to send 30,000 doctors and athletic coaches. In exchange PDVSA – the state-owned oil company – was to ship 53,000 barrels of oil a day. According to experts this figure has doubled. Petroleum is essential to the government of Raúl Castro.

Its commitment to a timid series of reforms, including a $900 million investment in infrastructure for the port of Mariel, construction of international tourism facilities and an expansion in the number of self-employed workers, has caused energy consumption to skyrocket.

In a desperate search for energy independence, Castro II has been actively engaged in gas exploration in Cuba’s territorial waters, but so far no petroleum has been found. As a result the October 7 elections are the number one priority for the Castro regime. The fall of Chávez would hit the fragile domestic economy like a tsunami.

Cuba has never been able to get by on its own. When Soviet sponsorship dried up in 1991, the island entered a period of darkness and misery. Power outages lasted sixteen hours a day. Thousands of people suffered from chronic illnesses related to malnutrition. Motorized transport disappeared, replaced by tractors pulled by oxen, horses and donkeys. The comandante único kept in his drawer a plan called Operation Zero in which the army would take charge of distributing food rations in individual neighborhoods.

This phase, which never completely ended, is referred to officially as “the special period.” It has been like a war without bombs. If chaos never erupted, it was because of the rise to power in Venezuela of Hugo Chávez Frías, a true saint on the Castros’ altar. Fourteen years later, Fidel Castro would become delirious, making incendiary rants and suffering from weak health.

His brother Raúl, the hand-picked successor, has not been able to straighten the rickety direction of the Cuban economy. Now more than ever, he needs the financial resources of his twin. Cuba will do all within its power to see that Hugo Chávez remains in office. If not until 2030, as the bolivariano would like, then at least for another six-year term.

In an attempt to keep him in the president’s seat, the regime in Havana offers advice on military matters and sleazy propaganda techniques. If there is one way in which the Creole autocracy differs from its “Venezuelan brother,” it is in his stubborn confidence in the mechanisms of western representative democracy.

At the beginning of the 1990s Fidel Castro whispered some good advice to his Nicaraguan ally, Daniel Ortega: Do not hold elections just to lose. The Castros assume Hugo Chávez has taken note. If not, then they are keeping their fingers crossed, just in case.