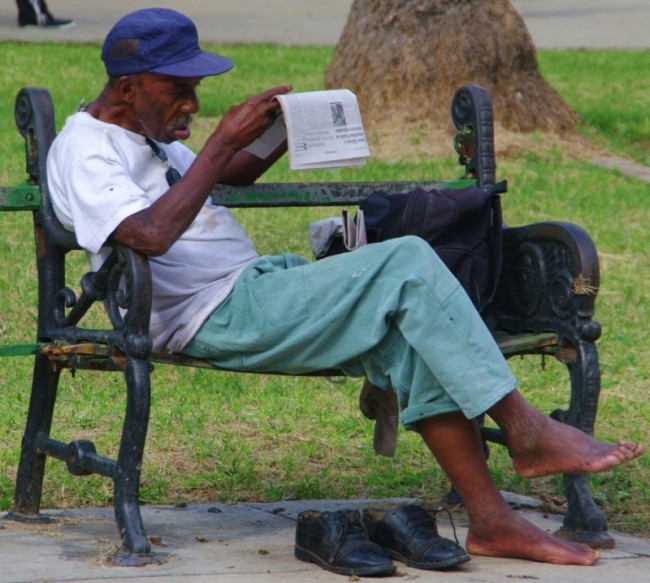 Cubans are readers of newspapers by habit, and after dinner at 8:00 in the evening they sit and watch the television news, not knowing all the details of the current conflict on the Korean peninsula.

The people of Cuba have been well informed that the People’s Democratic Republic of Korea responded with heavy artillery to the island of Yeonpyeong, because of supposed South Korean military aggression in the Yellow Sea.

There is no hint of criticism or questioning of the deplorable action from the Sung dynasty, which, if true, seems a disproportionate response to an island inhabited by civilians and which resulted in four deaths and dozens injured.

When the Asian bullies, addicted to the Juche ideology created by their “dear leader” Kim Il Sung, already had an arsenal of atomic bombs, the Cuban press, would only publish the occasional article, noting that it was all a United States disinformation campaign, because they were looking for a pretext to attack North Korea militarily.

The same thing happens with Iran. Ahmadinejad is almost a saint to the media. The events of March 2009 in Tehran were reported in a biased manner.

The conviction of an Iranian woman to death by stoning has also been overlooked. They remain silent before the latest reports from the IAEA on whether Iran is able to manufacture nuclear devices. Or they present is as a “new manipulation by groups tied to imperialist interests.”

The editorial policy of Cuba is clear. The Yankees are the evil ones. Them and the rich and capitalist nations. They might oppose certain actions of the United States or the European Union. But from there to applauding and remaining silent about the outrages of counties like Iran, North Korea or Venezuela, just because they are enemies of Washington, is a disgrace.

Now, the Spanish government has asked Venezuela to extradite Arturo Cubillas, a member of the Basque separatist group, the ETA, with solid connections with the Bolivarian administration. The strong man of Caracas has denied the request. Cuba has ignored the subject entirely.

The official press responds to the institutions of the State. The daily paper Granma is the organ and voice of the Communist Party, the only party in the country. The other publications that circulate represent the social and mass organizations controlled by the Party and the government.

A journalist who prefers to remain anonymous says that every sensitive and important topic is bared by the Department of Revolutionary Orientation (DOR). Even to the point that, the reporter says, before Granma is printed Fidel or his advisors go through what’s going to be published with a fine-toothed comb.

This iron control by Castro has waned lately. Despite the fat that only 4% of citizens have internet connections, the appearance of new tools like Facebook, Twitter or mobile phones are widening the information dispersal to the man on the street.

Relatives and friends who live abroad often send news, through text messages, that the national media doesn’t publish or distorts. The same thing happens with email. Many people have internet accounts at their work, and take advantage of the slightest slips of the virtual guards to open a link to a social network, read El Nuevo Herald, or the Spanish digital daily, El Mundo.

People who seek out other sources also listen to the BBC, Radio Exterior de España, The Voice of America, or Radio Francia International.

The management of certain international news in Cuba is, at times, biased. Rather than inform, they disinform. Not that the Cuban press always tells lies. But at times they obscure the truth.