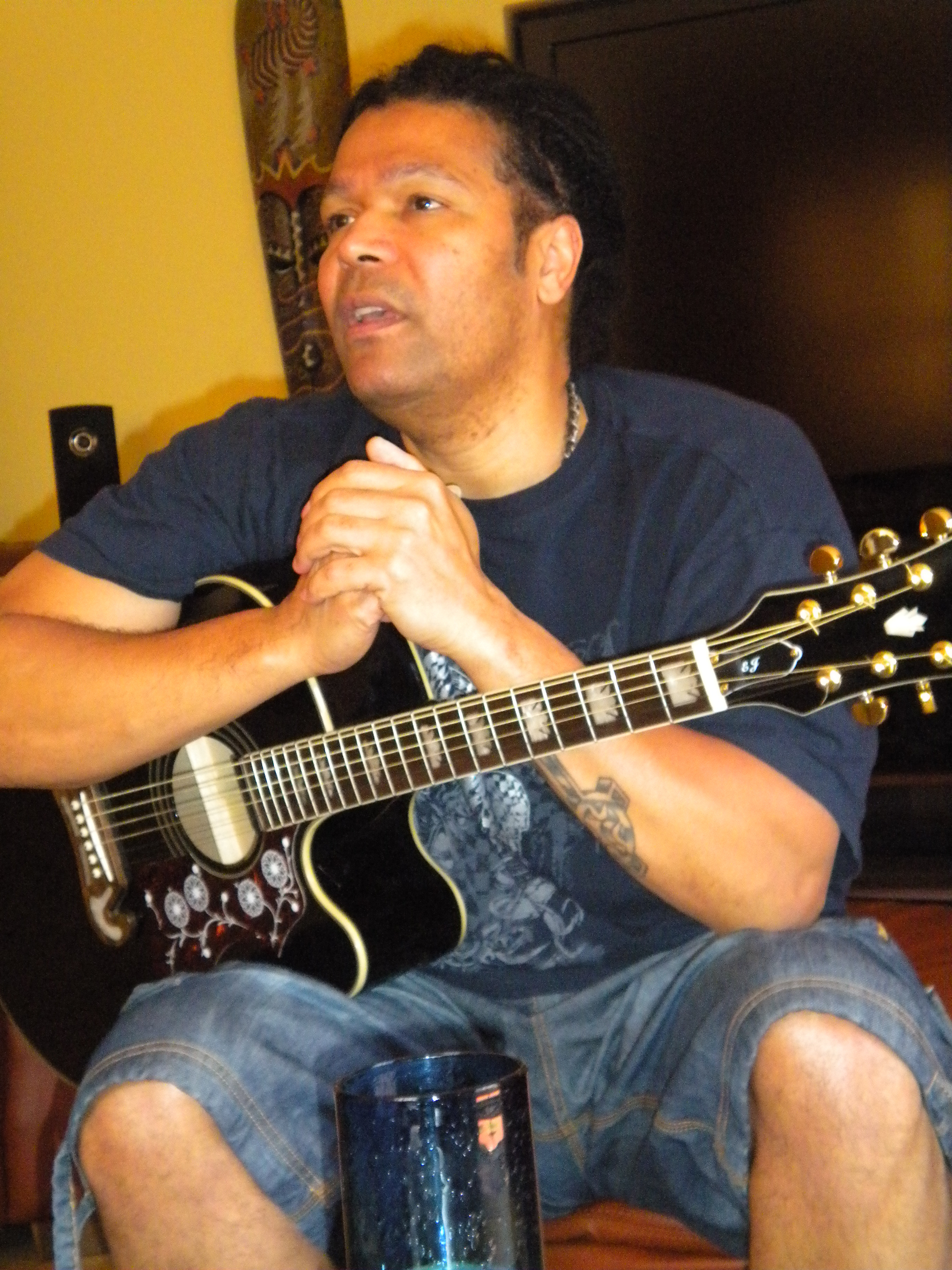 JJ You are a well-known singer, graduate of the National School of Art Instructors in Cuba. Nominated for and winner of several major awards, without a doubt you have achieved something enviable. Tell me about your home, in Santa Clara.

AG I am what you see, I was born in a small village on the outskirts of Santa Clara, which is called Vueltas. There I grew up, studied, was raised. I feel an immense love for my province. There I learned what I am today. My province, the great Villa Clara, has an impressive movement of poetry, music, dance, and although you are from Havana, and therefore a fan of the Industriales, Las Villas is the capital of baseball in Cuba.

AG Let me tell you something, I’m a fan of the Industriales, to me, the best amateur baseball club of the world and the best club in Cuba. Villa Clara has a tremendous sporting movement, always. It is a major city, and being in the center of our island, there is a continuous coming and going of learning.

JJ Perhaps that is why even the son of Santa Clara is different.

I told you that Santa Clara is a city with a strong cultural heritage, with a constantly changing social life. The people in my province have swing, it is the city in Cuba where FM radio is most heard. People are well-informed about what happens here in the United States and the rest of the planet. It is a population with a hunger for knowledge and improvement.

Santa Clara is par excellence the land of resistance against the current regime, since the uprising in the Escambray in the early 60’s, and most of the protagonists were from Villa Clara, farmers in the area, who helped the rebels.

JJ I think that the group Afrocuba marked a before and after in your career; does it mean something in your life that you are also Afro-Cuban?

AG Absolutely. Afrocuba was the band that I wanted to sing with, the best band in Cuba in the 80’s, it was like the Irakere of its time. No doubt this dream was possible thanks to Arturo Sandoval. In a Jazz festival where I had the opportunity to be the opening act for him, and the luck that he listened to what I did. Then the business was completed with the help of a musicologist friend, Elsa, who brought a cassette with my songs and told the band director, Oriente Lopez, about me.

Afrocuba was one of the most beautiful artistic enriching experiences of my life. But to be Afro-Cuban … let’s see, to be Afro-Cuban is a very difficult thing because the country is racist. If you tell a white man about the racism that exists in Cuba, they always deny it. It’s logical. I know well what I’m talking about, I am the son of a white man and a black woman. I’m black. I realized early on that it was harder for blacks to achieve our goals. I became aware of race at the home of Pablo Milanés. I was then 27, had just arrived from another province and 6 years working in the Escambray, I was still a virgin.

It is very hard to be black; to me it is an honor. Cuba is more than that, it is mixed, white, black, mulatto.

AG Yes, virgin of thought, candor, innocence. Music has been one of the fundamental contributions of our island to world culture. I am very proud to be a Cuban musician, of being part of this beautiful phenomenon that is contemporary Cuban popular music. I like my black look. I once had an exchange of ideas with Alvarez Guedes, a guy whom I adore. He asked why not change my image, my braids, my rings. He told me that like this, he saw me as more black. I remember that I answered, “that’s just what I want, to be black, to be myself. I’m not going to dress in costume or stretch out my hair. I don’t want to be like that, I want to be like Bob Marley. I am, like Cuba, a mixture of Africa and Spain, but I am more African.” Africa is within us. If you listen to Cuban music you will find the African presence, the same goes for dancing, painting, cooking, how to talk, body language, cadence of walking… Many talk about the white Spain and seem to want to ignore the years of North African domination. Flamenco music itself has a very strong Arabic influence. But Africa is not only present in our country or in Spain, the popular music we hear today has roots and is basically African. Rock and roll has its African origin, also country music, Caribbean music, tango, candombé… everything.

JJ Is it not a bit ironic that a romantic like you went into exile precisely on February 14, Valentine’s Day?

AG Well, we can consider it as an act of romanticism that was not premeditated.

The reality was that the flight was scheduled for the thirteenth, but because of one of those rare things that only happen in Cuba, we could not travel that day. I was telling you last time that we recorded this same interview – because you should publish it and you lost this interview that you already did — that they were throwing a tremendous amount of witchcraft at us, and so we decided, instead of returning home, to sleep in the José Martí airport in Havana.

JJ Do you consider yourself to be romantic?

AG Yes, I consider myself a romantic in thinking, my way of being, talking about what is romantic in its pure concept. My music is romantic and has to do with who I am, with Matamoros, José Antonio Méndez, with Bola de Nieve, Cesar Portillo de la Luz, Armando Manzanero. My music is romantic, and so are my songs although sometimes there are others that are not so much because they talk about other issues like rafters, the country, etc. I am a romantic, I like utopia, I love it. I am a dreamer.

JJ That’s nice, but sometimes we have dreams that create enemies.

AG Imagine that! The best dreams always have enemies. Ask yourself why, ask Gandhi, Nelson Mandela.

JJ It is pleasant to note that there still exist dreamers, that is comforting.

They say the Cuban government will not allow you to travel to your country. What explanation can prevent you from visiting your family, hugging your friends or giving a concert anywhere in Cuba?

AG That’s a good question. Look, I do not know if the Cuban government would give me the ability to enter my country or my home, or not; I haven’t given them that opportunity, because I have not asked nor will I ask for a visa to go to my country. And, believe me – I’m doing poorly with that because my mother is 84-years-old and it is a fact that it keeps me from sleeping. I miss sitting in a chair and playing for my mom. I’m dying to do that, and to show my records to my mother. Why did Celia Cruz and Olga Guillot die without being able to come and sing in Cuba?

The other day I heard a statement from the Cuban Minister of Culture who said that Cuban culture was in a healthy state because there had been no major figure who had left Cuba since 1959. That is amazing, an unrepeatable joke.

JJ Well, in a certain way Minister Abel Prieto is right. He knows very well that neither Celia, nor Olga, neither you, or any of the so many artists, have left the country, the people love them, listen to them, enjoy them and worship them.

AG You think? I’m a dreamer, a kamikazi, and I don’t consider it decent or just that Cubans have to apply for a visa to enter our country, and ask permission to leave. That is something medieval in the style of the Spanish dictatorship in the time of José Martí. It is inconceivable that in these days there is a government that will do that to their citizens, and citizens who comply without protest. I am not going to accept that, never. It is an outrage.

For me, one of the most beautiful things that could happen to me would be to have the opportunity to travel freely to Cuba, and do a concert in Santa Clara, in Havana, Pinar del Río, Santiago de Cuba, or in whatever other place. That would be awesome, something as beautiful as winning a Grammy. Or more, because sooner or later I’m going to win the Grammy, I’ve been nominated three times, but I don’t know when I will go to Cuba, but it will happen. Any artist in the world can go to sing in Cuba, except us. This reflects the contempt that this government has for its citizens. I plan to travel to Cuba, when you don’t have to ask anyone’s permission.

JJ And what dreams do you have of your first concert in Cuba?

AG I want to arrive unannounced, accompanied by one or two cameramen, sit in any corner of Central Havana, pull out the guitar and start singing. Filming it all, capture the moment in which people keep coming, regardless of the different emotions that could be triggered there. To make a concert at the Karl Marx theater, the Sauto, the National, or in some open space where everyone who wants to can go.

AG I learned a lot more from the things that I’ve lost. I lost the chance to see my mom getting older, to enjoy my nephew, my sister, to see my dad, the opportunity to interact with those friends that I grew up with. I also lost my home, well, not my country, I lost my piece of land because my country is me, my guitar, my songs, the food I eat, my people, my friends, my book of Martí. The country is a state of consciousness, culture, my identity. The fact that I could not live with dignity in my country, the fact that I had to leave Cuba to develop as an artist, and as a human being, is a terrible thing, losses that have hit me hard and made me grow suddenly. It’s all in my work, a constant sadness, longing. We who live outside the island are prisoners as much as those inside. This is evident in the work of Pedro Luis Ferrer, Guillermo Cabrera Infante, Lezama, there is a lot of sadness in all of them.

It is incredible that they put a guy in there who does not like dancing, does not like jokes, does not like Cubans, I imagine that your dad has suffered from that also. Because your father was a musician, and black.

JJ Cuba’s next president has to pass the test. If you can not dance, dedicate yourself to something else. The president of Cuba has to know how to dance.