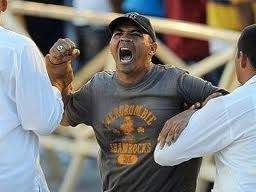 During the mass in Santiago de Cuba, a young man who is desperate, like the rest of Cubans, shouted “Freedom”. Immediately, and quickly, some members of State Security, disguised as members of The Red Cross, threw themselves at him to beat and arrest him. Thanks to technology it was filmed and came to light publicly. Now we are waiting for him to be released, or to be tried for whatever reason occurs to them.

It is the duty of all Cubans that we denounce this and demand his release, to join together to demand he be released without charges. To scream in a supposedly “public place” is not a crime, of course, thinking of the rest of the world, not like it is under a dictatorship. In Cuba everything that goes against the tranquility and ideas of the Castro brothers, is a crime against humanity.

Unfortunately the Pope is still in Cuba and the story remains to be told. His Holiness came to review his troop of cadets of the cloth, who have shown little appreciation for him since he has been placed next to the dictator.

I, Angel Santiesteban-Prats, a common citizen who dreams of being a writer, would not accept being placed next to the Castros, unless by force. That would be the only way they could manage it. With Castro brothers, zero negotiation, that would be the best approach for Cuba.

We must sweep away their kind and all their followers who suck milk from such miserable cow.
The Pope has arrived today in Havana, tomorrow he will have his mass and then he will leave. And we Cubans will continue with the premise of resolving our problems with the dictatorship. As a friend would say “The Pope does not cut it or colorize it,” that is, he can do nothing.

Maybe tomorrow other people will shout the word “Freedom.” Each person has his own way of doing it, and it is his right, although many Cubans ignore it and others prefer to ignore it.

The truth is that there is a Cuban man who shouted “Freedom” and because of that he has been abused. All the power will fall upon his body. But what the dictators can not do is extinguish his shout of independence that is traveling the archipelago like the bird that awakens dreams. And nobody will be able to ignore it.