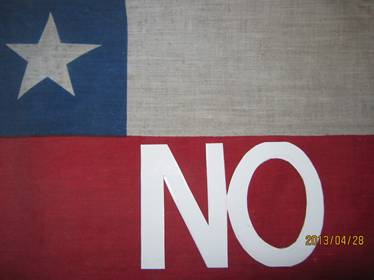 On Thursday night I was watching a program of Latino film that the TV on my planet aired. I never watch it, because of the poor quality of most of the movies and topics chosen, but this one interested me. I was amazed that they showed the Chilean film “NO” on a medium as important as this. This movie was seen on the big screen in one of the recent festivals, but that was barely any exposure. In the movie it shows how a pragmatic dictator, Pinochet, agreed to face a plebiscite on his continuation in power, and even more astonishing, that he acted in conformance with the popular vote.

It was very interesting to be able to see how they undertook the NO advertising campaign despite attacks from the right. What was smart about the campaign  was the making of the advertising “spots” advocating for future and optimistic Chile, without wallowing in the tragic events that followed the military coup, even against opinions of some of the participants of this campaign. They presented the “No” campaign with intelligence and freshness and finally managed to convince the majority.

Another detail that caught my eye was being able to hear throughout the shooting of the film that both proposals, the YES and NO, were granted the same amount of minutes in television space. Something that stands out when we just observed the media manipulation and centralization of Chavismo in Venezuela in the recent election campaign and subsequent voting, not to mention the denial of the opposition’s request for a recount of 100%.

I believe that despite taking into account, and never forgetting that it was Pinochet and the harm he did to his opponents, we have to recognize that in the end, the  dictator obeyed the will expressed in the NO of the Chilean people. I think this is a fact to consider.

Sometimes on television in our country, which is characterized by an ideological monopoly, or “it’s in the details,” or simply someone wishes to escape it.I would greatly like them to continue showing films like this one, which show the two sides of the same coin. In my humble opinion it takes the same courage to say NO as to act on it.