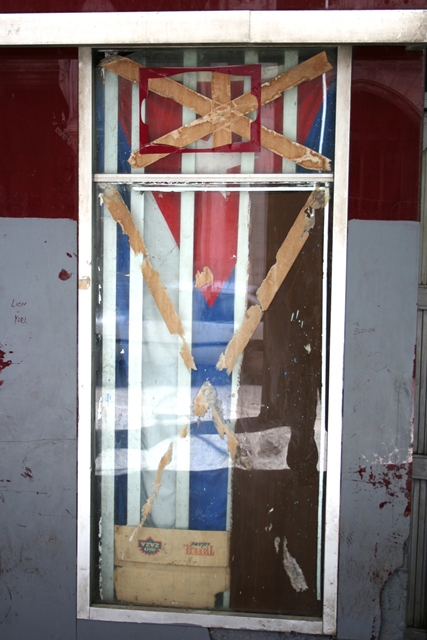 My friend Agustin is worried about me.

Today, when I was just about ready to take a warm shower after working out, I’d put on Linkin Park to raise my energy level: “Somewhere I Belong”, and during that the phone rang. I haven’t wanted to interpret what happened next as anything more than a coincidence. A man with an “eastern” accent identified himself as a Colonel L., I don’t remember any more than having associated it with the last name ’Landa’. To make the joke funnier, it was the name of the Nazi from Tarentino’s “Bastards Without Glory.” He asks me for Raul, and with my intractable sense of humor, I told him in all seriousness that not only did no one with that name live here, but that “we want” — I used the plural as a form of accommodating the phrase  — “to banish everyone who has that name.”

From there on out, the telephone began to ring insistently, and the first time I picked it up they insulted my mother, and that hurt me because it’s an ugly offense. After hanging up, it kept ringing, and I felt obliged to answer calmly: “What cowards you are!” and I listened as the brute threatened to come to my house. From there, I commended myself to God.

But I let the telephone ring because the clock kept running and I had to be at primary school before 12:30. There was a pause during which I gave myself time to finish my bath and then it resumed ringing and I returned to answer.

This time the voice seemed to not come from a brute, but that of a “decent” man who in turn asked for Raul and I asked him: “Who are you guys? Where are you calling from?”. “From Miramar” was all he answered. I recommended that he teach some manners with regards to speaking with a woman to his subordinate. When I hung up, I sat there thinking that if they were military, wrong number or not, those who appeared the most educated and decent were the coldest and most dangerous.

I felt like telling him that they were the bad guys, because it bothers me a lot that the speech about justice and good wishes for “humanity” is nothing more than purification according to the communist paradigm of the ideologized New Man, in the same way the Nazis wanted to achieve the dominion of the pure Aryan, and so treated the Jews like dogs.

I don’t know if the call was a wrong number, although it’s strange that if they were looking for some Raul, they’d wasted some 20 minutes hitting “redial” on a wrong number.

Augustin thinks that they were security agents, I can’t confirm it. But I realized that supposing that the mistake had been made at some “command post,” they’re hung up on the power the State gives them to threaten to come to our houses without impunity.

I’m not pretending to have been attacked telephonically when I know that Daniel Ferrer of the Cuban Patriotic Union in Santiago has disappeared, no one knows where they’ve taken him following his arrest, in these days in which we commemorate the death of Zapata. I go out into the streets very little and I don’t know what might be happening with the Ladies in White, or with whomever dares to remember, during Lent, the crime against Zapata Tamayo.

I resist believing that it might have been something other than a coincidence, but I made myself think about valor. For me, in that moment valor is sterile, I have more important things to do than probe whether or not I’m brave. I write with the hope of stopping people from deceiving themselves with the argument about justice in communism, and permitting their fellow party members from converting the planet not only into an economic ruin, and the famine that comes with it, but also into a giant concentration and extermination camp: that’s the end of the “Left.”

If I can believe that Cuba will be won for human beings and not for beasts, then I’m writing to share with other Cubans the injustices of Cuba as I see them and to find a peaceful solution together. At no time do I forget that I am vulnerable because someone else depends on me, someone who is all to me as I am to her, God knows it and will take care of us.

But I don’t want to return to being closed-mouthed because I’d be leaving to my descendents all the problems of my country that I might not be capable of fixing. This country belongs to our children, who don’t have to suffer the confusion and threats those of us who were born in the ’70s have suffered.

The misfortune of this country also has to do with laziness, with having surrendered, having given up on saving it from the sick mental insanity that overcame us more than five decades ago. And we have to see how the language has impoverished itself — and I insist, castrated itself — how violent — the joy of living, of being the word of life. The variety of life, the difference, the creativity, the richness, consensus, respect and love — in which corner of our history were they when we substituted for them doctors and literacy teachers? Doctors who don’t know of the human totality, who can turn themselves into healers as just easily as torturers according to the dictates, and thugs of the Lubianka school who learned to abuse dissidents by the scientific method.

If I resign from having hope, the problems will only grow, as it’s been shown what happens when we don’t make ourselves responsible. This injustice, surely without bad intent, has been left to me by the sloth of my parents and grandparents, such that now my mother suggests I grow old swallowing mouthfuls of the soul’s blood, humiliating myself for a little bread, renouncing all one can do in freedom.

I want to be with my family, standing at the four corners of the world, and want that nothing stops me from walking, running, or flying. God will take care of exorcising all demons because I trusted in Him. I am knocking insistently — beating — at heaven’s gate, and I know that the Most Holy Trinity won’t leave me without answering.

I believe valor is about this, and that if we haven’t been courageous, it’s because we believe ourselves to be alone. But I learned that in Christ neither death nor life are different, and that which is read as definitive Life, or eternity, is won with faith in the Gospel and with the act of sharing with one’s fellow life with respect, and if possible, with love; so to those who, without bearing us in mind, have abused Cubans for 53 years, life will be very short for them, although they might believe they’ve escaped with theirs, and for that alone.

In this moment Daniel Ferrer could be a prisoner once more. I need a miracle, I believe in the power of love.

I’m going to stop here because if I will not I will begin my litany in the sight of all those who might be reading me, nobody could understand this more than those who are in it. They brutalize and allow the gendarmes to humiliate and abuse others, no uniformity is human, no guideline.

A sick mind cannot be the guide for millions of people. Let us no longer become madmen before the Crazy One because if we don’t go to his side — even refusing to surrender — as the I Ching says: even a skinny pig has the tendency to become furious (fatten himself) and cause disasters.

There has to be a hope, all that we treasure as “culture” has to serve for something now.