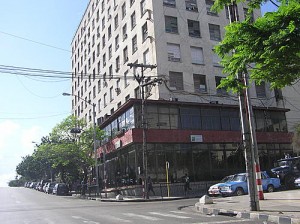 To the calendar of Cuban celebrations we add, these days, the sixtieth anniversary of the beginning of television, recorded on October 24, 1950, which started in the building in the Vedado neighborhood occupied by the Institute of Radio and Television, expropriated from the founders of the medium, who went with their images and sounds to other lands of America, where they found new support for cultural information.

With the expropriation of the television studios, radio stations, magazines and newspapers of the island, the revolutionary government created a monopoly on information to manipulate the means of expression and to gag culture. The design imposed has not changed in five decades. The censorship is evident in the National Television News, aired three times a day, and the mono-thematic Roundtable talk show, which underpins the discourse of power and promotes a collective idiocy.

I will not dwell on those programs that interweave half-truths and outright lies, because their fabrications spread in all areas, including shows about literature, history, sports, and even tele-classes that distort reality according to policy, understood as whatever our nation’s leaders perceive it to be, given that we are still governed by the same group that took over the country in 1959.

Six decades after that sign that surprised a few who expected a miracle in their own homes, television is essential. The small screen is the greatest means of entertainment and information to millions of people. Compared with television, radio broadcasts and productions of cinemas and theaters are just one option. The TV comes into every home and enriches or impoverishes the spirituality of family members.

Television, like the movies, relies on technical, human and financial support. It draws from the press and radio, literature, history, geography, political events and artistic performances, and sports, and calls on science, education and other areas of life that inspire its programming.

But back to sixtieth anniversary of the founding of television in Cuba, one of the first countries to broadcast it in Latin America, along with radio which began on the island in 1921. The radio stations, along with the television studios and channels seem obvious to us, since we almost all grew up with them and they are there, just press a button and sit and watch and listen, change the channel or turn it off.

Broadcasters now evoke the initial moments of our television, interviewing directors, writers, producers, actors and camera operators, in long appearances before the cameras, in addition to dramas, dance and music that marked the early times, and figures such as Enrique Santisteban, Germán Pinelli, Consuelo Vidal, Cepero Brito, Eva Rodríguez, Rosita Fornés or Manolo Ortega. But there are no mentions of the founding entrepreneurs or the stars who went into exile during the dictatorship.

And speaking of dictatorships, we remember that 58 of the 60 years traversed by Cuban television have been lived under tyrannies who “tightened the belt” on television and other media. The first, led by General Fulgencio Batista between March 1952 and December 1958, did not exercise absolute censorship. The second, under the leadership of Castro since 1959, has put the press, radio and television under the complete control of the ideology department of the Communist Party, which justifies what is excluded from the media, fabricates heroes and news, and draws a zone of silence around prisons, law enforcement, government inefficiency, political immobility, corruption and other evils of a system that has hit bottom.

The complicity of our television producers with centralized despotism has no limits. Nothing comes to the small screen without passing through the filter of censorship, one of the keys to converting the people en masse. We will see until when. On television a reporter will announce the changes and breathe life into a freedom where all voices will be heard. Only then will we celebrate with joy that transmission of October 24, 1950.