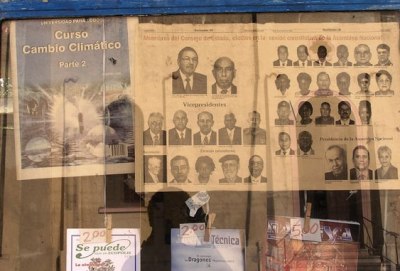 The elimination of civil society within Cuba — solid base of totalitarianism and source of immobility — was accompanied by a foreign policy based on confrontation. The dispute with the United States, the rejection of re-entry into the OAS conditioned on the acceptance of the 2001 Inter-American Democratic Charter, which requires respect for human rights and fundamental freedoms, non-entry into the Cotonou Agreement — binding relations of cooperation — the refusal to ratify human rights conventions signed since 2008 and the conflicting relationships with the European Union, form a strategy to avoid any commitment to restore civil society, respect for human rights and democratization, and closer ties with countries and institutions where these requirements do not exist or are circumvented.

In early 2010, the convergence of a set of internal and external factors made the order of the day the limiting of immobility. Attempts to homogenize the social diversity, to convert the citizenry en masse, to ignore the vital role of rights and freedoms and to determine what, when and how to do everything, to override the human person, leading first to stagnation and decline until ending in a fiasco, which translates, to paraphrase Lenin, in which the underdogs don’t want to and the top dogs can’t, and a recognition in official discourse of the decision to update the model.

Emerging from the permanent crisis has its starting point in the economy: the lack of productivity, the stagnation, the importing of food that could be produced in Cuba, the decline in exports, the inability to return foreign funds deposited in local banks, etc., among other ills. An urgent need because of the fragility of the terms of trade with Venezuela, which are based on a political relationship that could vary sharply if changes occur in the South American country, as happened with the Soviet Union.

The first obstacle to this plan, known as an update of the model, lies in the need for external sources of financing, access to which passes through the release of Cuban political prisoners, which explains one reason for the current process of release from prison. Some colleagues say that the release of prisoners is a government maneuver aimed at changing the external image to access funding sources. Although this idea has its basis in previous events, it loses sight of who we are in transition to a new scenario that precludes such a purpose.

The politics of confrontation arose in the context of the Cold War and was sustained by the aid from the former Soviet Union. The conservation of this policy after the Cold War was made possible by the cooperation of Venezuela, for other than economic reasons, which could disappear at any time. For this and many more reasons, I am inclined to think that the updating of the model consists of the introduction of some reforms that, while lacking the political will for democratization in Cuba, will form a new context. The release of prisoners and economic measures such as a generalization of self-employment, including hiring labor, point in that direction.

The new stage, marked by a turn from the politics of confrontation to understanding, the emergence of new actors, public discontent and the consensus for change, could lead to deeper economic measures and other demands of Cuban society, such as the right to enter and leave the country freely, free Internet access, or freedom of expression, to name three of the most pressing problems for Cubans. Ultimately, politics has less to do with desires than it does with what is possible at each moment. The challenge is the ability to turn that possibility into reality, and that has little to do with complaints or hasty judgments.

The weakness of the internal forces due to the absence of an independent civil society and legally recognized, have to rely to some extent on the international community, which together with the release of prisoners, the Cuban government should require ratification by human rights treaties signed since 2008 and bring domestic laws in line with these documents. That and the inability to update the model without accompany the implementation of human rights, the basis of dignity and self-interest, the purpose of leaving the economic crisis is void.

If updating the model means preserving totalitarianism, the attempt contain an insoluble contradiction, for without the participation of interested citizens as active participants in the destiny of the nation, emerging from the crisis will be impossible. The State and civil society are two elements of the same system and the field of politics goes beyond the State, therefore imposing in the short or medium term a replacement of the totalitarian model for another more democratic and participatory. In short, for socialism, in all its variants, there is only one thing it cannot do and that is deny the idea of democracy, and so this implies structural changes that can not be subject to ideology. That is the challenge of the powers-that-be, and the strength of the forces of change.

The political history of Cuba is a demonstration that changes in the absence of civic participation of citizens always lead back to the starting point. This explains how, in terms of civil liberties, we have regressed to the state Cuba was in in 1878. People’s willingness to follow this or that leader, has resulted in a politics monopolized by elite figures or characterized by the rule of personality, messianic leaders, the use of physical and verbal violence, and the control over the private domain by the public power. That story tells us how inescapably vital are the changes in the economy and human rights.

Right now, the public reappearance of former head of the Cuban state has, as a common denominator with the past, the absence of the citizen as subject of history. That is our Achilles heel. It is not about imminent or nuclear war, but about that fact that we Cubans, regardless of that war, are threatened by serious problems in our backyard and we most solve them. Perhaps our greatest contribution to conflicts in other parts of the world would be to solve our own problems to demonstrate our ability and responsibility. And this has more to do with converting Cubans into active participants, than with trying to persuade President Obama.