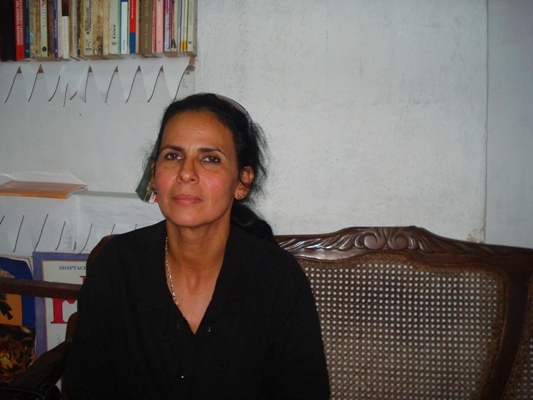 Martha Díaz Rondón tells me, “There were more than thirty of us. We took flowers to honor Orlando Zapata Tamayo and the word to pray for him and to say ‘Zapata Lives’ as we were leaving the cemetery as we have done in spite of acts of repudiation and other provocations on other Sundays, when there has been no accredited press.

“When we left the church the atmosphere was very tense but we followed the usual program and entered the cemetery. Leaving was the worst.

“We all were severely beaten, the men acted as a shield but it wasn’t enough. The men tried to protect us and put us in the middle. They made a human chain but the combined forces, trained to beat people, broke the chain and disabled us by force. They forced us onto buses with blows, including Reina Luisa who is an older woman with health problems. All of us were taken to the police station in Banes.

“There, the women suffered the worst humiliations. I was stripped naked, forced me to take off my panties and do squats in front of the guards. We saw the guards because they had the doors open. Gertrudis Ojeda Suarez, Dulce María, Prado Portal Barbara, and another girl whose name I can’t remember, and Romero Maritza Cardoso, all went through the same humiliation.

“Those who forced us to do it were women they brought from the prison. We asked them to close the doors because the male uniformed police officers, and those not in uniform who were political police, were there outside the doors and they could see everything, but they wouldn’t. The men were looking at us as they did the search.

“Then they took us to Holguin to a place called Pedernales (the Ministry of the Interior Training Center) and as if the previous search wasn’t enough, they did the same thing all over again. They stripped me, made me take off my blouse and everything, and then made me do squats while pulling down my pants. In this place they put us in the cells and we were there until Monday night, when they returned us to our hometowns but not without giving us a warning letter. They said they were going to charge us with Law 88, which we all know as the Gag Law. None of us ever signed those papers and we told them that yes, we were going to follow up, and then they told us we had been warned and we could end up in prison.

“They were trying to intimidate us and keep us from accompanying Reina Luisa to the cemetery every Sunday, and from undertaking the ZAPATE VIVE marches.

“Today my arms and legs are all covered in bruises and I ache all over. They gave it to Gertrudis in her chin and it’s very inflamed, and Belkis Barbara Portal was also beaten very hard, Reina Luisa could not feel worse and her children can’t even talk.

“I couldn’t see the men from the other towns because they took them to Guantanamo and other provinces after holding them prisoner there in Pedernales, but those I’ve seen here in Banes and Antilla have a lot of bumps and bruises.”

Ditzán Saavedra Prats sent me a text message from his cell phone just as they were launching the attack against them outside the Banes cemetery. Then I lost communications and I believed they had been arrested. A little later I called to get more information about what had happened. He said,

“What I saw left a big impression on me. I never imagined that they would attack a group of men and women and beat them in that way. The only thing we had to defend ourselves with was our voices singing the national anthem and saying ‘Long Live Human Rights,’ ‘Zapata Lives,’ and ‘Down with the Dictatorship.’ They used every martial arts technique there is, kicking us, dragging us, beating us. Some of them put choke holds on us and I thought I was drowning or that they had broken my neck. The men tried to protect the women, but it was impossible. There were many political police dressed in plain clothes; I don’t know where they came from but it wasn’t Banes because I know everyone here. Those dressed in police uniforms weren’t allowed to beat us but they were allowed to help them force us into the cars. They forced us onto the buses and if anyone threw himself to the ground he was dragged.

“Brother, I don’t want to overlook what they did to Reina Luisa Tamayo and the other women. She is a dignified human being and doesn’t deserve that. They beat them, dragged them, kicked them.

“Once they got everyone in the buses and the buses hadn’t started yet they came inside and beat everyone with even more fury. And what hurts most is that no one saw that. Those among us who had cameras had their bags quickly thrown out and they took away the cameras and the cell phones. There will be no record of that day because no journalists came even though we had announced so often that we were going to March; it seems strange.

“I denounce the political police and the Castro regime and say one more time that Reina Luisa and her family are in danger and that we, the members of the Democratic Alliance, will always stand by her and support her.”

This time I am limiting myself to only transcribing what my friends told me. But this is not everything. The testimony of other victims will unfold later. If the information mountain will not come here to Eastern Cuba, we will go the Mountain; through my blog we will cross the barbed wire so that everyone will know that we want Freedom but we are seeking it without weapons, without hate, without vengeance.