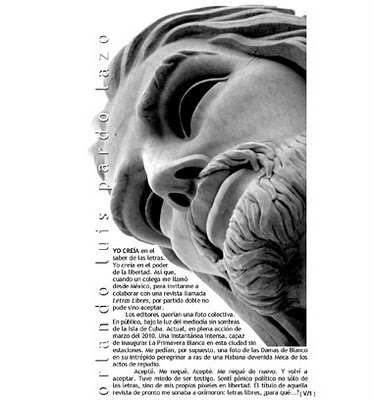 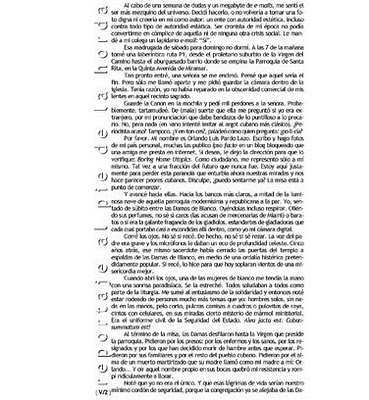 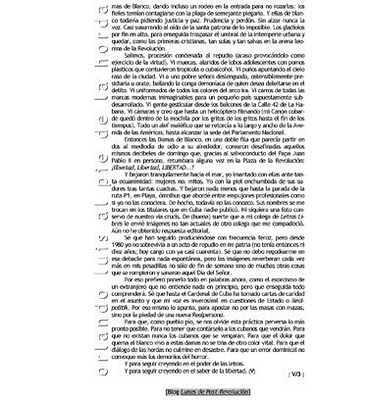 REPORT AT THE FOOT OF THE HORDE

I believed in the knowledge of writing.

I believed in the power of freedom.

So when a colleague called me from Mexico, inviting me to collaborate on a magazine entitled Letras Libres, I had no option but to accept on two accounts.

The editors wanted a group picture. In public, under midday light, without the shadows of the Island of Cuba. Currently, in full action of March 2010. An intense snapshot, capable of inaugurating the White Spring in this city without seasons. They asked, of course, for a picture of the Ladies in White in their intrepid pilgrimage leveled next to a Havana that had become the Mecca of the acts of repudiation.

After a week of doubt and a megabyte worth of e-mails, I felt like the pettiest being in the universe. I decided to do it, or I would never take a worthy picture or grow as an author: an entity with aesthetic authority, even against all types of static authority. Being a chronicler of my age couldn’t turn me in accomplice of that or any other social crisis. I sent my colleague a lapidary email: “yes.”

That dawn from Saturday to Sunday I did not sleep. At 7 in the morning I took the labyrinthic P1 bus route, from the proletarian suburb of the Virgen del Camino to the bourgeois district where the Parroquia de Santa Rita is climbed, in Miramar’s Fifth Avenue.

As soon as I entered, a lady climbed on me. I thought that would be the end. But she just called me aside and asked me to put the camera away inside the church. She was right, I had not considered the commercial obscenity of my lenses in that sacred ground.

I put the Canon in the backpack and I asked the lady for a thousand pardons. I probably stuttered. As (bad) luck has it, she asked me if I was a foreigner, because of my pronunciation that swerved from meticulous to precarious. No, no way (in vain I tried to imitate the most classic Cuban slang). A journalist maybe? Neither. And-then-what?, she relished the question like one who asks: po-li-ce?

Please. My name is Orlando Luis Pardo Lazo. I write and take personal pictures of my country, I publish many of them immediately in a blocked blog that a friend let me use online. If you wish, I can leave you the address for you to verify: Boring Home Utopics. As a citizen I represent only myself. Maybe a fraction of the future that never was. I am here precisely to lose this paranoia that now clouds our glances and makes us seem like worse Cubans. Excuse me, can I sit now? Mass is about to start.

And I approached them. Towards the clearest pews, halfway in the luminous ship of the super modern parish, and republican to boot. I, suddenly sitting amongst the Ladies in White, las Damas de Blanco. Hearing them breathe, even. Smelling their perfume, I don’t know if expensive (the are accused of being Miami mercenaries) or cheap or if it was the fragrance of the gladioli, standard of gladiators which they each carried almost hidden inside, like I my camera.

I closed my eyes, I don’t know if I prayed. In fact, I don’t know if I know how to pray. The priest’s voice was grave and the microphones gave him an echo of celestial profundity. Five years back, the very same priest had closed the temple’s doors behind the backs of the Ladies in White, in the middle of an hysterical ordeal, pretendingly popular. If I prayed, I did it so that today, winds of brighter mercy would blow.

When I opened my eyes, one of the women in white extended her hand with a paradisaical smile. I shook it. Everyone greeted everyone as part of the liturgy. I joined in the enthusiasm of solidarity and then I noticed that I was surrounded by people much more tense than I: men on their own, holding nothing in their hands, short hair, graceful plaid shirts or striped t-shirts, belts with cell phones, in their looks a certain mystery of ministerial marble. It was the civil uniform of the Security of the State. Alea jacta est: Cubansummatum est!

At the end of mass, the Damas paraded towards the Virgin that presides over the parish, They asked for the prisoners: the sick and the healthy, the resigned and those who have decided to die of hunger before waiting. They asked for their family members and for the rest of the Cuban country. The asked for the soul of a martyred deceased, whose mother named him like my mother named me: Orlando… And to hear that name in their mouths broke my resistance and I fell apart ridiculously and cried.

I noticed that I was not the only one. And that those tears of life were our little security cord, because the congregation was already moving away from the Ladies in White, even making a point to not touch them: the faithful were fearful of catching the plague of such a prayer. And the ladies dressed in white, still asking for justice and peace. Prudence and forgiveness. Without ever raising their voices. Almost whispering at the ear of our lady of the impossible. The gladioli finally on high, to immediately trespass the threshold of the urban openness, and end up, like the first Christians, so alone and so saved in the leprous sand of the Revolution.

We went out, a procession condemned to repudiation (perchance provoking it like an exercise in virtue). I saw grimaces, adolescent wolves, howling with plastic jars holding tropicola or cubalcohol. I saw fists pointing towards the flat sky of the city. I saw a poor woman, foul-mouthed, ostensibly a convict or lunatic, dancing the demonic conga of one who wishes to delight in crime. I saw uniformed men in all the colors of the rain brawl. I saw cars of all the modern makes, unimaginable for a little country, supposedly underdeveloped. I saw people gesturing from the balconies of 42nd street in Havana. I saw cameras, and I think even a helicopter filming (my cowardly Canon stayed inside the backpack until the end of days). An entire evil alef that twisted wide and long across the Avenue of the Americas, until it reached the headquarters of National Parliament.

Then the Ladies in White, in a double file that seemed to cut noon’s hatred around them in two, chanted, out of tune, those same Sunday decibels that, thanks to the safe-conduct of Pope John Paul II himself, once resounded in the Plaza de la Revolución: freedom, Freedom, FREEDOM…!

And they went tranquilly to the sea, I magnetized with them amongst so much equanimity: women no, myths. I with skin soaking of their sweat after so many blocks. And they went to the stop of the P1 route, no less, in Playa, a bus that I boarded in between professional shoving as if I knew them. In fact, I still don’t know them. I mix-up their names in the headlines that nobody published in Cuba. I don’t even have a picture of our ordeal. As (good) luck has it, I sent my Letras Libres colleague not-so recent images from another colleague who pitied me. I have not yet heard an editorial response.

I know they are being produced with ferocious frequency, but not since 1980 did I survive an act of condemnation in my homeland (I had not ten years then; today I carry almost forty). I know that I must not trifle with this un-spontaneous debacle, but the images reverberate in my nightmares more and more each day, not only on weekends. Many other things were broken and healed on that Day of the Lord.

That is why I prefer to put everything in words now, like the exorcism of a foreigner who doesn’t understand anything in the beginning but will soon understand everything. I know that even the Cardinal of Cuba has taken charitable interest in the matter, and that my voice is implausible in matters of the State or Realpolitik. Precisely for this I write it down, to bet not for the masses with clubs, but for the piety of a new Realpersona.

So that, as my country, we may forget this perverse practice as soon as possible. So we don’t have to tell it to the Cubans who come after us. So that Cubans seeking vengeance never exist. So that the pain that burns these ladies white-hot won’t turn another vital color. So that the dialogue of the hordes doesn’t culminate in disaster. So that a Sunday mistake doesn’t convoke more demons of horror.

And to keep believing in the power of writing.

And to keep believing in the knowledge of freedom.