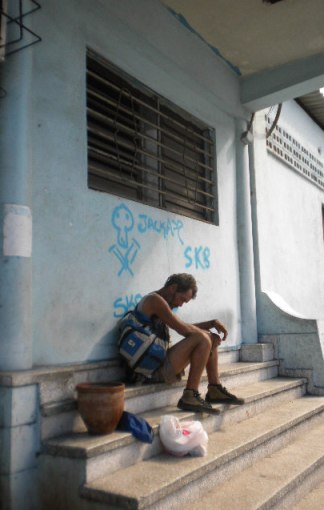 This evening, I wanted to buy cakes from the man who hawks his goods in front of my house. I can’t remember the conversation verbatim, but this is the essence of it.

He built a house of masonry with a roof of light materials in Marianao, behind the Military Technical Institute. In 2004, coming back from the hospital together with his wife and one-and-a-half-year-old son, he found his house had been demolished while their belongings where still inside. Some neighbours protested and tried to stop the abusive measure, considering the residents of the house were not home, and according to my pastry man, they were beaten and arrested. Since then they have appealed to the Popular Power, the Party and the Police, the latter being the one who demolished the house, without having received from them any document justifying the arbitrary measure taken against him and his family. The only explanation received – verbally – after his protests is that “it was illegal.” Astonished, I asked what they had done with the lot where his house used to be; I was flabbergasted when I heard it was now a garbage dump. Since he is accusing the three big aforementioned institutions of being responsible, no lawyers from the Legal Cooperative dare to bring the lawsuit, so I suggested he to turn to the Asociación Jurídica Cubana for help with his case. He thanked me, but he wants to wait and see if the process he is undertaking with a “pincho” will work for him.

Whatever the results, he is not going to get his house back, nor his baby’s crib, nor his cabinet, nor his kerosene kitchen, nor the years he’s been laboring trying to get an answer.