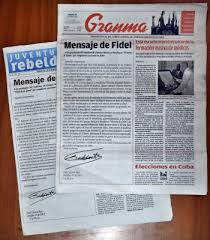 March 14 turned out to be yet another Cuban press day with more shame than triumph. As in previous years there were media warriors who committed themselves to forging a more critical form of journalism. I ask myself, With whom? With society and its leaders? That doesn’t work! Criticizing anything except those responsible for Cuba’s devastation seems to be the currency of today’s media soldiers, none of whom want to risk their perks and privileges, which in post-1959 language means “letting someone else take the fall.”

In general the key problem is the fifty-five-year-old Castro dictatorship, or more specifically the forty-seven year rule of its original dictator, a caudillo who has left a scar on the nation with his “do as I say” mentality. It has been a period marked by verbal violence, disrespect and discrimination against anyone who thinks differently. So, what or who is there to criticize? Capitalism and the United States, of course, as well as anyone who does not fall in line or sympathize with its so-called revolution.

The group in power has always been sensitive to its own interests but deaf to the real demands of society. The monopoly on information in Cuba is in the hands of the state, which officially prohibits the circulation of independent publications, freedom of association and a multiparty political system.

The most chilling example occurred on camera sometime around 2005, after the price of electricity had gone up, and featured the journalist Arleen Rodriguez. During a visit by Fidel Castro to the program Mesa Redonda (or Roundtable), in which Rodriguez participated, she raised complaints about the increase in electrical rates. With obvious annoyance, he issued a veiled threat: “Your husband is a friend of mine.”

Then there was the writer and poet Heberto Padilla, founder of the organization Origenes (Origins). In the 1960s he was forced to publicly denounce his colleagues and made to commit hara-kiri with the well-worn blade of extortion.

As I have said on other occasions, I personally believe that our communication professionals neither have nor feel the freedom to express what they truly desire or what is of concern to much if not all of the population. Thus there can be no true transparency of information to facilitate and encourage freedom of expression for industrial workers or for society in general.

Unless they themselves turn away from the violence that destroyed Cuba’s democratic institutions, which now exist to perpetuate power and to maintain a dependent and manipulated press, they will not be able to achieve what government leaders have wanted for a long time. By “resorting to political flirtatiousness” when talking about the current system, as is routine in the Cuban media, they rely on theatrical props to give the false impression that in Cuba there is freedom.