Since yesterday, July 21, Angel Santiesteban Prats is in an unknown location.  I will now relate the events that preceded this new arbitrariness on the part of Cuban State Security. 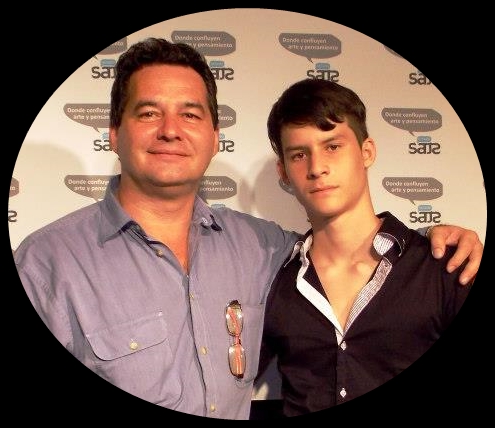 Joining him in his helplessness is his younger son, Eduardo Angel Santiesteban Rodriguez, 16 years old, the son of Angel and the woman who plotted against him with State Security in order to incarcerate him.

The youth — once old enough to escape from the clutches of his mother — asked to tell the truth about what had happened and how he was manipulated by her and by the Castro regime State Security to testify against his father.  Here is the link to his statements.

Obviously, we are very worried about the fate that may await the boy, for we already know through Angel’s own experience that no apologies are made for harassing and incarcerating minors.  In fact, Angel learned the drama of prison at 17 when he was jailed for saying goodbye to his three older brothers who were planning to leave the Island on a boat.  The escape was thwarted, the three “deserters” were captured, along with the youngest (Angel) for “harboring” them.  After a year and a half of incarceration, he was freed because saying goodbye to his brothers was deemed “not a crime.”

But no one gave him back the lost time and the hard experience he lived through, which – justifiably – became prime material for his prizewinning literature widely regarded for its unflinching realism and strong condemnation of the prison system, among other criticisms.  Angel has already well-explained how the Regime endured this literature without taking much action, awaiting the opportunity to attack him directly, which happened in 2008 by opening the blog and publicizing everything that was of the public domain.

Now the son, Eduardo Angel Santiesteban Rodriguez,  worthy seed of a valiant one such as Angel, runs grave risk of going through what his father did, or even worse. Eduardo Angel already has told what State Security did in collusion with his mother, Kenia Rodriguez Diley.

With regard to Angel’s own situation, the Regime continues to punish him for his upright position against it, and does not back down in its efforts to complicate all the judicial interventions to which he has a right by law.  The objective is to eventually water down his claims because they do NOT have any argument that can sustain all the false accusations hanging over him, now that his own son told the truth, unmasking the dictatorship’s judicial farce.

Angel declared on the blog:

“My family has just, coincidentally, found out that the Review Department has sent a letter to my lawyer Lourdes Arzua, who substitutes for Amelia Rodriguez, who was cut from service for six months, where they informed her that I have asked not to have legal representation, which is completely false.  I suppose that the “misunderstanding” is due to my call to that Department, in order to find out if the file had arrived in their hands, after the tribunal denied the number and my name matched.  My lawyer appeared in order to clarify that the number and my name were correct.  Although it appeared a joke, because that number — 444 — was that of a police serial that in 2012 was shown on Cuban television.  I suppose it has to do with some joke that the bosses played with my case.

I was assisted in the call by Chief Oslaydi, who has just been ousted, perhaps for assuring me that she “would correct it and that she would pass the verdict to the Ministry of Justice, which was who, definitively, would determine what measure to take in my case.”  The last time that I spoke with her, her affable and polite manner had changed.  Her behavior was coarse.  I supposed that she had already been visited by State Security officials, and they dictated to her what to write in my case, just as they did with the tribunal that “judged” me, then on Appeal and now on Review.

I always say, I am not naive, that the procedures to restore justice in my case are not for the government to straighten out, because they have never done it, they have never recognized an error, the “Revolution” is not mistaken, thus, its governors are perfect; complaints are made in order to continue sliming people and one day the truth may be known.  Justice demands it because that is our reason for being, what has us jailed, therefore, we must continue forcing them to grow their institutional evil, which they do by refusing to accept the truth as justice.

For my file to arrive at the Review Department more than a year has passed, when normally, and according to their laws, it should take no more than three months to issue an answer.  Once they had to accept the Review, six months from the filing, they invalidated my lawyer Amelia Rodriguez; now they send a letter to the office in a new effort to invalidate my representative and, as in the “trial,” leave me once more “legally defenseless,” as attorney Miguel Iturria, who was my defender then, recognized.

In recent days my lawyer inquired about the course of the file, and they informed her that a document “of the cause” is missing, which the tribunal must present; which contradicts what the ex-chief told me, that the file had already been delivered to a specialist who was working on his exhausting review.

All this foolishness by State Security, I feel it like the kicking of the hanged man.  If they thought that once I was incarcerated they were going to sap my strength, I cannot think anything other than that they calculated this as if they themselves were in my place, but in my case, my strength to fight for the liberty of my country has increased.”

The day after denouncing this new judicial hoax, he declared:

In the most extreme example of “the secretiveness of the State,” State Security is preparing my transfer to a border patrol unit.”

For days now a rumor has been circulating that is now taken as fact, given that the prison authorities await my transfer to be completed so that they can transport a Minister and a Vice-Minister of Construction who are serving sentences for “diversion of resources”.  There is no way that officials will allow these prisoners to coincide with me, fearing that I will obtain information from them and later divulge it on my blog.

Following the escape of a prisoner and his arrival on the coast of Miami, State Security ordered a reinforcement of the surveillance being conducted on me. They established a 24-hour command post and they’re watching every move I make within the settlement.

A few minutes ago, they just ordered some bars to be soldered to secure the place where they will take me, and they said these had to be in place before tomorrow at the aforementioned border patrol unit.

Evidently, they will keep me there more watched and isolated. Thus begins another chapter in this journey of injustice, all for my my dangerous crime of thinking differently.

I reaffirm that I have more strength than on the first day of my incarceration. It is an honor that they commit these extreme acts against me, for exercising the faculty of thinking and expressing my opposition to the dictatorial regime that has been subjugating our country for more than half a century. Meanwhile, they tolerate murderers, drug traffickers and rapists, barely even harassing or watching them, as they do in my case.

Long live live Cuba, and may She Live Free.

The rumor became a reality

Ángel was transported yesterday, illegally, without his next of kin being notified nor him being permitted to make a telephone call. Since then, he has been held at an unknown location.

The recent confession by Ángel’s son regarding his father’s innocence, and the fact that just a year ago (2 August, 2013), Ángel was transported illegally and arbitrarily, without his family knowing, to the settlement where he currently resides — and that he was held for four days at a location unknown until his relatives investigated the matter outside of official channels, causes us to think that this time the punishment could be more severe.

The sadism of this Regime is enormous, and they are hitting him where it hurts the most: his son. Evidently they’re trying to punish the father for the courage shown by his son, isolate him even more, and prevent him from continuing to denounce to the world the reality of how it is with him and with Cuba.

Now, we are not speaking solely of accusations of human rights violations committed against an adult who is dedicated to his country’s liberty. We are now dealing with a grave violation of the rights of the child during the Kafkaesque proceedings visited upon the father. They used the child as cannon fodder to falsely incriminate a dissident courageous enough to call Raúl Castro a dictator. Now, this child become an adolescent – who has provided a tremendous lesson in courage and honesty to the world – is at the mercy of State Security and its sadistic system for punishing those who dare express themselves freely. The boy’s helplessness is further increased by his father being not only encarcerated, but in a unknown location.

It is not an exaggeration to sound an international alert in support of Ángel and Eduardo Ángel. It is enough to witness the numerous cases publicized by the media regarding the abuses and punishments of the children of dissidents, including their incarceration. One such is the case of the three Alexei brothers, Vianco and Django Vargas Martín , who were jailed starting in late 2012, when the twins Vianco and Django were only 16 years old. They are the children of the dissident Miraida Martín Calderín, a member of the UNPACU [Patriotic Union of Cuba] and the Ladies in White. There is the case of an eight-year-old girl, Yanisleidis Olivier Reve’, daughter of Damaris Rodríguez Revé, member of the Ladies in White, who was held back a grade in school because of her mother’s activism.

From this post I call upon the international community to support Angel and his son, and I emphasize, once again, that the life and health of both are the exclusive responsibility of Raúl Castro. The world is watching and there is no longer any hiding it, even less in the sham accusations against Ángel, ripped apart by a mere boy.