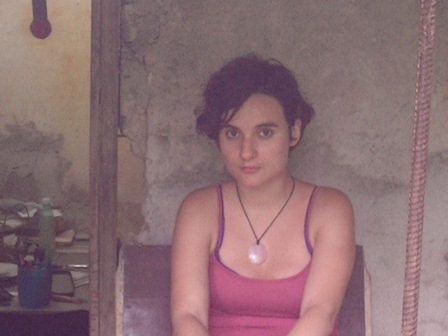 I am writing in order to release my anger, because this morning Agustin has been attacked by a mob of people from that neighborhood “El Globo” –The Globe– in Calabazar, from where I was able to take him out by force with love and hot meals.

He doesn’t live there any more, now he lives with me. But he loves that paradise lost between trees of mango, cherimoya (custard apples), weeds of all sorts where the hummingbirds go to sip nectar. There we hope to spend our retirement days, listening to the circulation of the sap strengthen the beating of our blood, with the respiration cleaner, in every sense, than in the city, because there is there a bit of the eternity of the growing of leaves that mocks the unfailing, shattered ambitions of all dictators of Cuba.

Some days ago he had an unfortunate family problem with one of his nephews and a denaturalized son and he had to return, to face the situation. These two young men were being spurred on by the neighbor of the the next fence over, the son of the neighborhood’s latest president of that aberration in Cuba that is the CDRs — Committees for the Defense of the Revolution — who envies Agustin even the ground he steps on, and who covets that little piece of land that the State doesn’t even allow you to truly own. This morning the exemplary “cederista” (“CDR-ist”), who to accentuate his characterization, even though it may seem a cliché, earns a living making little stamps with images of Che, which he later sells to tourists (one day we’ll have to dig deep and work seriously to inform the very misinformed Cubans, and the world, how many, and for what reasons, were those executed by that dark Jacobin Guevara when officiating as delegate of death in La Cabaña)… has led a neighborhood throng to stand in the way of Agustin as he was leaving.

The mother of the “cederista”, who suffers from lupus, which adds extra considerations when dealing with her, whipped by the envy that she couldn’t eradicate from her prole, yelled “gusano” (worm!) and threw two rocks at the windshield of the car Agustin was driving and broke it. To which Agustin, logically, has been unable to respond, and as he pulled further away he could hear the lady’s son yelling, saying no one could expect his sick mother to be held accountable.

It has been a trap. A few seconds before the stones were thrown, Agustin had told the promoter that problems between men are resolved without so much boisterousness and that if he wanted to fight he was willing to do so at a distance from that crowd. To which the maker of stamps, cowardly and vile, refused.

The authorities won’t do the right thing, we’re already accustomed to that. In fact there was a police captain who made a racket about whether if, on Agustin’s little plot of land, there lived “a man of human rights” who had to be done away with. We laugh at such stupidity and we are not afraid.

One would have to fear them for how cowardly and stupid they are, but when one has hope and faith in that it is not possible to permit the dictatorship of the State in Cuba to continue intimidating you, belittling you, humiliating you, abusing those you come to recognize as your brothers, you put up a fight with hope in the laws of the Universe, and in the most profound ones of the human soul, which always have imposed themselves against those of the tyrants.

But we are also ashamed that in our country, everyday Cubans like ourselves, even if they are policemen, suffer such a level of ignorance that they destroy their own rights before the dictates of a single “species” to whom it is not convenient to recognize those Rights. But it is fair to say that on this occasion the problem has come up simply as in the whole of Revolutionary history: someone covets another’s space and sets in motion the already rusted and crumbling mechanisms of a society that is segregationist, ignorant, vile, incompetent, that provokes pity for being more like beasts the men and women faithful to their model. And that at some moment, as in every country led by a Communist party, aggravated by the ambition of a specimen possessing an ego such that he has tried to usurp the place of God (even as an archetype given that they weren’t nonbelievers), was able to legalize acts of repudiation against citizens, the pogrom organized by the State, the segregation, the arbitrariness, the ideology that biases the perception of the world, of rights, of duties, and turned into a social practice all that a healthy society would condemn: Where is he, in what prison, the Revolutionary Communist son of a bitch who attacked with a machete an oppositionist of the regime, over there in Oriente, last year? Those neighbors, the Security of State decorates (with honors); but the truth, before the civil law of the civilized world, is that he gravely injured with extreme violence another human being and should have gone to jail for that.

A sentiment of enormous revenge is born: “Vengeance is mine, I will repay”. A need to once more embrace hope: Blessed are those who hunger and thirst for justice.

And an overwhelming nostalgia for another Cuba, a Cuba where the law won’t be political, nor military, nor mafioso, nor tyrannical. Cuba turned into a civilized country, where there exists citizen security and the respect for Human Rights and a Civil Society, holding clear notions of what today forms the dark part of our vocabulary: civil rights. Liberty, liberty, liberty. Responsibility, decency, honesty, respect for the law, peace. There is none of that in Cuba, only the series of ideological artifices that have attempted to usurp the meaning of the most handsome words to be born after a painful birth in our mistreated humanity. Why must I continue crying over nostalgia for the truth?