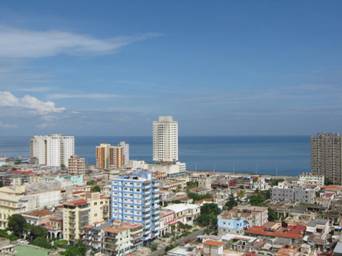 Last Monday I managed to get off unscathed and in one piece from a Route 27 bus, between stops, at 17th and D, thanks to the kindness of the driver, who decided to give me a chance, opening the doors of the bus there.

I took F Street and headed toward Linea. With horror I could observe how destroyed the area is and the number of improvised shacks there, in what in other times used to be the garages and front porches of the old family residences, displaying without the slightest embarrassment architectural cellulite and scoliosis, diseases which almost all new buildings or renovations suffer today. Unfortunately, that day I had not brought my camera, which I had left at home charging. The heat was exhausting and the sweat rolled down my eyelashes, causing me to glimpse as through a veil all those architectural horrors that I was walking toward.

When I finally reached Linea Street, which shimmered like the desert because of the intense sun, I thought I was hallucinating when I saw in the middle of the sidewalk a huge Santa Claus in plain month of June. At first I thought it was a performance, because we are still in Biennial, but there was no audience. As I approached, I saw that it was an advertising gimmick of an unsuccessful street vendor, to attract attention.

Finally I reached the large building where the friend I was going to visit lives. As usual, the main elevator was out of service, leaving only the freight elevator running. Both are ancient Otises from the fifties. I got into this thing alone, which I don’t like to do, and pushed the button for the 19th floor. All was going fine until it stopped on the 10th floor, to pick up a young woman with a little girl about two years old. She punched 13 and, having barely risen one floor, we became stuck between 11th and 12th.

Never before had I been trapped in an elevator, although many times I had thought that it could happen to me. I kept calm, following the example of serenity and peace that the little girl gave us. I knew that the presence of that little angel would bring us luck. I gave my cell phone (which happened to be charged) to the young woman, so she could call the manager, because she lives in that building, and knows its intricacies. Immediately we heard the voices of those coming to our rescue. We put on the emergency (break) and got to work, listening to the instructions that came from outside, to find the famous lever and the black button that had to be pushed, so that they could open from the outside. As soon as we accomplished that, they opened the door to that floor and we saw that indeed we had stopped between two floors. Thanks to the fact that the small window in the door was broken, a little air came in to us.

Naturally, they got the little girl out first. The young woman jumped and almost fractured her ankle in the fall. I, who suffer from vertigo, looked sideways at the dark hollow of two quarters or so wide that was lost in the void and told myself: “Don’t look down, you have to get out.” Any which way, since all residents of the building have been putting up iron gates to protect themselves, adding an uncalculated weight to the property, taking advantage of this architectural error, stretching first my arms and then my legs, I grabbed the bars of the door to the apartment closest to me, like a spider, to get out and let myself fall onto the landing of the service stairwell, to the applause of all who were watching the maneuver.

Fortunately, there was a happy ending. But once I had calmed down, from the 19th floor, observing the beautiful view, I started thinking that with all the gates that all of the neighbors have added around the exits from the elevators, the day there is a fire it will be very difficult to evacuate them.

Translated by: Maria Montoto and others