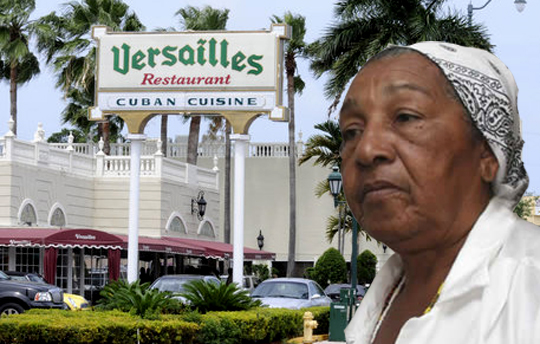 If, at the moment she stepped foot on U.S. soil that June 9, 2011, someone had whispered in Reina Luisa Tamayo’s ear that barely seven months later, this January 31, 2011, she would be at the Versailles Restaurant not as a heroic mother, but as a woman in need of support and understanding; no longer a protagonist of a campaign to defend universal human rights for which her son died, but rather in a campaign for her own economic aid, she wold have thought it was one more of Castro’s manipulations.

Too many lies had been targeted at this humble woman who, in the midst of her pain, had to see herself on Cuban television, spied on by a hidden camera in the office of her son’s doctor, maligned, even about her integrity as a mother.

Seven months ago Reina Luise appeared before other cameras, at the Miami International Airport, with the ashes of her poor son in her arms, surrounded by a delegation of activists and leaders of the exile — including a federal congresswoman — receiving the treatment of a heroine: admiration, promises of aid, family invitations, a site for the eternal rest of her son. The media fought over her. Everyone wanted to talk to her, congratulate her, honor her. Reina Louisa was news.

Behind the scenes, the only ones ignorant of what would soon happen in their lives, were the twelve family members who sought political asylum at her side, and Reina Luisa herself.

Recent statements by the Lady in White, offered to the journalist Pedro Sevcec on his program “Sevcec a Fondo” of América TeVé, where she stated explicitly that on her arrival in the United States she was manipulated, and that she and her twelve family members felt cheated, and where she tried to keep her voice from cracking when she responded the question of the host about whether she regretted coming to this country, were the sad time bomb that we all knew would eventually have to explode.

“This has all been a deception, since we arrived, first they told us one thing, then they told us another, and at the end of the day, the truth is we don’t know what’s what. Everything becomes political. I’m not political, I don’t engage in politics… what I lived in Cuba, I did in Cuba. My principal objective here is to work and I can’t figure out how to do that.”

Lately, Reina Luisa prefers not to give interviews. It’s easy to see why.

But now she has broken her silence and returned to the news, this time to look at the promises that lured her to American soil which turned out to be unreal, to present how she and her family have been simply used by a political and ideological machinery opposed to what harassed her in Cuba, the real story has surfaced. And in a very painful way.

First the family was lacerated by the Cuban government’s repression. Then, the sordid reality of a distant exile, where many end up dying of a badly healed nostalgia, and where those who don’t know how to care for themselves only have one option in the range of possibilities: to never come.

Would it be wroth it to investigate the history of the broken promises made to this family by the exile organizations and leaders? Of course. Not to corroborate what we already know, but to demonstrate how much these humble Cubans were lied to in order to bring more victims to Miami, at any cost.

It would be worthwhile to ask who told thirteen people, with poor educations, and a woman of 65 with health problems, that they would be supported indefinitely in a city where everyone has to strive not to increase the existing 11.5% unemployment figure, and where thousands of those born here, bi-lingual, and with full knowledge of the society, cannot get jobs to support themselves, or must work as cleaners — as Reina Luise states she has had to do — in order to pay their bills.

When Reian Luisa, implored from Banes, Holguin, to change the family’s original destination from Arizona to warm and “known” Miami, she thought she knew what she was doing. That is: to arrive at the place where her comrades in the cause and pain could better help her and hers. The efforts of the Chair of the Foreign Affairs Committee of the House of Representatives, Congresswoman Ileana Ros-Lehtinen, turned her request into an immediate order.

Today, Orlando Zapata Tamayo’s mother is learning her lesson in the most difficult was possible: in free societies, not only do we enjoy inalienable rights, we also contract enormous obligations. The first and foremost: the obligation to take care of our own lives. So we live in the best part of the civilized world. So we live in the society of the United States where, hopefully I’m wrong, Reina Luisa will probably never adapt.

To all this, the crossfire. From Cuba the propaganda apparatus laughs and shows a captive people the benefits of an exile, where icons, like Reina Luisa, say they feel betrayed seven months after arriving in freedom. In Miami, too many voices begin to use words like “ungrateful” and “unfair” to name the thirteen relatives of the martyr.

How do you explain to a woman who did not choose her own destiny, who has been a victim of it; a woman lacking education, without her Santiago birthplace and her adopted Banes, without an existence beyond the excruciating pain of losing a child; how to you explain to her that now she and hers must fend for themselves, away from the television cameras, away from the headlines, without organizations or politicians now too absorbed in election year politics?

How do you make her understand that the concept of the paternalistic State, where houses “are given,” where you don’t have to pay for health care, where if you lack sugar or rice the solution is to ask to borrow from the misery of your neighbor, that all that is in the past, that in this land not only is freedom won, but, above all, responsibility for one’s own destiny.

The image of Reina Luisa Tamayo this January 31 in the Versailles restaurant, appealing to her symbolism to move the sentiments of anyone who could offer a job in consolation for her and some of her family members, seems to me a huge sadness. And I suspect that those directly responsible for this reality don’t even know what has happened today to the mother of Orlando Zapata, nor do they care.