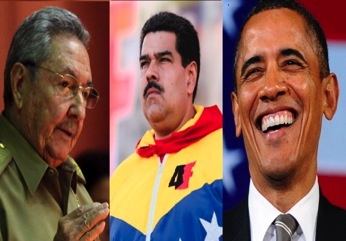 Maduro states that the Yankees [Americans] will not set one foot on Venezuelan soil, while Raul Castro will roll out the red carpet welcome for them, thus dismissing XXI Century Socialism.  Goodness, Maduro, neither political agreements nor ideologies are worth a dime in matters of capital.

Cubanet, Miriam Celaya, HAVANA, 16 march 2015 — The recent U.S. declaration that Venezuela constitutes a threat to U.S.National Security, as well as the sanctioning of seven employees of that South American country –six of whom are in the military — have offered the tenant of the Palace of Miraflores an ideal opportunity to call a meeting of the National Assembly to request an Enabling Law that will “allow for the defense of the country against any imperialist aggression.” And, of course, he got that law passed, though there has not been any deployment of maneuvers to justify such a call to slaughter. So far, the dreaded imperialistic onslaught has been limited to freezing the assets of the so-called employees “of the people” in U.S. soil and financial institutions (??!!) and forbidding their entry into that country.

Obviously, all indications so far are that some “Venezuelan boots” have trodden on “Yankee” territory, and not the opposite. While it is fair to say that the six military and civilian staff members affected by the empire’s alleged belligerence did not come to the US to make war, but to safeguard their personal profits – resulting from privileges granted to them by the government and who knows what other shady deals — while their compatriots grow poorer every day.

Chief Nicolas Maduro’s bleating trumpets have even shaken up the near-death specter at Ground Zero [n.b. Fidel Castro], who, happy for this opportunity – possibly his last — of waging another war of lies against the imperialist foe, has once again come out of his feebleness to congratulate the Joker for his “brilliant and courageous speech against the brutal plans of the U.S. government.”

It is conceivable that the Grand Island Madman might have already hung a map of Venezuela on the walls of his lair and riddled it with colorful tacks indicating where, according to his (nonexistent) judgement, Marines might land to invade Bolivar’s motherland. And to think that some of his detractors say that Mr. F. has no sense of humor!

Meanwhile, the “revolutionary government” of Cuba issued a statement against the interventionist act of “government authorities and the US Congress” that threatens Latin America and the Caribbean, a “Peaceful Zone”. A message which aims to brand a de jure Latin Americanist position, while Castro II and his cohorts continue with their de facto negotiations with that Giant of the Seven Leagues, which is, after all, the more tangible ace in the olive green deck of cards. The situation is confusing, as it is when one is playing both sides, but if one looks at it carefully, it encompasses a twisted certain twisted logic: rather than “to win” it is about not losing too much of the Latin Americanist pose, without risking too much the profits that are expected from a reconciliation with Uncle Sam.

However, this new North-South escalation, when many Latin American countries are facing very complex internal situations, is a preview of how controversial the approaching America’s Summit meeting will be, where, in addition, a new stage show will take place, since both the Cuban government and the Independent Civil Society are being invited to attend. For the first time, Cuban dissidents will be represented at a hemispheric conclave, a thorn on the side of the dictatorship which – like it or not — it will have to swallow.

The erosion of the system

Everything indicates that the warmongering media hysteria is looking to create an anti-imperialist climate in time for the Summit. The protagonists of the alleged US invasion of Venezuela are, and not by chance, these two aberrations known as revolutions, the Cuban and the Bolivarian. Both would be uncomfortable with an agenda that – among other points — will set out the constant human rights violations in Cuba and Venezuela. The satraps and their lackeys are closing ranks and preparing the trenches for the battle ahead. There is nothing as encouraging to dictatorships and nationalist unpleasant aftertastes as the winds of war. The predictable strategy might well be “Latin America against the Empire and its mercenary allies and traitors.” Or, if necessary, they might even, as a last resource, abstain from attending the meeting, under the pretext of imperialist hostility and impertinence against the sovereignty of our peoples.

So, if Chief Nicolás has launched this warmongering bravado on the advice of the Cuban regime, he had better think twice. After all, while oil in recent times has been plummeting, the dollar has been rising… while Castro II has been negotiating secretly with the common enemy. Sooner or later, Maduro will be left alone in that contest, because, as far as capital is concerned, not even the most rancid nationalists, political agreements or ideologies are held very firmly, though the dogmas taught in the classrooms of the Communist Party High School may preach otherwise.

At this time, the tower of the olive green power — in its funny transmutation to capitalist entrepreneurship — will have tallied their accounts to see who is worth more as a long-term ally, and perhaps their clerks have filed away XXI Century Socialism with the long list of system losses. So, while Maduro states that the Yankees will not take one step on Venezuelan soil, Cuba’s President-General, with more haste than pause, will welcome them by rolling out the red carpet.