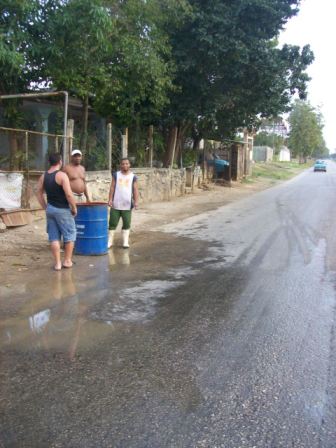 A civic event without any precedents throughout the history of the Castro reign inspired Punta Brava natives on the morning of Thursday, January 14th. To the grand surprise of the locals, a group of women took to the streets in a peaceful manner, holding up signs which demanded to the authorities, “We Want Water”. The unique demonstration began at around 50th Street and went on until 51st Avenue, where the Popular Council Headquarters of the Havana Community is currently located.

It was the first time that such a complex act was set in motion and promoted by local citizens all by themselves, without the presence of any members of the Democratic Cuban Opposition. “Such a daring attitude was expected sooner or later. If it wouldn’t have been these ladies, it would have been a group of other people who would have done it,” emphasized Angela, one of the upset women.

For a few days now, the mood in the town is more and more tense and worrying. Entire families stay up all night watching and waiting for any signs of water. Others, with extensive bags under their eyes, wait for miracles from the Almighty to be able to get some water in order to clean the most intimate parts of a sick elderly relative. Meanwhile, others become fed up with all the lies and jump from the position of obedient militants to nonconformists, as was the case with the son of a fervent communist on the block who, prior to the demonstration, placed a sign outside his home which read, “I don’t even have enough water to wash my a…”

But not everything was simple for the protestors. Along the way, the women were approached and intimidated by the town’s Sector Chief who quickly snatched the sign from the women’s hands. Later on, he wielded his truncheon in case the women had any intentions to start screaming anti-government slogans when they came to confront the delegates.

The community had been taken over by watch-dogs, paramilitary soldiers, and secret police. One high-ranking official gave the order to, “not accept any verbal aggression or political questioning on behalf of the citizens towards the delegates”. Immediately, two policemen showed up guarding the entrance and exit of the Popular Council, attempting to control the discipline of the locality with the help of a patrol-guard. The next morning, a rumor was traveling through town like gunpowder. The plastic garbage tank which stood outside the Basic Secondary Fructuoso Rodriguez School had been found burnt to ashes.

The mood could not have gotten more chaotic. The regime party members automatically speculated that the incinerated tank had been an act carried out by a counter-revolutionary. The situation was rather complex and convulsive, allowing for more political police agents to enter the scene, especially in the general barracks of 249th Avenue, where the well known informer Candelario Cruz, better known (through word of mouth) as “Little Mockingbird of the Park”. Cruz is a despicable character who voluntarily lends his own house in order to squash any activities carried out by the Spokespeople of the Neighborhood, 365 days a year. During this specific occasion he was in charge of watching over the movements of yours truly, in order to prevent any civil demonstrations.

But like the old saying goes, “When you don’t want broth, they give you two bowls of it”. Before the very eyes of that snitch, and of that amalgam of policemen which lingered around 249th Avenue, a huge argument broke out. The discussion was between the frustrated neighbors and the inefficient Delegation, seeing as the latter kept the local citizens from serving themselves water from a truck’s pipe, because it was “not their designated distribution day”. This argument led to the further rage and inevitable disrespect of the electors and the local functionaries.

“This has been an incomparable experience which will never be erased from the minds of all our neighbors,” expressed Alicia, who from afar seemed impatient and worried about the hostile scene which erupted when a tank arrived to the neighborhood. Later, and referring to the soldiers, she exclaimed, “Silvio is not the only one who protests and criticizes. Now, all citizens of this town are one big protest sign”.