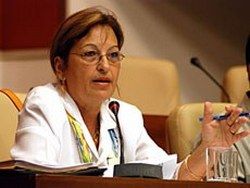 A Cuban knows that appearing to unconditionally support revolutionary ideas and stepping forward every time you’re called is better than to criticize. The road is bumpy, but the ride is always smoother if it is known that you are an enrolled member of political and mass organizations, especially the Communist Party of Cuba (PPC).

Better yet if you have a position in the government, this increases your chances of climbing the hierarchical ladder and receive training as a government cadre. If the historic moment requires the fulfillment of a task, one must assume the duties. It does not matter that you do not have the slightest idea how to run an enterprise or ministry. If you get stressed or you have no head for heights, there are always options.

Raúl Castro said in his last statement to the Cuban Parliament that “the true modern revolutionary is the cadre that, at any level” resigns when “they feel … unable to fully perform their duties or comply with new guidelines.” He also said that we are in era of reform and the opposition no longer represents counter-revolution.

Of course it is not good to trust too much. The head of government also said: “He who commits a crime in Cuba, regardless of position … will have to face the consequences of their mistakes and the scales of justice.” But so far, none of those removed from office have had to answer to the courts. The dismissal for incompetence is safer than a resignation for disagreeing with the policies.

Similarly it is possible to take deep breaths and resist until those house renovations are completed. The fulfillment of the task is not all sacrifice; friendships are made and those who have friends have a way in. Public office is used for traveling abroad or to get a scholarship in Germany for one’s child.

You can also open a Swiss bank account and if someone questions its moral integrity, do not fret, you are not the first one to do so. The offering of scapegoats is cyclical. Do not misinterpret, it is not malice. It is logical that, if everyone steals from time to time some head must roll eventually. The stagnation and backwardness of the economy is the responsibility of someone. When have you seen that blame falls to the ground?

The process is hard, but it transcends the personal, and has no larger consequences. It is easier to end up in prison for not working, than to omit or alter data in financial reports. The facts are not presented outside of a political trial. Even then, if you acknowledge the mistakes and correct your behavior—i.e. take a few insults—you can keep your status as a member of the party.

Look at the example of Jorge Luis Sierra and Yadira García, one a transport minister, the other a minister of primary industry. Both took on functions that did not correspond to their qualifications, and that led to serious mistakes in management. Today, they find themselves in jobs related to their specialties; or at least that’s what Raúl said.

The worst thing they endured was severe criticism in separate joint meetings of the committee’s political bureau and the executive committee of the council of ministers (by the way, the members of one committee are the same members of the other).

Yadira García, for instance, did a terrible job as head of the Ministry, mainly through her poor control over the resources allocated to the investment process, leading to their waste. Had she committed such offences as director of a base company, things would have been different. Today she would be at the disposal of the public prosecutor and accused of the criminal offence of misappropriation of financial and physical resources.

It does not matter whether it was due to fraud or inexperience; the law is clear and it sanctions the person who oversees the administration and squanders—or allows someone else to squander—financial or physical resources. The punishment increases if there are considerable economic losses. However, García Vera is a close friend of Raúl!

There is no comparison: it will always be better to operate from the top than from the bottom.  One remains certain that the level of misconduct will never be fully known. The Cuban press is official, not sensational; the code of ethics does not allow for corridor gossip, let alone gossip about a leader. That is the price and guarantee of being a cadre of the government.