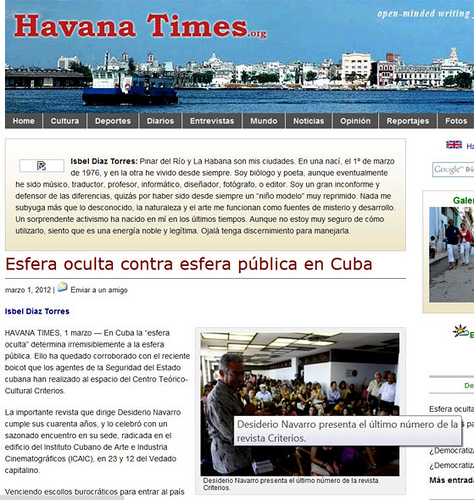 UPDATE — The text below is now from Havana Times, as translated by that site.

The Hidden Sphere Versus the Public Sphere in Cuba.

From the HAVANA TIMES, March 1, 2012
by Isbel Díaz Torres

HAVANA TIMES, March 1 – The “concealed sphere” irremissibly determines the public sphere in Cuba. This was corroborated by the recent barring of several individuals from the presentation of the latest edition of “Criterios” magazine at its office-center by agents of Cuban State Security.

Run by Desiderio Navarro, this important magazine is marking its fortieth year. To celebrate that occasion, a panel discussion was organized at its headquarters, located in the building of the Cuban Institute of Cinematographic Arts and Industry (ICAIC), at 23rd and 12th streets in the Vedado district of Havana.

Having overcome bureaucratic obstacles that had prevented the copies of the most recent edition of the magazine from passing through customs at the Havana airport, the prestigious translator and essayist invited renowned intellectuals to give presentations on their writings that appeared in that edition.

The central topic of the various presentations was “the public sphere in Cuba,” to which everyone interested in that subject was also invited to attend.

However, the invitation was perhaps not as open as Desiderio had thought and intended. At the entrance of the imposing ICAIC building, a large group of plain-clothes political police was there to determine — “live and direct” — who was worthy or participating in this “public sphere” of Criterios.

Consequently, at the very moment I entered the building, I found out that they had barred two members of the “Comite de Integracion Racial” (CIR). These are people who I don’t know intimately but to whom I’ve listened to with interest at meetings of the “Cofradia de la Negritud” (the Negritude Brotherhood), where they have regularly attended and cordially contributed their views.

Such arbitrariness bothered me greatly. I immediately thought of getting to Desiderio and inform him once I got to the ninth floor (where the center’s located), and try to address the nonsense in the occurring in the lobby.

I of course suspected that the highly critical blogger Orlando Luis Pardo (who had been just two or three people behind me), and Antonio Rodiles (the coordinator of the equally critical Estado de Sats website), would also be prevented from entering the building.

Seeing that these individuals never made it to the room, I informed Desiderio, who was already aware of what was happening. Still, there was no solution. Desiderio explained that the building belonged to ICAIC, and therefore he couldn’t determine what people could enter.

I could once again see how lacking in autonomy how fragile our public sphere is here. There exist public “custodians” who can so significantly skew debate, in this case by preventing access by important actors in the topic in question.

A good part of those there were very young people and the place was filled to capacity. What was significantly suspicious though was that as soon as the program began, many of them got up and left. Were they interested in the panel or not?

I listened attentively to the presentations by the panelists: novelist Leonardo Padura, University of Havana professor Jorge Luis Acanda, Temas magazine editor Rafael Hernandez, feminist Yasmin S. Portales; the editor of the Catholic publication Espacio Laical, Roberto Veiga; writer and former Casa de las Americas director Arturo Arango; and activist Mario Castillo. Except for Rafael Hernandez, all of them spoke in one way or another about the variable “concealed sphere” as a weighty ballast that anchors the necessary public required in Cuba.

They didn’t refer to it as “concealed sphere,” of course. For example, Yasmin referred to manipulation and arbitrary classifications made of Cuban participants in the blogosphere, while Leonardo Padura mentioned the systematic violation of his private correspondence.

Mario Castillo was the last panelist to enter the room, which we knew was related to what was happening at the building’s entrance. This allowed him to denounce that fact in a dignified fashion during his turn to speak.

One younger guy in audience who called himself an “opposition member” also spoke from the microphone — vehemently but politely — about the shameful situation of censorship that we are experiencing. The youth was vigorously applauded by the majority.

However, I must confess that I left before the function ended. I didn’t even buy the magazine that interested me so much. I felt like I was being suffocated in there where — unwittingly — many of us were taking part in a process that was carefully designed by the “concealed sphere.”

It’s conceivable that the ultimate goal of the barring was aimed at preventing “dissident” thoughts from entering and “contaminating” us. Nevertheless, these managed to get out (and hopefully it will become increasingly difficult to stop them). What I truly think those “concealed” forces were seeking was to prevent horizontal discussion, in this instance the debate offered by Criterios.

Their method of closing institutions has changed (or has been “updated,” to use the term currently in vogue). Now they prefer to gut all meaning, to restrict these individuals so that what remains are only “performances” by their former selves. It seems the authorities are the ones who dictate cultural policy on the island.

It’s more useful for this “concealed sphere” to cancel prestigious meetings such as those of Criterios. By introducing censorship and inducing self-censorship, they can discredit the magazine and prevent it from continuing to expand its avocation of pluralistic thought, where there is fertile ground for a libertarian spirit.

They’ve already done that to Temas, eviscerating the magazine that once suggested an awakening of minds. Now they’re going after Criterios.