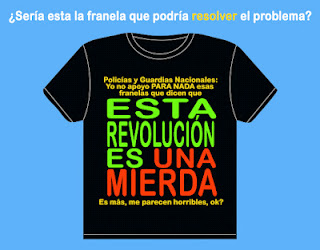 [Title]Would this be the T-shirt that could resolve the problem? [T-Shirt text”] Police and National Guard: I do not support AT ALL these T-Shirts that say that THIS REVOLUTION IS SHIT, and what’s more, I think they’re horrible, OK?”

At the launch of the magazine Criterios number 37, on February 28 at 3pm at ICAIC, according to what the authorized tongues tell us, the narrator Arturo Arango read “The sense of the public sphere in Cuba”, a text now circulating because of the reality of the damned Internet, which is everywhere.

I can not say anything about it. State Security — screaming and gesticulating violently — threw me out of the lobby of that institution, minutes before Desiderio Navarro himself rudely hung up the phone on me when I called to let him know what was happening nine floors before his very nose, as the plain clothes officials laughed at me, saying Desiderio Navarro authorized them to choose his audience.

The line didn’t even flinch. They were forced to march in single file to the elevator, as in a workers’ cafeteria. Most were white boys, cute, young, unknowns; there were a few black guys left outside, plus an ugly bearded guy with a tint of dissidence and signs of terrorist friends (OLPL); they would not jeopardize their ownership of the public sphere in Cuba. Hopefully they will now accuse me of racism.

I won’t get into the theoretical shit. The last issue of Criterios I have was smuggled through Customs itself, who seized it to get its director wound up a bit, just to put it in context. Obviously, being an agent of the enemy brings not a few advantages in terms of reading and liquidity.

So I went there more to expose the inquisitorial intolerance in Cuban that continues just like in 1971, when I was born. Simply the Decomposing State (including biological decomposition) now has fewer positions to “parametricize*” the army of excluded. Hence, we no longer have to bow our heads Arrufatically** until a MINIT official (in charge of the vice ministry of culture) decides to thaw our cases. Now the dead you slew are more media savvy than ever. Sorry.

I went there, by the way, to evaluate the response of critical observers assumed to be the hegemonic protagonist network, without their believing in it themselves. I went to capture the patriotic pulse of our time among hedonistic Havanans, beyond any historic compromise that doesn’t pass through a “Permission to Leave” stamp in their passports.

I went to demonstrate factually to the authorized bloggers who blog with no shred of autonomy, that they are not the interlocutors of any future. And I went, above all, to remain silent, which is what I do every time I manage to sneak myself into one of these complicit conclaves which are often news thanks to me (with my little video camera). I was bored with the repetition of the little whines and poses of the indoor intelligentsia. This tedium exhausts my adrenaline.

Arango now regales me with some delicacies: on Tuesday he personally criticized me, not in solidarity with the open doorway to his talk, which should have been suspended if he hoped for even an ounce of credibility.

Arango waxes eloquent on the critical thinking of the left and leaves aside the rest of the Cuban mental spectrum: capitalism, where we have lived for decades without too much fuss, having no reason to be for the centuries that have come to this famous little island. It’s a kind of migraine, I suppose (though the sense of the word escapes me because it calls forth the memory of a Russian novel).

There will be no diversity beyond the Revolution, the rest is rubble and aftertaste. The suicidal slogan — “Within the Revolution everything, outside the Revolution, nothing” — of 1961, today and tomorrow, will continue to stand, like Radio Reloj, an anachronistic mediocrity.

Arango lumps us all in the sack of a “new opposition that considers itself to be liberal democratic, with international visibility and the support of governments and other foreign sources who oppose the Cuban political process,” the wolf in the children’s tale, because he lacks the courage and the permission of his controllers to name us in public. To Arango the word “right” serves as a stigma to legitimize the non-dialog, when only Stalinist Cuba has been atrocious (from the time of the Republic, of course, because since then you can no longer speak of “isms” but only of another kind of Fidelity).

Arango questions the happiness the instant the internet puts a wedge between Cuba’s creators of today (an internet, by the way, forbidden to citizens who are forced to make many illegal connections). Paradoxically, in this debate about the sense of the public sphere, there are words that turn out to be unpronounceable. I would even say unthinkable. And I applaud. Literally, it seems perfect to me this way.

It’s hard to believe that revolutionary thinking is left to grab at the word “dissent.” Enough of victimizing the victims with Makarenkoesque generalizations or Krupskaya-like relativisms about what is good or bad for the poor little Cuban people, who never quite taught themselves to read. Please. Revolutionary thinking requires spitting venomous words, like “dissent,” so as not to disappear. That is the style of our governance.

For Cubans, the impossibility of dialogue is between the radical left and the nonexistent right. Cuba is a unipolar cloister in perpetuity. A monologue, with zero walk-on parts in the public legal space. A putrid space that, I’m sorry for the ephemeral officials, has been dysfunctional for a while (“within the institution, nothing”?), and there is no role to play at all in the resurrection of the Cuban soul that will reforest a country more drinkable than this one. And hopefully I’ll be branded as an e-vangelist as the colophon.

The internal enemy is an invention of the political police to depoliticize the country. Right now, as I type this narrative piece, more than one known writer friend shows me his Official Summons to appear before military counterintelligence, accused in secret of publishing in independent digital magazines like Voices (a thousand times the left has been invited and their NO is deafening) and in information portals such as Diario de Cuba.

I will leave it here. I want to write a column about, for example, popular pornography and drugs in democracy (on these points the Counterrevolution and the Council of State quizzically coincide) and to publish it in my blog without thinking twice. My blog, mine. I want to be intolerable, un-instrumentalizable (un-tool-erable). I also would like to write one on Oxyuridae*** and oxymorons, such as “Democratic Socialism.” I’m addicted to the improbable violence of freedom. I’ve already lost a couple of hours this week with the batty barbarism of apartheid for the 40th anniversary of Criterios.

Oh, and if I die in the blogosphere: don’t put flowers…

Translator’s notes:
*“Parametrizar” (the verb) or “parametración” was a process — from the so-called “Five Grey years” — that imposed strict guidelines on cultural figures and educators with regards to their sexual preferences, religious beliefs, connections with people abroad and other aspects of their personal lives. This policy was confirmed after the 1971 National Congress on Education and Culture. 1971-1976 later came to be called “The Five Gray Years”: Homosexual artists were ostracized, cultural influences from capitalist countries were banned, and cultural ties to Cubans living in exile were severed. (“Bad elements,” including homosexuals and others, were also interned in concentration camps known as “UMAP” — Military Units in Aid of Production.) The return, on Cuban television in 2007, of those figures responsible for these policies was a key event that eventually led to the reaction that sparked the beginning of the independent blogosphere of which OLPL is a part. See “The Intellectual Debate” for more background in English.

**Anton Arrufat: Cuban writer whose 1968 play “Seven Against Thebes” won a major prize from the Cuban Writers and Artists Union, and simultaneously resulted in his being condemned to 14 years of silence, unable to publish in Cuba.

*** The scientific name for “pinworms” which is also very close to the common Spanish word for the same. The reader is free to draw any conclusions he or she likes regarding this choice of topics and the penchant of the Cuban regime to label their detractors “worms.”