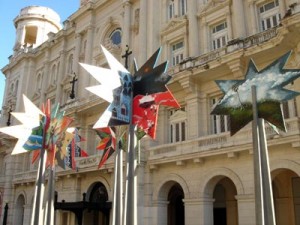 Most passers-by hurrying between la Manzana de Gómez and the former Havana Asturian Center, barely notice the presence of five unmoving palm plumes against the front of the neoclassical palace converted to a home for the collections of the Museo Nacional de Bellas Artes. Foreign tourists are accustomed to look up and take photographs, and sometimes they ask about the unusual “plants.”

The answer lies in one of the windows of the entrance to the palace, where 29 of the court’s artists painted works to honor the 80th birthday of Fidel Castro in mid-2006. The tyrant was gravely ill and had designated his brother as successor, but his executors ordered the creation — of symbolic value because the metal palm trees and ridiculous before the architectural excellence of the Asturian Center — to evoke the name of the Sierra Maestran hamlet which sheltered the then freedom fighters, who had spent a month escaping from the soldiers of the previous tyranny.

The five palms of the Castro brothers illustrate the subordination of art to tyranny. The sculptures are allegedly the responsibility of the Guayasamin Foundation, with the artists who accompanied the island despot in the opening of the “Chapel of Man.”

Not all of them illustrated the metal palm trees that “grow” between the flagstones of Parque Central and the Placita de Alvear. If we look up we can appreciate the zoomorphic dualism of the images of Manuel Mendive, the naked woman of Zaida del Rio, the white dove and the red circle of Moreira, the aboriginal with a mask of Sosa Bravo, the human figure of Jover, and drawings with fish, flags and the facades of buildings which embellish the inert plumes with their visual allegories.

More than honoring the tyrant in his eightieth birthday and marking the legend of the reunion with his brother successor, we have a street installation that eventually will change its location, perhaps to the village of Cinco Palmas, situated 25 miles from Media Luna and 40 from Manzanillo, in eastern Cuba, where hunger, isolation and lack of expectations are causing the exodus of its humble villagers.

The work, however, illustrates the connivance of many artists with centralized despotism and exceeds the limits of shame. Maybe it’s a way to avoid suspicion and maintain one’s position at the top of the heap, to secure retail space and foreign travel at the expense of others forced into exile or survival between galleries and local cultural centers, where they teach classes and sponsor community workshops.