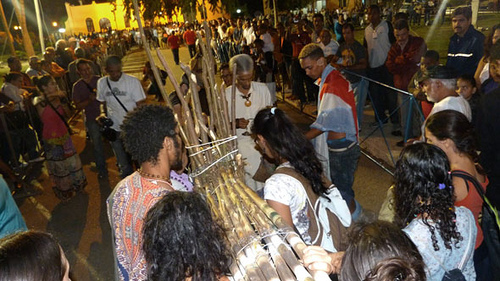 Just a magical whisper of the beginning of the universe to shatter eons of despotic discipline imposed from the discourse of power. It is the power to the State; it is the power of God.

Politics does not fit in a monosyllable.

The crazy girl and the loquacious group Omni Zona Franca, poets, performers of our post-nation, have broken many myths and taboos. Many lies and cheats. Much vile violence and violation of rights. Many fears and mediocrities.

Each December 17, for 12 years, collectively dragging an ungainly collection of branches to the church of El Rincon: literally, a garabato, a sculpture of wood…

Children, adolescents, women, elderly. Everyone carries it until they almost faint, it is not a task only for the healthy (they are not soldiers). It is a promise by the democratic health of the spiritual nation of Cuba. And the promises are fulfilled to the letter, naturally, not by dictation, without these hypocritical paternalisms to which people are so badly accustomed.

The Catholic Parents of El Rincon hold their breath every time the peaceful guillotine of the garabato is raised in the middle of the temple. The cries of FREEDOM, FREEDOM rumble. The Mass ends. God unfolds himself. The focus of attention is no longer on the main altar. It is the coronation of the future, not of the disease. There is no death possible with Omni Zona Franca, which is why they don’t fit within the thug’s logic of the Revolution. And then that magnificent murmur imported from great religions from less dazzling than the Catholic — but perhaps better cut to a human scale — emanates.

Each December 17, for 12 years and into eternity.