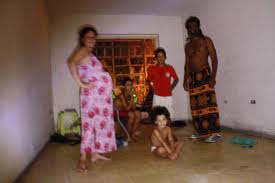 On the periphery of Havana, in the Alamar district,cases of illegal squatters inunoccupied buildingsare proliferating. The Government and the Municipal Housing Division (DMV), the entities in charge of solving the problem, are simply targets for the numerous complaints and pleas of the population.

“You’re not on the list of priority cases, there are people worse off, and they haven’t committed an offense like you,” said Rita, president of the Alamar Government, to Iris, on Thursday Feb. 9, in an interview, togetherwith the DMV Legal Subdirector.

Iris Ruiz, the wife of the OMNI-ZONAFRANCA coordinator, and her 6 small children, occupied the apartment 4 months ago, Number 1 of the Building E-83, Zone 9 Alamar, where they currently live without water or electricity. Her family was declared an illegal occupant by Resolution 1608/2011, which establishes that “in 2004 the house was confiscated, after the definitive exit of the owner, who went to the U.S.”

“It’s uncertain that the house was confiscated,” said Iris. “The Director of the DMV told me that the apartment is not included in the housing stock. After 2004, two people lived there. One of them is still on the records of Betty, the president of the CDR, even though they abandoned the country more than 5 years ago.”

“They left this apartment ruined, while other people needed it,” Iris added. Neighbors say a DMV inspector visited the site several times with apparent illegal buyers for the property.

“Rosaura, a neighbor of this building, has a son who had a heart operation, and she lives together with 10 people; Estela, a neighbor at Building E-79, has a paraplegic daughter and needs to live on the ground floor. These are two of the parties who tried to get the unoccupied apartment. The Government’s response was negative, because “the apartment is already taken.”

Who gets priority? Iris wonders.

According to the President of the Government of Alamar, at the municipal level no institution has the power to assign housing. Since 2006, this functionhas been the responsibility of the Provincial Government. “Only from me can you get an apartment, since our mission is to combat illegal behavior,” Rita warned Iris, after showing her the extensive list of squatters, waiting for eviction by the authorities.

Yaneisy, known as “the Twin,”already has lived through the experience of an eviction. She’s had a social-work case-file in the Alamar DMV for 16 years. Some time ago, she illegally occupied an apartment. “Theyevicted me with my 2 young children and put all my belongings on the street. They told me I should go back to my place of origin: a 2-room apartment, where 12 people were living together,” she said.

The housing shortage is a sad reality that increasingly affects a larger number of Cubans. Those scattered around by the usual shortage can’t afford to pay monthly rent for housing, let alone buy a house, whose prices don’t invite optimism.