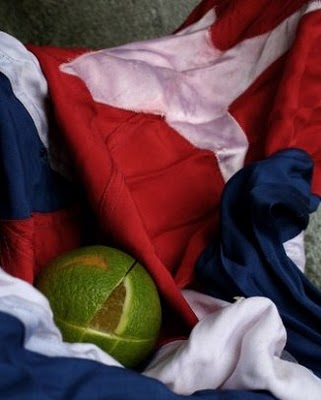 ALMOST AS GREY AS THE WINTER SEA

When we were so so poor that even our language knew misery.

Not only the anthology of English songs confused us (My Underpants Fell Down… a Micheal Jackson title seemed to say, Happy Willy… in exchange for I’ll Be Waiting by a foreigner, I Really Want To Go… signed in Cuba by a great American band), but we also traded these sad and silly love songs still echoing on the Progressive Radio program Night, although all of their classic speakers are now cadavers (Little Grey House… instead of Almost Too Grey… was perhaps the last straw, but it was a truly precious nonsense).

We lived in nonsense. In a bubble. The barbarism didn’t touch us.

Sometimes someone left the classroom for good. Sometimes because their father was a “refugee” from before my friend was born. And that word, refugee, echoed for me as mysteriously as the long system of socialist education, from primary school to high school, so that many times I watched my parents with disappointment because neither of them had anything to take refuge from, absolutely nothing (I wonder, curiously, if I myself couldn’t apply now for that mythic “refugee program”; in an interview with the anonymous State Security officials the possibility was suggested to me).

I confess I made the music all for me. I lived in a vanguard of the proletariat. The music got me out of the house and I became an adult between the legs of a teenager as heartbroken as my own virginity, there where the Ikarus buses stopped in Lawton. I’m about to type her name, that would be of the Y Generation, but better to keep my mouth shut. It was mine. And if you pronounce it out loud at these post-historic times, I miss the miracle of your private memory. It looks like a pompous verse from Julio Alberto Cadanova: hopefully it would come to be (there is nothing more poetic than bad poetry).

Music protected me from ridicule. If it didn’t make sense of my life, at least it gave a soundtrack to my life in the neighborhood. I was a dreamer among dreamers. This incredible naiveté saved us from the street or the jail cell or the cemetery. They were the proud eighties. We grew up with the first boxes of apples that arrived from CAME, an acronym for another century that no 21st century reader could translate for her children.

In 1989 they executed Ochoa and then the Berlin Wall fell, I think (the dates are a blur to me). They could have killed Ochoa to ensure the Berlin Wall would not fall. My music then was heavy metal, megadeath of all those who returned from their cut-short-careers in Eastern Europe, and also of all those who disappeared in the rapture of the exiled, or in those freak accidents that became popular with the Cubans over glasnost, perestroika in the former Warsaw Pact countries (there are bodies that the earth of Cuba never ate).

When I graduated in 1994 in Biochemistry, Faculty of Biology at the University of Havana, Black Sabbath had almost been erased and other drugloving dinosaurs with their Crown and TDK cassettes of 60, 90 and 120 minutes (the latter were the most fragile of the tapes).

When in 1999 they threw me out of the Center for Genetic Engineering and Biotechnology (April is the most noble month), and the sound began to weaken from the shared taxis, the almendróns. Repetitive choruses of incredible rather than irreverent violence. The tam-tam in the recombinant DNA of fools. All together now, which is another version of the Party unanimity. The mass is aborting a heart. Boring Home. Barring Home.

The zero years were light and super-alternative (I don’t know the significance of this phrase; I don’ t know what this paragraph can signify cut in half).

When the arid Ariel and Caliban cannibals of Status Quo Security kicked me and Yoani Sánchez (in this ungrammatical order) in the ass in a Geely auto imported from Tiananmen Square, I heard nothing. Or in any case I heard the paws bouncing off her meager body. And the snatchers from the car who harried us inside. But I heard nothing new. It was last November 6 and there was a deafening silence from inside the windows. And those lowered glasses marked, in the free air, as in the La Cabaña Book Fair of 2009, the trailing limit of the solidarity of the Cuban literary camp with the Island of indoors.

Nobody hears anything yet. We are megaless. We will never understand. The victims trade clothes with the executioners and then trade back. Carroñita.cu carousel. Our destination is decrepit. We are more lonely than the first characters of Zoé Valdés, who for me, in the nineties in Cuba, incarnated the hard-core rage of all true freedom.

This post is, moreover, self-conscious anthology. Do Re Me, dolor remix. Fa Sol Sharp and Fe very very minor. La Si Do, sorry for the lazy flat. Almost as grey as the winter sea. Grey little house like death in winter.