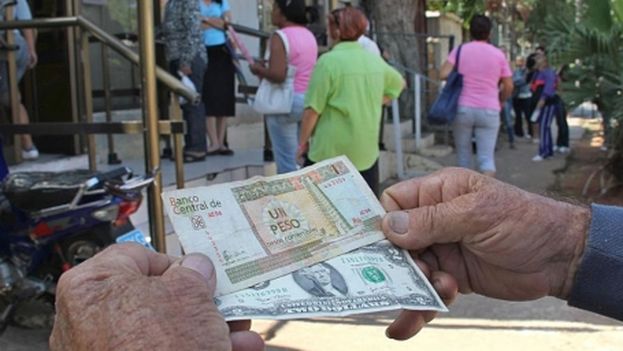 Eliás Amor Bravo, Economist, August 24, 2020 — Perhaps, possibly, together with salaries, housing and the daily worry about food, monetary unification has become one of the main problems for Cubans. There is proof of that. The article published in Granma with the title “Monetary unification is on the horizon in Cuba”, in which several specialists from the Central Bank of Cuba analyzed this question, has had up to now 71 comments (a record for the official Communist Party newspaper). And if they’re analyzed in detail, they are critical and show that many Cubans are feeling hopeless.

With good reason. The Government has spent almost 10 years on this matter, since it occurred to Raúl Castro, in 2011, that he would have to unify the two currencies that circulated on the Island, recognizing that this anomaly created a lot of problems for the economy. Since then, the issue has been like the Guadiana River in Spain, which appears and disappears along its journey but always is there without anyone knowing very well what the result will be, and what Cubans most fear is the consequence of monetary unification on their lives.

Let’s put the problem in perspective. What’s certain is that monetary unification and exchange rates aren’t matters that concern the Government. If they were, it wouldn’t have taken nine years turning over something that, almost always, for one reason or another, keeps getting postponed. Now the justification is obvious, if you take into account the direct impact of COVID-19 on the Cuban economy.

If the Government doesn’t care, it’s because it benefits from the dual currency. To begin with, it doesn’t have to submit the Cuban peso (CUP) to the international demand for currencies, so, being isolated from international global markets, its value, credibility and responsibility pass to a second plane.

The Cuban convertible peso (CUC) becomes an “intermediary” between the world currency and the nation’s, and thanks to this, the Government keeps a part of any transaction. Hard currencies are needed to stay on the business circuit, which is cut off from the economy, and only small tourism companies have begun to participate, although in a limited way.

The problem is that the CUC loses value as a monetary unit because the relationship between money and production is unbalanced, and its depreciation is perceptible. The Government has adopted several measures to promote the weakness of the CUC in relation to the CUP. However, what has happened is that both monies are sinking. A bad business.

The explanation is found in the Cuban preference for the dollar. Not only because it gives access to a greater number of goods and services but also because it’s a guarantee of stability in the medium and long term. Some have wanted to see a return to the most difficult years of the Special Period, with an eventual dollarization of the economy. Without going to this extreme, the strength of the dollar presents notable challenges to the process of monetary unification.

Why are the CUC and CUP losing buying power so quickly and the dollar now being exchanged at more than 1.25 in such a short time? The explanation is found in the economy. The Government collects CUC and CUP but lacks dollars. And people act in accord even more than is necessary by opening bank accounts to get the debit cards that allow them to buy goods and services, with a significant increase in buying power with respect to the rest of the population.

Some may believe that 1993 and 1994 are back, and they’re right. At that time, the Government stopped penalizing Cubans for having and using dollars; the shops collected hard currency; the export of services, especially tourism, was promoted; and, there was an opening to foreign investment and the authorization of remittances from abroad. In addition, the Government allowed the principal exporters to retain part of the hard currency that was coming in, and certain business transactions were done in dollars. Same lyrics, maybe different music, i.e. same argument, perhaps different implementation.

The problem then and also now is that the Government never adopted measures of discipline and economic control over salaries, subsidies and the other usual costs of the budget in order to cope with a deficit of two percentage points over GDP. This internal lack of control was perhaps the main obstacle to unification. In fact, the CUC rose precisely in an attempt to confront this internal and external lack of control. And thus, with the passage of time, a segment of “poverty” appeared in the Cuban economy, where salaries, security and social assistance, services, food products and many other activities were carried out in Cuban pesos, while another sector of the population enjoyed the advantage of having access to “strong” money and hard currency.

So that the Government has little interest in solving problems that are increasing, like the coexistence of the dual currency and exchange rate, which creates distortion in economic activity with one kind of exchange rate in the entrepreneurial sector (1 CUP=1 CUC=1 dollar), which doesn’t reflect reality and creates an obstacle for exports at the same time it stimulates imports. Problems arise with accounting, pricing, the use of currencies and their deposit, both formally and informally. The tsunami increases every time.

Karina Cruz Simón, a consultant at the Central Bank of Cuba, has explicitly reflected on the origin of the problem. In her opinion, the “stability” of the national money (CUP) is accomplished by ensuring that the printing of money corresponds with the evolution of the real or productive economy. A good choice, which makes us ask when this necessary equilibrium was produced in the Cuban economy.

We need only look at two points of data. With the economy growing at the end of last year by 0.5%, the participation of the money in circulation in the GDP approached 30%. It’s not strange that the spectre of structural inflation appeared from time to time and remains latent in the economy. The authorities solve this by undersupplying the shops. The inflation differential of the Cuban currencies compared to that of hard currencies (the dollar or euro, for example) helps explain the growing deterioration in the buying power of these currencies and, above all, in their credibility.

The bank consultant pointed out that “a favorable scenario for the Cuban peso to comply with its functions and manage to preserve macroeconomic equilibrium implies a type of change that approaches the offer and demand of hard currency, the existence of clear regulations for the printing of money, so that there is just the amount of money needed, and discipline between the Government’s income and expenses (control of the public debt).”

She adds that “it is important that there be coordination among the organizations charged with conducting macroeconomic policies, such as transitioning from an administrative direction to using financial instruments, so that prices can offer signs for a better performance for consumers, producers and the general planning of the economy”.

How can a monetary exchange like the offer and demand for hard currency be accomplished when the two Cuban currencies aren’t present in international markets, nor do they have that goal?

How can you establish clear regulations for the printing of money if the demand for money in the economy, especially coming from the State, doesn’t stop increasing?

What must be done to discipline the State in its management of income and public expenses, especially with a serious situation like the one posed by COVID-19?

The icing on the cake comes with that requirement of “coordination among the organizations charged” to achieve a “stable offer and quality of goods and services that can be acquired in the national money” and “the need to create conditions that stimulate people and businesses to save and obtain credit in the national money”. The question is, how is this supposed to happen? By Machado Ventura’s* “harangues”?

The conclusion is that the Central Bank of Cuba, dominated by the Communist Government and without the autonomy that monetary policy demands, cannot achieve monetary unification from the technical point of view, so this process will end up being the result of a policy decision some day when it’s least expected.

*Machado Ventura, Second Secretary of the Communist Party of Cuba, “harangued” the farmers in June 2020, calling on them to increase food production by cultivating all the land.