14ymedio, Havana, 25 August 2020 — Twenty volunteers, aged between 19 and 59, participated this Monday in the first clinical trial of the Cuban vaccine against covid-19, which was announced last week.

The pages of the official press show them dressed in a white pullover that highlights, in capital letters, half in red, half in blue, the name of the compound, Soberana (Sovereign).

The scientists leading this trial, which was conducted at the National Toxicology Center, hope that the administration of the vaccine will be safe, “with no more than 5% of individuals with serious adverse affects.”

In addition, they assure that they will be responsible “for ensuring good clinical practices”, guaranteeing security and reliability in the data that, as they explain, must be “traceable” and “reproducible”.

“The aim is for the study to be transparent and auditable by the competent authorities,” said Dr. Carlos Alberto González Delgado, head of the center’s clinical trials unit.

The Cuban Public Registry of Clinical Trials highlighted that the study “has the purpose of evaluating the safety, reactogenicity and immunogenicity” in a two-dose scheme. Participants will be 676 people between 19 and 80 years of age, without clinically significant abnormalities, leaving prior evidence of their consent. At each stage, two groups will be created, one between 19 and 59 years old and another between 60 and 80.

The study must end on January 11, 2021 and the commitment is that the results will be available from February 1, although they will not be published until February 15, according to this same source on its website.

In response to the user @CubanoEnCuba1, who stated on Twitter that Sovereign “is the Russian vaccine,” the research director of the Finlay Institute, Dagmar García Rivera replied: “You are in error. The Russian vaccine is based on an adenovirus vector, the Cuban one. It is a protein subunit. They are two different vaccine technologies. #Soberana is Cuban.” 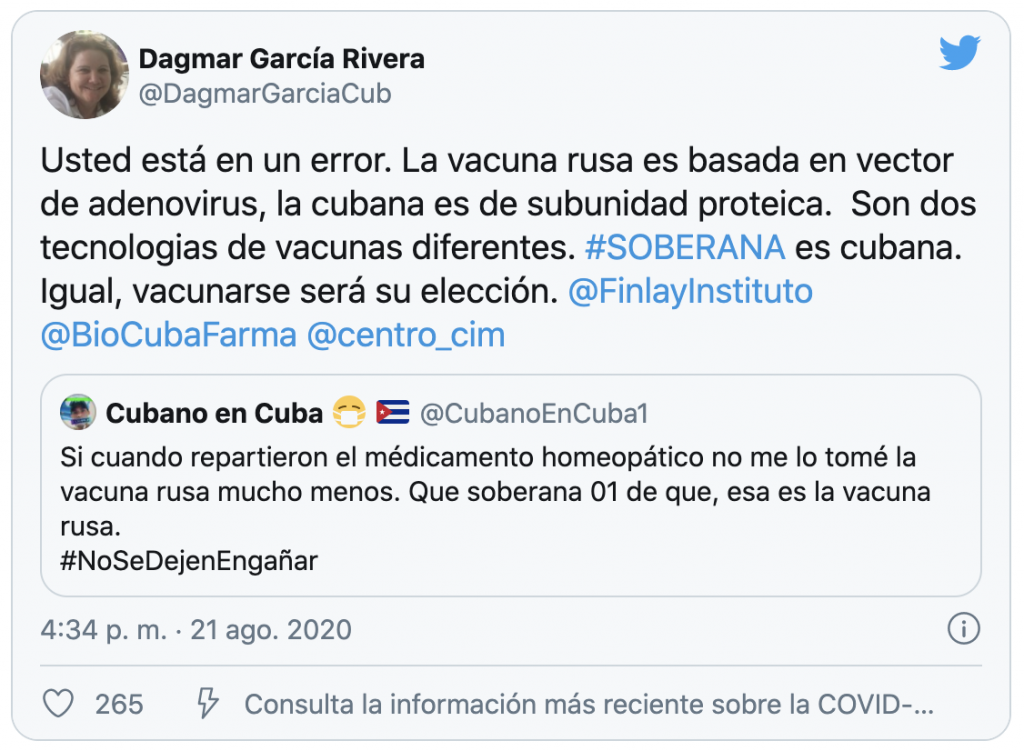 Beatriz Paredes Moreno, specialist in the direction of clinical research and impact evaluation of the Finlay Vaccine Institute, assures that in this first phase of the study, “at all times” there will be presence “of an active control” and the volunteers will all be evaluated in the same center where the test is carried out.

“Once the first week elapses and the result of the safety of the candidate vaccine is seen, we will issue a report to the regulatory agency, the Center for State Control of Medicines, Equipment and Medical Devices, which is in charge of certifying the second group of subjects, between the ages of 60 and 80,” explained Paredes Moreno.

An independent committee, made up of professionals from other institutions outside the center promoting the trial, such as the Pedro Kourí Institute of Tropical Medicine or the Ministry of Public Health, will monitor the development of the study. These entities are not independent from the Government.

According to the characteristics of the trial, of the first 20 volunteers, eight receive a low dose, eight a higher dose and four do not receive the vaccine. Volunteers are informed of how the process is progressing at all times and whenever they decide they can withdraw.

From the first day that this vaccine was announced under the name Sovereign, the Government did not miss the opportunity to fuel the fire of its political propaganda. Thus, Miguel Díaz-Canel has been engaged since May, when he spoke to the scientific community, urging to achieve “our vaccine to have sovereignty.”

The announcement coincides with outbreaks of Covid-19 in some areas of the country, especially in Havana and its closest provinces, and days after the president of Russia, Vladimir Putin, announced that his country had ready the first effective vaccine against Covid-19. In addition, it was reported the possibility of coordinating to produce it in Cuba in November of this year.

The Center for Molecular Immunology in Havana developed vaccines for meningitis B and hepatitis B. The Cuban health authorities also registered a therapeutic vaccine against lung cancer on the island and later in Peru.

Currently, there are dozens of scientific groups working around the world in search of a vaccine against Covid-19. Of the 18 experimental vaccines whose results are being tested in humans, three are the most advanced: the Chinese Sinovac Biotech, the so-called ChAdOx1 nCoV-19, from the University of Oxford, and the one developed by the American company Moderna.