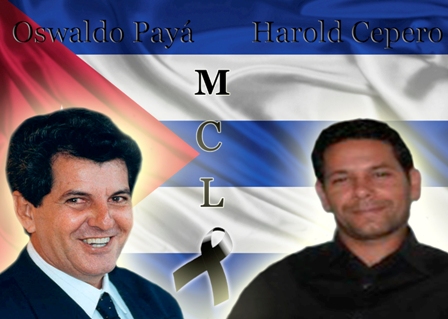 Executives and members of the Orlando Zapata Tamayo National Civic Resistance Front, raise their voices to condemn the cowardly assassination of prominent opposition leaders Oswaldo Payá Sardiñas, founder of the Varela Projects and founding president of the Christian Liberation Movement. This Coalition of Coalitions shares in the grief of this Christian family, at a time when we find ourselves besieged by mobs of political police in Batey Grúa Nueva in the province of Ciego de Ávila.

The Front, a promoter of civil disobedience in Cuba, promoter of protests across the country, just today, the eve of Resistance Day, condemned the death in suspicious circumstances of this dear brother of ours and in honor of his memory and his history of struggle we are committed to continue faithful along this road.

The Orlando Zapata Tamayo National Civic Resistance Front demands that the Castro regime allow a delegation of international experts to conduct a competent and impartial investigation of this terrible and lamentable event, and the Front opposes the Cuban government being given the opportunity to undertake investigations, because it is inconceivable to give them this opportunity or to ask the perpetrators of the crime to undertake the investigation and to show the traces and proofs of the crime they themselves committed.

It would legitimize the dictatorship, it would present the assassination of Oswaldo Payá Sardis as a coincidence, an accident, more the responsibility of those who crashed their truck into the car in which our brothers Harold Cepero and Payá were traveling, than those who ordered them to do it. And we hold two people primarily responsible, the Castro regime in the persons of the brothers Fidel and Raúl Castro, uniquely and the maximally responsible for the murders of Orlando Zapata Tamayo, Wilman Villar Mendoza, Laura Inés Pollán Toledo, Juan Wilfredo Soto García, and now this terrible blow against one of the most charismatic, important and serious leaders of the Cuban opposition.

Oswaldo Payá Sardiñas, the Front sends its condolences to your family and may God give you peace.

From Grúa Nueva, Jorge Luis García Pérez Antúnez, Secretary General of the Front, who will not shut up and who will not leave Cuba, now with more reasons than ever, now for you, Oswaldo, we will continue the struggle.