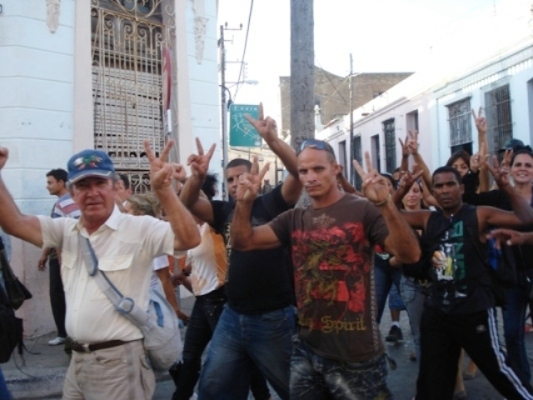 How often should a restless dissident be called to the account, how often should the dumbbell of repression fall heavily upon them?  It’s possible that the answers to such questions could be established in the withered manuals of the operations of confrontation with the enemy which the Cuban political police keeps guarded behind various locks.  It could be that they simply are just improvisations of the agents of each neighborhood or municipality.  Whatever the reason is for the harsh banging on the door, the vigilant motorcycles driving through the streets where dissidents live all night long, and the half-open windows of the neighbors, they do not change from one day to another.

When they took me to the police station this past October 9th, I soon found out that the dissident Jose Antonio Triguero Mulet was also there with me, just as has occurred on other occasions.  This is a man who is 67-years-old and has participated in protest marches, has been beaten, and has told the “authorities” more than four phrases that they wish they would have never heard. 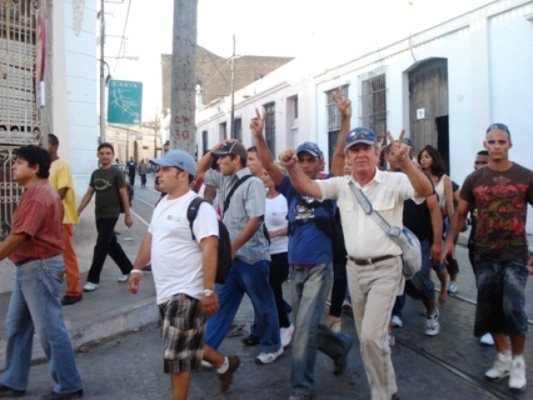 Triguero, at an age which is nearly twice that of most of the people who surround him, has slept in parks and terminals in order to evade vigilance, but also to accompany his brothers-in-disgrace.  He gets up on those high trucks to travel from one extreme to another on this Eastern land, and he is always willing to spit out the truth, to tell it like it is to whomever wishes to listen to his reality.  On one occasion he was detained by the henchman known as Rodolfo Cepena at the exit terminal of San German, heading towards Holguin.  He was being accompanied by his three-year-old grandson, and although he asked his repressors to halt such actions in front of the child, they paid no attention to this and sent him back  home.  The discussion changed in tone, and both suffered the shame of it, because they had no other options left.  Many people witnessed this event, and they will not be able to forget about it easily.  Another incident which has marked him is the pain he has felt when the repressors go searching for him at his house, in front of all his daughters and grandkids.  They come looking for him, a man who only does good deeds and simply thinks differently than those who govern Cuba.

One day, he told me that he was raised amid a family who only knew how to work to try to do the right thing.  During each detention, he has told me that they talk to him about the tomb of his parents, but they know that he is not a delinquent.

How often do they have to call a dissident to account? How many weeks or months apart do they have to remind him of the grim faces of the interrogation specialists, with their slaps and their pistols on their belts?

How often do they have to ring the door, hand out their papers crossed in red ink, the deafening whistles, the family shaken awake and let to know that “Security” is still after them?