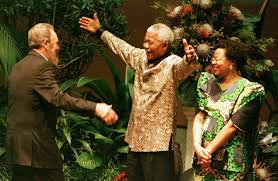 Time goes on and the funeral of the famous first black president of South Africa, Nelson Mandela, still occupies the pages of the press. Almost everyone feels indebted to praise the infinitely glorious Madiba, re-editing, in countless paragraphs, the deceased leader’s life and seeking to enhance his virtues persistently, to the point that we no longer know for sure if Mandela was a human being or a saint on earth. It is praiseworthy to remember with admiration and respect people who have realized valuable deeds, but I don’t personally react well to icons, paradigms or however they are defined.

Well, then, for all good things Mandela did for his people, for his example of relinquishing power when he could have retained it, due to his charm and charisma, his ability to forgive, so necessary and lacking among us, and all the good things he did throughout his long life, but I prefer to remember him as the man he was, an imperfect individual, as all of us human beings are, which puts him in a closer and more credible position in my eyes.

So, in the presence of so many stereotyped speeches and so much politicking brouhaha deployed at the funeral of a deceased who may have wished less fanfare, I decided to honor him in my own way: celebrating his existence because he lived to fulfill such lofty mission as freedom and justice for his people, during the pursuit of which he suffered repression and imprisonment, just as Cubans aspiring to the same ideals for their people are still suffering, as those who have lived in the confinement and injustices of a dictatorship not just for 27 years, but for over half a century.

But I will allow myself a special tribute to Madiba by modestly imitating him in forgiveness and reconciliation: I forgive you, Nelson Mandela, for the friendship with which you paid tribute to the vilest dictator my people has ever had, and for the many instances on which you exalted him and gave him your support. I forgive you for having been wrong in granting privilege to the oppressor instead of the oppressed, for placing your hand –redemptive for your people- on the bloodied shoulders of the one who excludes and reviles mine. I forgive your accolade to the myth that was built on violence, although you were a symbol of peace for humanity. I forgive you for having condemned us though you hardly knew us, forgetting the tribute in blood that my people made in Africa for which you, like a fickle mistress, thanked the satrap, who has never had the dignity to sacrifice himself for us, for you, or for your kind.

I forgive you, then, and I am reconciled with your memory to keep remembering and respecting the best in you. I know many, with vulgar hypocrisy, will demonize me for questioning you, but they won’t hurt me, because my soul is hardened by virtue of having been attacked and criticized before. It is my hope that this time my detractors will be so consistent with your preaching of kindness they seem to admire so much that they will eventually forgive me. May you also forgive this Cuban’s audacity and irreverence, who believes in the virtue of the good works of men, because she has no gods, but I was not able to resist the temptation to also utter what’s mine in the hour of your death.

And if either you or the mourners of the day won’t forgive me, I don’t care. At any rate, it will be further proof that, deep down, you’re not perfect; at least we’ll have that in common. Don’t take offense, in either case, you were a great person, and I will never match any of your many merits. Rest in peace, sincerely.