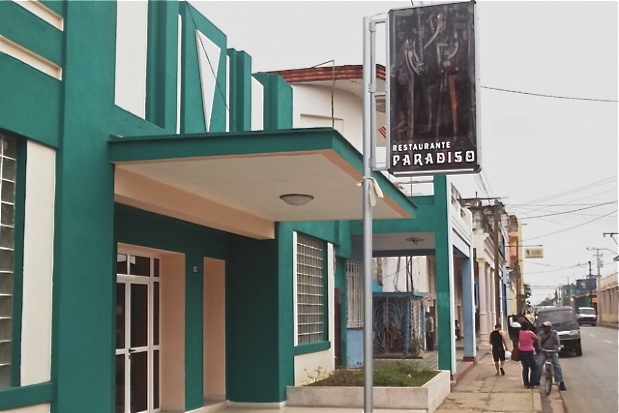 Almost thirty years after the fall of the communist bloc, the Cuban writer José Lezama Lima is still dealing with “Moscow” through the ongoing influence of the Soviet Union, to which he himself fell victim, dying after having been ostracized after the principles of dialectical materialism were brought to bear on him. Though long dead and gone, he still divides opinions in Ciego de Ávila, a town in the country’s interior whose residents never really knew of the obese author, sometimes referred to as “the immobile traveler.” A popular restaurant here, which until not long ago was known as Moscú (Moscow in English), has reopened its doors to the surprise and confusion of many. It is now known as Paradiso.*

The name change can only be attributed to an interest in reducing the complexities of a writer and his work into a tourist plaque. It is a longstanding practice that can be seen in Dublin with James Joyce, and in Cuba and elsewhere with Ernest Hemingway. Curiously, if in the end Lezama seemed more exotic, more odd than “normal” for a sophisticated poet in a Caribbean environment plagued by the cliches of political propoganda, it was because of the social isolation he suffered after the importation of a system marked by the socialist excesses of Soviet five-year plans, utopian visions and repressive methodologies.

We already know what “links” Lezama with the city of the Kremlin. We also know how that city’s infuence spread throughout Cuba, reaching into even the most remote corners and psyches of multiple generations. What is more difficult to understand is how the city of Ciego de Ávila chose to associate itself with the poet it chose to honor, considering he could not stand to spend so much as one provincial night in a room in Santa Clara. Yet at a point very near the Central Highway there is now a state-run restaurant — recently opened, spacious, elegant, full of mirrors — named for his novel, which censors prevented from being released in Cuba when it was first published.

Nothing in the building recalls its “Moscovite” past. Nor is there any evidence that the writer, who looked like a corpulent mollusk, ever lived at 162 Trocadero. It amounts to a simple name change and an announcement that invites any passersby to spend some time on the corner of Maceo Street. “Gallery-restaurant” appears to be the new term for this transformation, a metaphorical acronym for a food-service business, as though the association were not apparent.

Very quickly the debates started, and they were not about the menu possibilities but rather about the settling of scores, which in Cuba historically involves culture, daily life and even geological strata.

In Invasor, a provincial Communist Party newspaper, a reporter mentions the resurrection resulting Lezama’s current popularization, noting that “he was silenced in this country during the bleak period of the cultural five-year plan.” The writer adds enthusiastically, “A name of such reknown as Paradiso will undoubtedly serve as a moral challenge to Cuban culture through gastronomy.”

But in the same publication another columnist laments tossing the corpse of the beloved former superpower out with the trash. “I would not dream of trying to erase the name of the restaurant because… it is the iconic representation of what the Soviet Union was, a state… which held out its hand to feed us.” And though the writer acknowledges Lezama’s right to compensation now that the poet has once again been returned to the national pantheon after having lived like a lost soul for whom no one lit candles, he quietly adds, “it is good that we pay homage to Lezama and his legacy, which we did not always do, but there is no need to get carried away.”

A quarrel over the super-deceased. The sublime fat man and the Soviet superpower. It could be called “The Tragedy of the Century,” except now it is being replayed in a minor key as a municipal farce.

To know the final result means waiting to see how the people of Ciego de Ávila choose to call the establishment from now on, by the old name or the new one. There is nothing to guarantee that invoking the title of a novel destined for perpetuity will prevent a restaurant from succumbing to sudden collapse or gradual neglect, a common characteristic of Cuba’s state-run economy. There is also the challenge of maintaining a satisfactory relationship with the world of Paradiso. Running from the stove and refrigerator to the the tables and counters increases the risk of fatigue.

Some customers may recoil in terror if they are forced to swallow the size of this project along with a bowl of broth. It is enough to make one fear the suggestion by one of the aforementioned journalists: “It might be worthwhile for the restaurant’s workers to at least be familiar with the novel’s plot summary so that they might be able to share this information with those who dine there.”

*Translator’s note: The restaurant bears the same name as a 1966 novel by Lezama Lima. The novel figures prominently in the plot of the 1994 movie Strawberry and Chocolate.