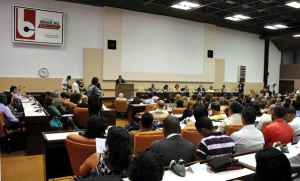 Havana, Cuba, November, www.cubanet.org — Last November 21 the “2013 International Advocacy Congress” concluded in Havana.  The event was sponsored by the National Organization of Collective Law Firms of Cuba (ONBC). At its opening, Homero Acosta, secretary of the State Counsel, was present, and doctors Joao Maria Moureira de Sousa and Hermenegildo Cachimbombo, Attorney General and president of the Order of Attorneys of the Republic of Angola.  According to the official press, the conclave included the participation of 400 Cuban delegates and 17 foreign countries.

In the event, the Attorney General of Angola, holder of a professor’s chair in Law, gave a keynote lecture about “The importance of ethics and professional conduct of lawyers,” noting that “The attorney is considered by some as a defender of the bad and by others as a professional essential to the full development of the State and society. . . He must comport himself ethically, cultivate moral values and principals.”  So it seems that this professional came with the purpose of teaching habits, skills of courage and ethical values that Cuban lawyers have lost in the exercise of trial defense or in the representation of their clients.

Obviously, the Angolan Prosecutor, coming from the emergent third power of the African continent, rich in petroleum, diamonds, gold and other natural resources, was not interested in the binding central theme of “the economic rights of those who lost a family member and the sick or mutilated veterans of the international war of Angola.”

The president of the ONBC, Ariel Mantecon, did likewise. True to the Castro pattern, he said that his organizations focuses “On the Cuban juridical context in considering access to defense as a constitutional right, making possible the immediate presence of this in the criminal process.”  Deceptive words when, precisely this year, and in the month of October, the opposition Cuban Commission on Human Rights and National Reconciliation (CCDHRN), reported about the 909 arbitrary detentions, the highest number in 18 months; and his organization does not make fair use of Habeas Corpus against the Detentions by the Castro Regime.

Even if Advocacy 2013 focused its topics on core aspects of modern societies, this group servile to the Castro regime has done little in the face of complaints that the Inter-American Commission of Human Rights makes which sent letters to the Cuban government in order to have an opinion on this part, in cases that take place constantly and are not responded to by the Cuban communist regime and sometimes even, the answers come in empty envelopes, according to the said Commission, or official answers arrive that far from answering the cases that are exposed to them, they oppose:  “You all do not have authority or any jurisdiction to inquire about the cases for which you solicit us.”

Likewise Rene Gonzales, ex-convict for the crime of espionage against the United States, who took part in the event in order to get to know the attendees as they are “his brothers” and to teach them ethical norms of loyalty to the regime, and not his confrontation over the factual limitation of individual liberties in Cuba.  He should have told them that Cuban ex-agents are treated respectfully and enjoy good health and feeding.  In contrast with those that are prisoners in Cuba for fighting for individual freedoms and respect for human rights. Maybe Rene is not familiar with Cuban fighters like the Ladies in White who are detained and left deprived of resources in areas and towns far from their homes as a new punishment practice of Castros?

In summary, the Congress served to raise funds on which the regime feeds: it strengthened the control structure between the executives and the member lawyers of the guild; just as it ratified the servile role of the ONBC supervised by the Ministry of Justice and watched by the Department of Organization of the Central Committee of the Communist Party, without really being an “autonomous national institution and of social interest.”