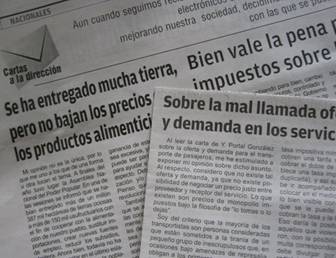 Years ago, when the Granma newspaper opened its Letters to the Editor Section, devoting two pages once a week (Friday), some people thought that, albeit rather belatedly, a small opportunity had been opened to state our views publicly on the various problems facing the nation.

The passage of time proved us wrong. I wrote two letters on economic aspects, which were never published, receiving an acknowledgement of receipt only for the first, where they informed me that it would be studied and, if approved, published. Everything indicates that it was not.

The keynote of the section seems to be, to constitute one more sounding board in support of government policies, far from the real or fictitious opinions of citizens, sprinkled with some trivial matters such as more or less shrill music, uncollected garbage, a broken street or sidewalk, abandoned park, etc., to divert attention to the shallow problems (more effect than cause), without touching on the truly important.

A responsible citizen, after praising the Party, government and its main leaders, assuming that there is nothing to fear, because of his proven good intentions, suggests that it is worth paying taxes on homes because the land on which they are built does not belong to anyone, but is national patrimony. Taxes exist in most countries, but this citizen forgets, that to propose one more way of fleecing the people, adds to the misery in which the majority of Cubans live, with very poor wages and pensions.

Another is worried because they do not lower the prices of food products, produced by the people leasing the land from the government, regularly proposing that the earnings in this sector not be excessive, since their work should not be to enrich themselves but to help the revolution, completely ignoring the taxes and high prices they must pay to the state for farm implements and inputs necessary to produce, and the difficulties to be overcome to achieve it.

Another one carries on against private carriers, demanding higher tax rates in line with the prices they charge for their services, and draconian penalties for violators, through a complicated system of control. Forget the high price of fuel, as well as spare parts, the maintenance, repairs, etc.

They have never posted a remark to the State about how at the top the bad officials do not correctly interpret the ideas of the leaders or fail to implement them, nor about the issue of high prices of the products the State sells in its commercial networks or the services it provides. Praise for the Cuban model is not lacking in any of the letters: it seems a prerequisite for publication.

These opinions published and, therefore, approved (I imagine there are many unapproved that are never published), are an indication of high citizen illiteracy, on issues of trade and the provision of services in a particular, with control, but without the failed paternalistic tutelage of the State, majorly responsible for our chaotic economic situation.

It is worrying that, while public officials at the podium call for changing the mindset and leaving behind the dogmatism, in their the Party organ’s Letters to the Editor Section, they prioritize these absurd and outdated views, deeply dogmatic, that respond to obsolete opinions, who have shown their failure over years of repeated application.