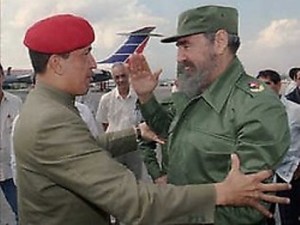 Some might think that luck came to the aid of a beleaguered Fidel Castro, when back in 1998, the island economy was going down with an industry crippled by lack of oil, exports were in the toilet, finances in the red, international debt swelling, and expenditures of billions of dollars to feed 11 million Cubans badly.

The only commander was crossing the desert. Four years earlier, in August 1994, a mob rioted on the Havana Malecon, demanding open borders and the ability to flee on rafts bound for Florida.

The continuous defections of professionals, athletes and intellectuals were no longer news. Education and Public Health, two of the vaunted achievements of the revolution, plummeted.

In Cuba in the late 20th century almost nothing worked. Except repression. Blackouts. People ate poorly. And their ramshackle houses clamored for urgent repairs. Between cyclones and low productivity, Cubans took refuge in sex and cheap rum. The future, when planned, was to flee. Wherever you could.

With empty bellies and penniless pockets, many people refuted the anti-Yankee discourse of Fidel Castro, who for hours and for any reason, planted his tent and mobilized the nation to go to war for his “battle of ideas” .

Just when they painted the worst predictions for the continuity of the Cuban Revolution Hugo Rafael Chavez Frias came to power in Venezuela.

A stroke of good luck. In his eventful life, Castro has had good fortune. From not being lynched by Batista’s soldiers after robbing a barracks in Santiago de Cuba, serving only 22 months of a sentence of 15 years in prison on the Isle of Pines, freed by a general amnesty, until, dying of thirst and hunger and with only three old rifles to hunt doves, he and his group of 7 men undertook their guerrilla struggle.

Perhaps the emergence of Chavez was not only the product of good luck. Someday, when the state archives and political police files are opened, it will be known in detail the role played by Cuban intelligence in the political formation of Hugo Chavez.

The former lieutenant of skydiving was followed very closely by the spies of the Communist Party Central Committee’s American Department, who promptly sent his dispatches to the bureau’s first secretary. It was no coincidence that after the misguided attempt at a coup d’etat, on February 4, 1992, Cuban special services gave a special following to the reckless soldier from Barinas.

Maybe the game started earlier. But nobody can deny that after nearly two years in prison (he was released on March 26, 1994, case dismissed), the only place Hugo Chavez was greeted with a red carpet was in Havana. With several moves in advance, Castro completed the profile of the Venezuelan and opened the doors of the Great Hall of the University of Havana to the unknown coup leader to give a lecture.

By stages, Castro and Chavez planned the future moves of their pieces. From the formation of his Bolivarian party, until his election victory in 1998, the hand of Fidel Castro was behind him.

Venezuela had all the conditions created for an exalted populist, charismatic and talkative, to come to power through the vote. Rampant corruption and misrule of the traditional parties, while poverty and crime grew steadily in dark lands.

This cultivated cauldron was conducive to Chavez’z entry by the back door. Then he formed a Latin American entente of the carnivorous left with Evo Morales, Rafael Correa and Daniel Ortega. But Castro had his eyes on his Venezuelan disciple.

He had petrodollars by the bushel. He could revive plans shelved by revolutionaries on the continent. But first he had rescue the first-born, the Cuban revolution, tired, ragged and out of steam. Thanks to Venezuelan oil the extensive blackouts in Cuba diminished. And with the dollars of the Cuban doctors, engineers and other professionals who work in Venezuela, Castro received fresh tickets.

Behind the alliances and polarized discourse and anti-gringo attitudes of Chavez is Fidel Castro. If ALBA or another economic association hasn’t worked, it is because it is cursed by the inability of these autocratic systems to generate wealth.

Either way, the generous South American Santa Claus opened the checkbook and Cuban ruling class underpinned the power while the military corporations had liquidity.

From 2005 to date, Cuba has received more than 28 billion dollars in aid from the government of Chávez. The money has not caused a dramatic rise in the quality of life of Cubans. Not at all.

That money has gone to secret investments in telecommunications, tourism and modernization of the repressive forces. Therefore, Hugo Chavez’s unexpected cancer had thrown the government of the island for a loop.

If Chavez dies before the election of October 7, or loses power, the Cuban mandarins will be sunk. Not to mention they will have no money to buy oil, as new marine surveys from Scarabeo 9 show it may take three years to locate commercial wells.

To this, we add the logical exhaustion after 53 years of uninterrupted power. A fourth world infrastructure and a meager agriculture has not been able to bring root vegetables, beans and vegetables to the table of the Cubans. The cattle have been disappearing by the clandestine sharp knives of the butchers and hardly produce milk.

The situation is aggravated by the dissent that has become more rebellious and moved into the street.

If we return to another ’special period’, we already know what it means, a war without the roar of mortars, the dead calm of an exhausted population. That’s why Hugo Chavez has a cardinal importance: with him, the Castros entrenched their revolutionary dynasty.

The brothers from Biran have made their bet. One well calculated over the long-term. You can’t say it was a bad move. Although according to the news these days, they may have backed a losing horse.

Photo: Fidel Castro received Hugo Chavez on the tarmac on Havana in his first visit to Cuba on December 13, 1994.

Margin notes. – I do not know how or when Fidel Castro knew that in Venezuela he had a mulatto soldier called Hugo Chavez, born in 1954. But what is clear is that theirs was a political crush. They have cultivated their relationship as a well run marriage, and they do not forget to remember the date they met.

To mark 10 years from their first meeting on December 14, 2004, Castro presented Chavez with the Carlos Manuel de Céspedes Order, in a ceremony at the Karl Marx Theater, where he delivered a fiery speech. In 2009, 15 years of faithful friendship were remembered with a card. The last celebration, of 17 years since the Castro-Chavez first meeting took place on December 14, 2011 at the Simon Bolivar House, Old Havana, and consisted of an exhibition of 41 photos donated by the State Council of Cuba.

One evening in December 1999 at the Havana movie theater, the Alameda, I saw the Venezuelan tape of the dawn of the coup, one of many Latin American films shown during the International Festival of New Latin American Cinema, held that year in Havana. Directed by Carlos Azpurua and Jose Ignacio Cabrujas script, the film interweaves stories, I do not know whether real or fictitious, which occurred the night of February 4, 1992, when Hugo Chavez led a coup to overthrow President Carlos Andres Perez.

In 1997 or 98, during his first presidential campaign, Chavez traveled to Europe and one night I heard the interview he gave to the BBC Latin American Service and I could understand what a populist that Venezuelan was. (Tania Quintero).