Laura leaves us. This time she has undertaken the longest of all walks: that of eternity. A lot of walking had to be done by this courageous Cuban woman who at the start, without political leaders in government to offer protection – just the contrary, without an army or firearms to defend her, with only courage as her armor, together with other women, faced the mobs sent by the powerful – as coercive cannons – with no other shield than the love for her husband, for freedom and for peace. The church of Santa Rita was witness for almost eight years to the steps and prayers of this heroic lady who, together with other political prisoners’ families, close relations or sympathizers, decided to dress their courage in white each Sunday as a symbol of protest and without permission from the Cuban government. The price they have paid for “such impudence” is great, but not as great as the strength of character of these women who have remained firm in their demands in spite of the official scorn to which they have been despicably subjected without any possibility of responding. They got the world to cry out with them to end the Cuban political prisoners’ unjust imprisonment. That is how our Ladies from Cuba became great, and Laura with them; that is how they showed themselves on the streets, with their gladioli as symbols and standards of peaceful struggle, resistance and love of justice.

This October 16th was the first Sunday without Laura’s physical presence at mass and in the traditional march along 5th Avenue of the Miramar neighborhood, and I went with my husband to pay homage in that House of God located on 5th and 26. The parish priest mentioned her in the religious service – in spite of its being an ordinary mass, not a mass for the dead – and made reference to the years that she had been attending that temple, and prayed for peace for her spirit and eternal rest. Once the rite ended, we joined more than one hundred compatriots on a poignant walk along the usual route with the attendance of many independent journalists and members of the press corps.

From wanting to do and live so much her health suffered, already affected by diabetes. She spent her last days away from her modest home, which she generously made the home of all who visited her. Various imprecise medical reports kept her away from her loved ones, keeping her in intensive care for 7 days. Laura was a simple woman who was not in favor of the regime, so she was not eligible to be treated in elite clinics or hospitals that offer comfortable facilities, more competent medical personnel and all the medical advances, where the local chosen few and unconditional supporters are taken, as well as international VIPs. In my country medical care is free and universal, but it is very deteriorated, and the most impoverished hospitals and polyclinics are the ones within reach of the average Cuban.

It has rained a lot in Havana. During the last few days it has almost never stopped raining in the capital. They are Cuba’s tears that are cleansing the sorrow off the streets for her eternal march through history. Rest in peace, indefatigable lady defender of the rights of Cubans.

More pictures of Sunday’s mournful event, also through Ana Torricella’s generous collaboration. Click on each miniature to enlarge it. 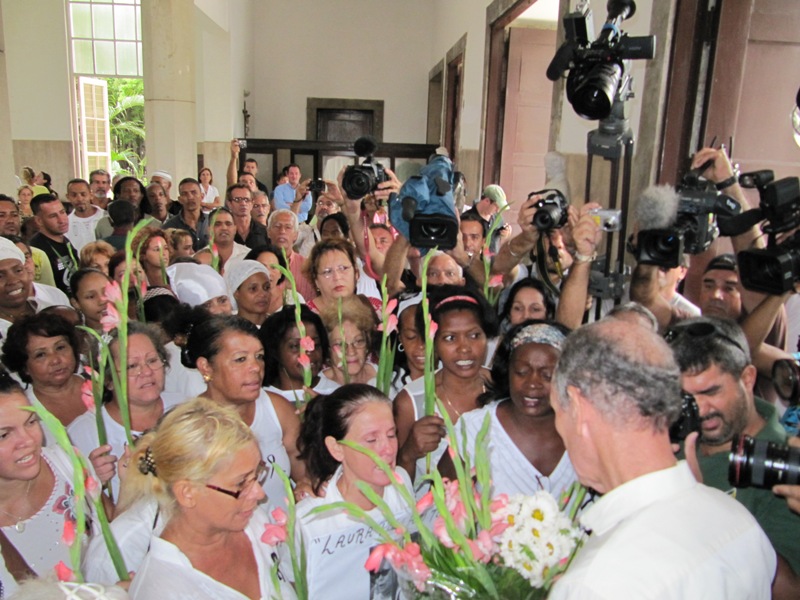 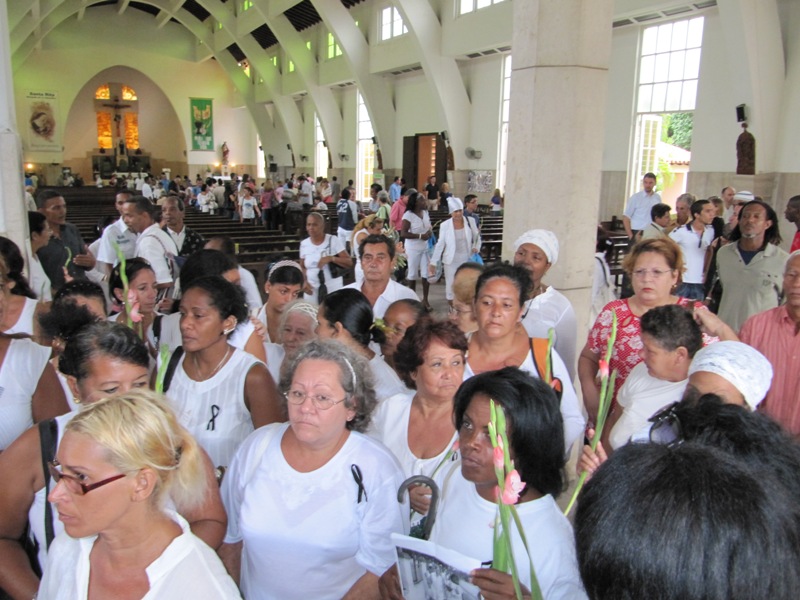 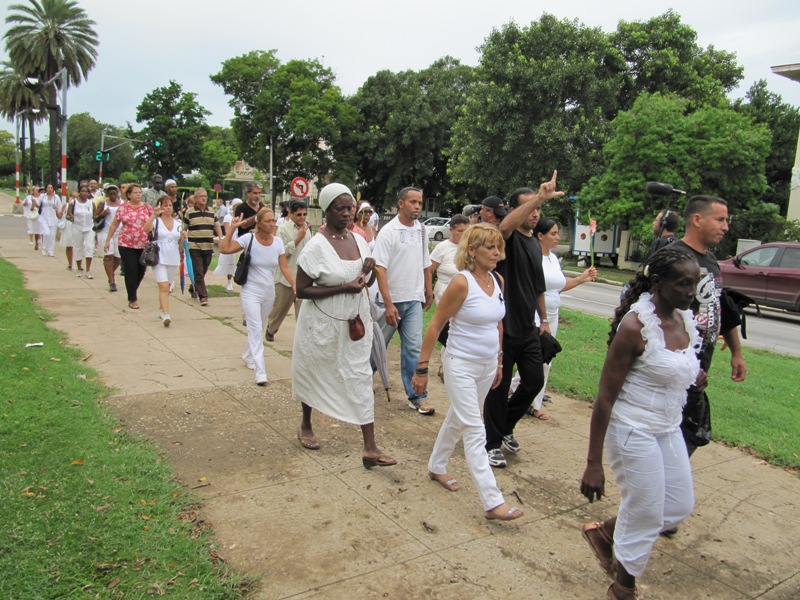 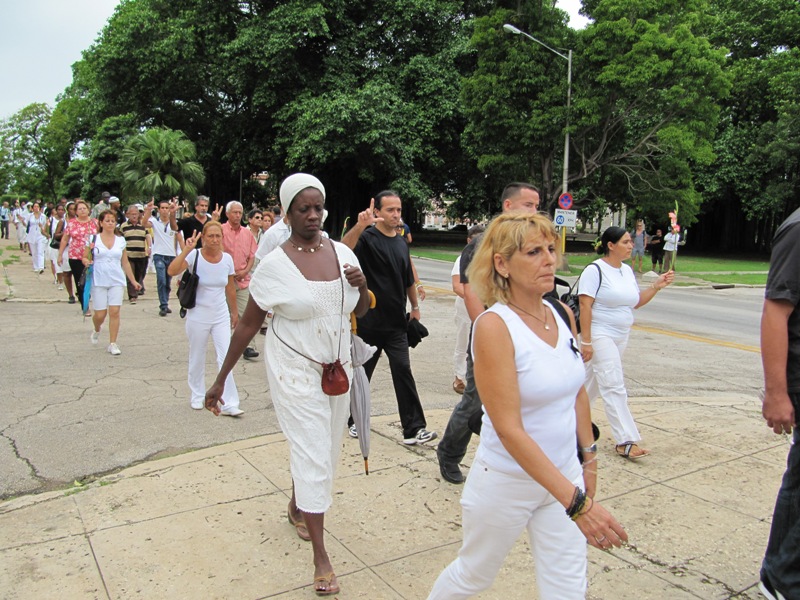 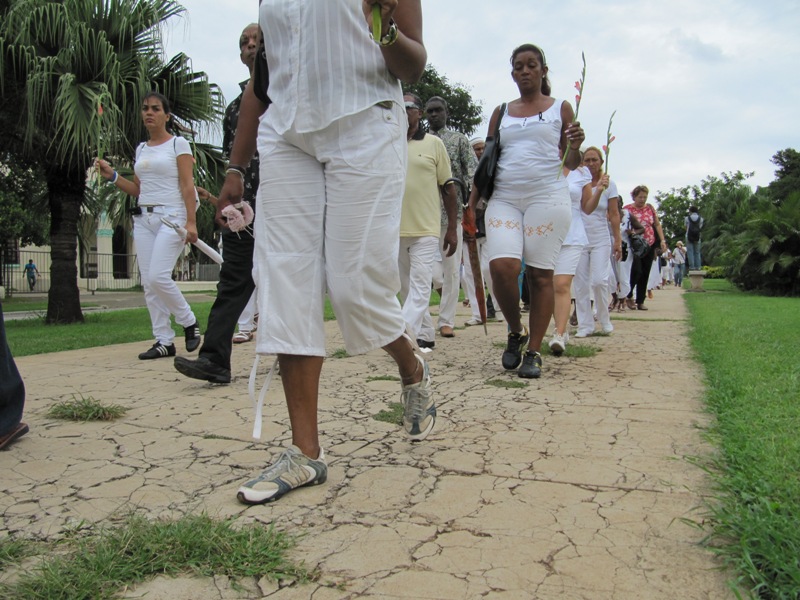 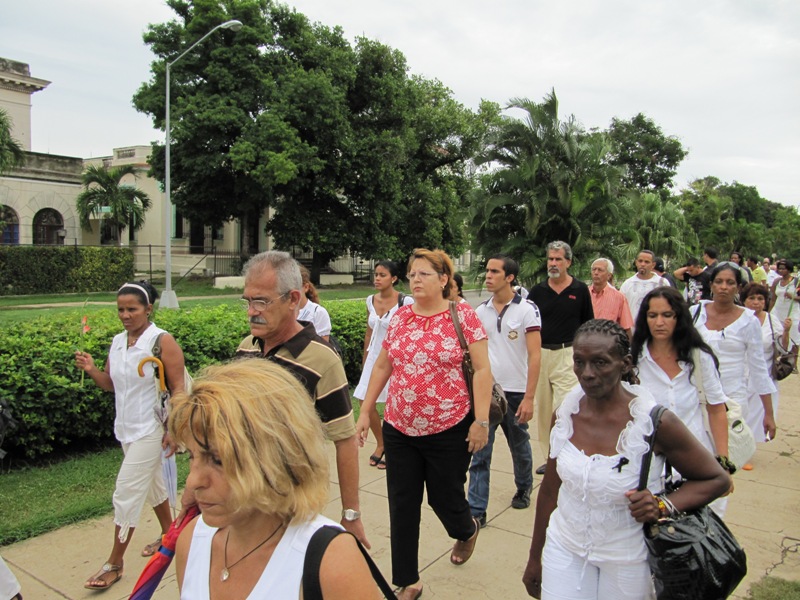 You can sign the book of condolences for Laura Pollán’s death that we will deliver to her widower and daughter. We have and will keep an image with a permanent link on the side of this page to facilitate access to those who wish to express their sorrow by signing. Thank you for your support.