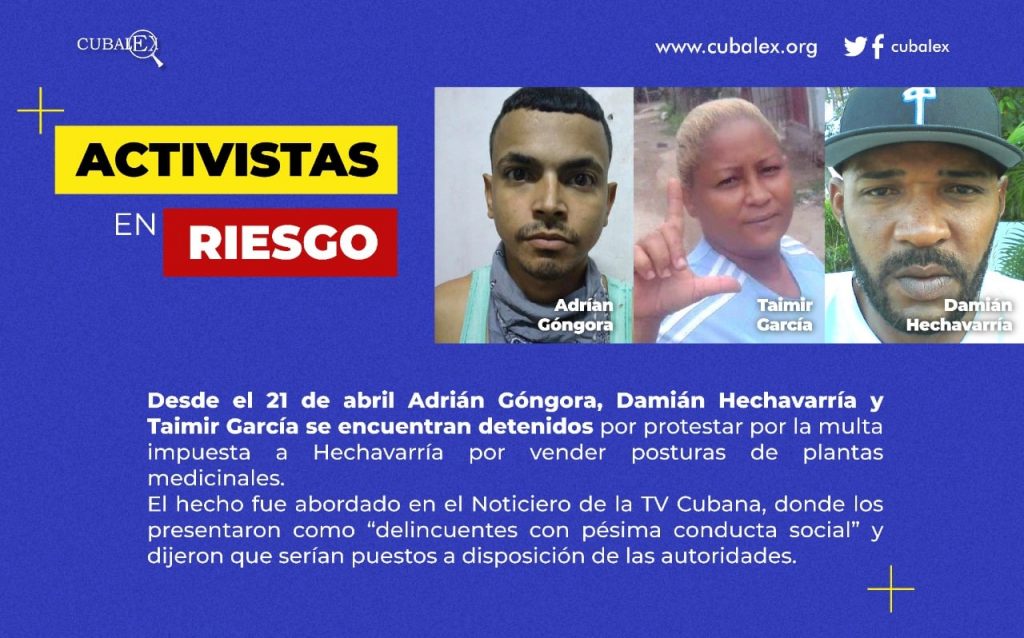 Cubalex, 29 April 2021 — The Provincial Court of Las Tunas has accepted the special Habeas Corpus petition, presented through legal assistance from Cubalex, in favor of the activists Taimir García, Adrián Góngora and Damián Hechavarría, detained on April 21 after peacefully demonstrating in that eastern city. The court required the police to present the detainees at a public hearing.

The public hearing, which seeks to clarify the facts, will take place on April 29, at 2:00 p.m., at the courthouse.

Cubalex applauds Jorge Luis García Fajardo, Annia Naomi Cortés, Jesús Canales Romero and Luis Fernández Reyna, judges of the judicial body, for working with the independence that their positions require, to comply with the provisions of the law and guarantee due process in this case.

Granting a petition for habeas corpus presented by citizen Holmis Rivas Carmenate in favor of the detainees Taimir García Meriño, Adrián Miguel Góngora Santiesteban and Damián Hechavarría Labrada against the detention carried out by officers of the National Revolutionary Police

As a result of the proceedings, the Court finds that a habeas corpus procedure has been filed on behalf of the detainees Taimir García Meriño, Adrián Miguel Góngora Santiesteban and Damián Hechavarría Labrada which requests that a hearing be held, seeking their immediate release on the grounds that their arrest and subsequent transfer to the Provincial Investigation Unit of Las Tunas is arbitrary.

Considering that the petition is exercised in the manner prescribed in article 467 et seq. of the Criminal Procedure Law, conforming as required, and according to what is pertinent.

To schedule the date, time and place to hold a hearing for a habeas corpus proceeding.

Requiring the Provincial Instructor who handles the process to present the detainees Taimir García Meriño, Adrián Góngora Santiesteban, and Damián Hechavarría Labrada, to hold the hearing that will be held on April 29, 2021 at 2:00 p.m. in the Provincial Court of Las Tunas, having to submit a written form stating when and the reason for the arrest of these people, the crime charged, the dictated resolutions in effect and the other arguments considered in respect to the denounced violations by the person who presents the process, who must be served with a copy

In the more than 10 years that our organization has been assisting its clients in filing this legal remedy, this is the first time that a court has complied with the country’s rules and respected international standards. We believe that this first step could create a precedent for justice and respect for human rights.

The habeas corpus petition was filed in Court the day after the activists were arrested, when they protested a fine imposed on Hechavarría for selling medicinal plants. The event was broadcast live on Góngora’s Facebook profile and disseminated on social media with expressions of support for the activists. Hours later the altercation was covered on the Cuban TV Newscast. Humberto López described them as “criminals with terrible social behavior” and said that they would be turned over to the authorities.

Cubalex denounces such behavior as violating the principle of presumption of innocence. “When they report it [like this], all the judicial officials begin to prejudge it,” explains lawyer Giselle Morfi.

“In addition, most of the time, due to the inefficiency of the Central Criminal Registry, they don’t prepare a timely update of the record of prior offenses and they also bring that up without it being correct.”

The specialist adds that it also lends itself to confusion and parallel trials regarding prior criminal records because they impose fines that do not leave a record and people assume it is true, and their criminal history expands many times, without having it. “This goes against another important principle, which is the social reintegration of the arrested person. How can someone, who has been portrayed under a high-magnification lens as a criminal, return to their pre-broadcast state, even if they are tried and acquitted? It is unethical for press professionals to participate in this,” concludes the lawyer.

With some 30 habeas corpus proceedings presented by Cubalex to the country’s courts from January through March 2021, this is not the first time that a Court has granted the petition, recognized in Article 96 of the Cuban Constitution and enacted in the Criminal Procedure Law. On February 3, activist Hanoi Morán Dime was released after the Provincial Court of Havana considered the habeas corpus petition drawn up by Cubalex. But on that occasion the judges did not clarify the circumstances of the request or hold a public hearing, as required.