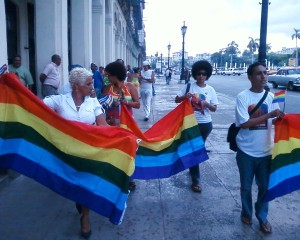 At this event, the protesters wore slogans supporting marriage between persons of the same sex.  Imbert Acosta had this to say:

“This year the march brings up the topic of marriage between persons of the same sex.  We are announcing the beginning of a campaign to collect at least ten thousand signatures, in order to later present a legal initiative before the National Assembly of Popular Power to grant the right to enter into matrimony to same-sex couples.”

The LGBT Observatory of Cuba since 2011 has called for the march around Gay Pride Day, not only for people in the LGBT community, but also for any citizen who identifies with the cause of ending discrimination on basis of sexual orientation.  Regarding this and other rights, Imbert Acosta stated:

“What we are asking for is not the right to be gays or lesbians… We demand that, being gays and lesbians, the State and society recognize the totality of our rights. One does not lose one’s religious dimension, nor political, nor legal personality by expressing a homosexual orientation. Sexuality is one human dimension, just as are all the others.  Historically we have been discriminated against for cultural, religious, and political reasons.  Nonetheless, a homosexual person must also have the right to share in culture, religion, and politics, as well as enter into matrimony, in the same way and for the same reasons as would a heterosexual couple.”

Asked about the role of the CENESEX official (National Center of Sexual Education) in this sense, Acosta comments:

“Mariela Castro, daughter of the Cuban president, serves more as a government spokesperson to the LGBT community than as a representative of the LGBT community to the government.  It is a means of maintaining control.  Hence many times the title of political group stigmatizes us because we are not in agreement with the Center that she directs.  Nevertheless, we have tried to build bridges for dialogue and they are the ones who have refused, alleging that we visit diplomatic offices, to which we respond that Mrs. Castro also does the same.  We have talked with transsexuals who are affiliated with the center and they tell us that they recognize that CENESEX does not authentically represent the interests of the LGBT community, but they allege that they need their operation (surgical sex change).

“On the other hand, Mrs. Castro does call on the march for World Day Against Homophobia to dance the conga with slogans in support of socialism, which as we all know is the political system which her family heads.  So, she is making a political campaign with the interests of the community.”

Mariela Castro is currently deputy of the National Assembly of Popular Power.  She has expressed on multiple occasions that CENESEX already put forth a draft bill before the National Assembly, “But,” comments Imbert Acosta, “in every case, it only contemplates civil recognition, not marriage as such.  And that is another of the matters that we wish to clarify today.  At the least, we, the non-officially allied LGBT activists of the island and many members of the community, want marriage, not just a civil union law which would leave us where we are situated, in a situation of disadvantage in matters of rights compared to heterosexuals.”

Although it is true that the authorities have not intervened directly against the protesters, it is known that they have made warnings to possible participants to keep them from marching.

A police warning can discourage many in a country with iron control by the State.