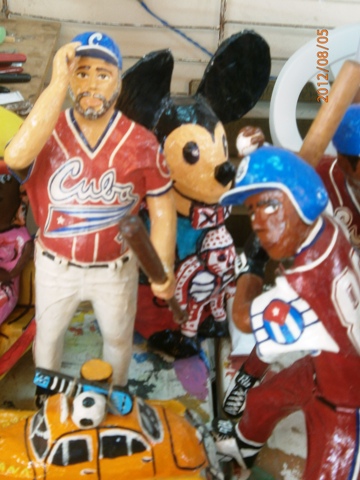 Yesterday, while enjoying my coffee in the morning, the children bustling outside reminded me that it was Three Kings’ Day.” It has been a while, for my husband and me, since the suffocation of making this day happen for our son came to an end. Memorable for me, because I believed in the Kings for a long time, but also felt for my husband who, from having been so poor, knew they did not exist. In Rafael’s case, his 2nd Grade teacher decided to cut off this illusion for the entire classroom.

Yesterday, the children got new toys, but without being thankful to Melchior, Caspar or Balthasar. Powerful daddies gave their children Xbox, battery-operated cars, bikes, and the list goes down to the common rubber balls and the pseudo-Barbies from the ’Everything for $1.00’ stores.

Except for street-vendors of plastic toys such as small cars or furniture for dolls and for the slow circulation of certain toys that eventually are sold in Cuban pesos instead of CUC, buying toys in CUC is a problem, especially since what were charmingly called “the basic,” “the non-basic,” and “the additional rationed toys,” disappeared, and even toys themselves for a time.Yet, in the past few days you could see children in toy stores choosing their presents and taking them home, especially on the eve of the 6th.

But, what about the ’Kings?’ Those were forced into exile along with Virgin Mary and Mickey Mouse when we began building Communism.

Mickey Mouse made a comeback in the cartoons pirated from Disney Channel. Virgin Mary came back, invoked by atheists in recent times. Even the birth of the son of the Virgin got his holiday, a concession by Pope John Paul II. However, the star of Bethlehem turned out to be a scientific supernova.

The Three Kings have become a sort of urban legend.There is talk about a cavalcade by the Kings a few years ago; you hear that this year they appeared in some parts of the city.I do not think this ban comes from Santa Claus, this chubby man omnipresent since Christmas has no longer been categorized as an ideological deviation.The Kings do their magic clandestinely, since the effort to dissipate them began with the invention of a Children’s Day, many months away from January 6th.

While disguised, the old traditions loom shyly, without the charm of the grass and water for the camels.