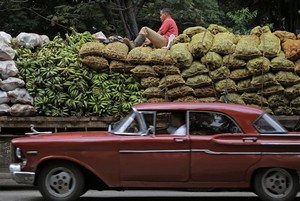 In life to be a truck driver, or to work at a dock or container facility has been a lucrative business in Cuba. Very lucrative, as Eulalio, a 24-year-old driver with experience hauling heavy cargo, knows well.

He comes from a lost village in La Serpa in Sancti Spíritus province, 400 kilometers from Havana. For fifteen years he has lived in a house, built from “things that fell off the truck,” on the outskirts of the capital. The stolen shipments that he carried in his truck have been the principal source of income used to furnish his house and even to buy a Dodge from the 1950s. None of this has come from his salary.

Since the last cyclone four years ago the transport of asbestos cement tiles has been handled by the military. The regime had one thought clearly in mind. If it wanted the tiles to go to those who needed them most, it could not leave the responsibility for their distribution to State agencies. The materials would not have gotten to those affected. In Havana’s poorer neighborhoods, where people build or repair their houses, it is common to see large quantities of cement, sand, gravel, cinder blocks, ceramic tile and other construction materials being calmly unloaded from trucks in the full light of day. All of it done “on the side.”

“What falls off the truck” is retail theft. Yes, it is true that cases of extra-dry rum, clear Cristal beer and jeans imported from China get swiped. But the biggest heists are carried out in container facilities, in the port itself or at subsequent points along the way. The issue was discussed at a meeting of ministers headed by Raúl Castro in September, 2010. According to the state press, statistics were presented that outlined the large-scale looting of containers and the resulting million dollar losses inflicted on the country. Something must be done, said the general, to stop the theft.

That will be difficult. Breaking open containers and robbing cargo from trucks traveling to other provinces is now part of the culture of those who work in this sector. It is the most important link in the black market’s chain. It is also the source of funds that line the pockets of those who hold important management positions. They do not need to break into containers. The wads of bills that fill their wallets are instead generated from illegal sales.

A truck driver like Eulalio can, and does, sell ten bags of powdered milk or steals some boots for sale on the black market. But the theft of hundreds of thousands of convertible pesos, of plasma screen TVs and other electronic devices are carried out by corrupt individuals heading criminal gangs or illicit State clans. They are protected by the immunity afforded them by the desirable positions they hold in the Cuban Nomenklatura.

A lot of stuff falls off trucks. However, a low-level driver or a dock worker at the port takes only what he needs to feed his family or to get a little hard currency. Not much more. The million-dollar losses result from something else. They occur under the umbrella of government ministries and their affiliated businesses. The authorities know this. It is simply easier to open a criminal file on a supermarket worker or the cashier at a hard currency store than on a high-ranking official.

These cases always raise a question for me. If the government says that everything is owned by the people, how is it possible that the people are stealing from themselves? Or is that citizens do not trust the system? Or are they genetically predisposed to be kleptomaniacs?