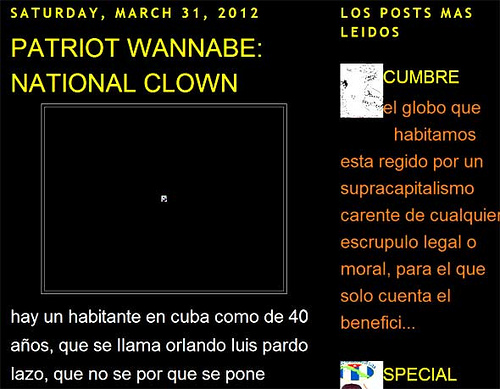 there is a resident in cuba of 40 years whose name is orlando luis pardo lazo, i don’t know why he puts so many names if a couple of them is enough to identify himself. who also self-titles himself a dissident and in passing photographer. and who above got naked and painted little things on his body and face, making idyllic buns and mops of hair resembling rolls in triangles, pissing on the flag, dragged through a patio, climbing in trees, wearing caps, getting naked, turning many more somersaults to call attention on the internet. come on, he is one of those aspiring patriots (who don’t remain clowns) who flood our blogosphere well, how goofy, now he writes a post where he says he was imprisoned because of the pope’s visit to cuba. it had to be. whatever. here the application of the baker act. it turns out to be that he is of this legion who follow the miami press, taken out of circulation while the country was at a national mass. and later when the pope clears off they were freed again. then the 4-named charlatan proceeds to narrate the multiple drama of his calvary. his whole farce — like his name — is always superlative. so that it seems taken from the pages of the bible during the golgotha of jesus and from alexander solzhenitsyn’s gulag archipelago (a real dissident, whose shorter name was enough to earn him a nobel). i should note that this figurine when i was in cuba came out in his blog with a gallery of photos of indigents on the streets under the title: the people that verela will not see on his visit to cuba’ but he lifted his ass (smooth-cheeked in his photos) with the door because the first thing i did was go see a friend who was sleeping in a park, give him money, enroll him in alcoholics anonymous, talk with friends and family and relieve his immediate misery when I returned 3 months later he had clean clothes, a haircut, accepted back into his house, sober, and as focused in his issues that we talked about the american nba because he was a star in provincial basketball. now the shithead orlando luis whatever could say to me that in cuba there are thousand of more beggars…but the case that i took care of, that one, i resolved. it is that a poor mental paraplegic like olpl (those are his initials, with which his followers identify him) cannot ask for more intellectual resource. let’s not forget who narrated in the famous univision soap opera style the kidnapping of yoani sanchez when they beat her only on her butt and she squeezed the balls of her attacker while they lifted her skirt, and said: the greatest woman in cuban was crying in my arms’ (the greatest woman in cuba). and so, he has always dedicated himself to little things of this style, besides supplying graphics to the blog of the greatest woman in cuba (he lives that). i wonder what such a good-for-nothing has really done to help a fellow in cuba well, who needs help is him, but i say within his dissidence I as not to pose as a rebel or dummy in photographs and give an aura of heroism from a few hours’ arrest (if they really did arrest him). one would have to see what his impact is in the environment where he lives, in the short and long term perhaps he creates a style although for me now he is that fauna of extraterrestrial cubans who live orbiting the limbo of his own fantasies; from which they are the only ones who believe and transfer them to the outside world through their blogs as if those who live outside believe them beginning because in the post that narrates his martyrdom he explains that he has internet, cell phone and twitter account and that all that was private. vacilador (vacillating) class. Thanks to us — because it cost the money of the u.s.i.s and u.s.a.i.d., that comes from the american taxpayer — he lives at a level above our own families there, and complains, paints himself as martyr. we have to see that self-employment is not enough, they need to make a living at the expense of the yuma, and sell him their farce. i know that now readers come and tell me how dare i criticize an opponent who suffers persecution in cuba, who is braver than me blah, blah, blah but these are the same types of little animals that until recently lived there like this; and now have come to live here, they have had to shorten their names, for example, of orlando luis pardo lazo they had to put on his social security orlando pardo, stop eating shit and start working. that’s why they are bastards they live in trauma in eternal identity crisis, irritated by their shattered protagonist urgencies they are people with a very big hole in the middle of them, who spend their lives trying to fill it… with shit. original (in spanish) (c) varela