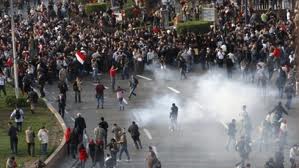 Cuba’s leaders and their acolytes have warned for years and without the least reserve, that the streets belong to the Revolutionaries. This amounts to the segregation that only government sympathizers can march and protest peacefully and publicly, but always in favor of the only party legally recognized which has been in power for 53 years. It is another example of intolerance and the violation of the rights of a society.

It’s true that all totalitarian regimes — of the right and left — like children of the same dictatorial sperm, converge in these aspects and maintain an iron control that enables their gigantic police apparatus.

The firing pins of the monitoring, information, immobility, lack of sociopolitical and economic freedoms, and the fakery have exploded, for decades, the cork of the exodus, which has driven citizens to multiple points around the globe; and our country, which was a receiver of immigrants, became a producer of them beginning in 1959. We how have a population living abroad of two million people.

Today it seems that there is no leadership crisis, but a relaxation of the same or the mythologized personification that imprints the figure of the Cuban maximum leader. The former president and his work and propaganda team — which took a break starting in 2006 — keeping society suffocated and repressed — in endless marches, events and political acts, and making people used to his persistent presence and keeping the first president in the Cuban media.

His successor and brother — I don’t know if voluntarily or conditions — doesn’t have the same importance, and this combined with the systemic crisis, the corruption, and the long stay in power of the primal guerrillas, the lack of perspectives and the accumulation of unresolved problems, makes people restless and it begins to show more and more in visible signs of being fed up.

The Ladies in White, humiliated, harassed, insulted and beaten by pro-government mobs for years, never ceased to demand freedom for political prisoners, and with constancy and courage demanded rights for everyone and exercised their peaceful protest in our streets. With perseverance, bravery and at a high price, they won, despite historical discrimination and intimidation, that not only the president’s daughter may demonstrate in our streets with people of similar interests. The street belongs to all Cubans who travel through them in search of sustenance, the food of the day, public transport that never comes or is over-crowded after so much waiting, or what they do every day in long lines of despair.

After decades of harassing peaceful citizens with the intent to terrorize them — as well as all of society — many Cubans, who know the occupiers who protest today in different countries, whom our media supports, and embedded in the example of the Ladies in White, they begin to shred, publicly and spontaneously, the rags of fear, and are beginning to show their disagreement in various ways. Society has begun to “scale the fence” of dissent and to demand their rights as an intrinsic part of the personal and community freedom of the Cuban nation.