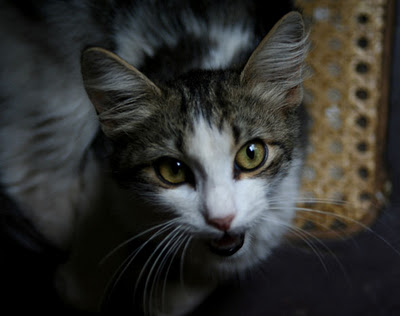 Gia, a blessing that we did not deserve. At least not in this country.

Gia came and went in 2011, more ephemeral than the angels who never dare to visit our island.

But Gia was generous. In her time she became a mom. And was my mom. And mine. Meow. That is why they killed her.

She waited nearly five hours. Dying. Among the land of the ants and blood from another planet. Under the autumn winter rain. Alone. With the memory of violence they performed on her without complaining. She never would have left without saying goodbye. Gia was not. My love is not. And never will be.

She had a gash on her lower abdomen. What was I thinking. The doctor was lax and unenthusiastic. No anesthesia. I’m going to resolve it, but without hope. He opened her up. “This is a disaster,” he said, “You do not know how many organs are pierced. I don’t even know how she’s alive. She is going to suffer.”

Once she made love. Almost physically love. Gia was upset and still a virgin. The Siamese and the ginger fought for her feline pheromones. I played to compete with males (my eyes are more catlike than those of either). And I hid Gia from them in a room, to make them a little crazy. To make them sing the song of desire. For Gia first surrendered to me. And I delivered.

I stopped chewing her armpits and stuffed tail and Gia took every invitation to be owned by Landy. And I hugged her hard, inside and pulled her mustache as feminine as her eyebrows and sniffed her saliva so neat and kissed her little moonstone nose and ate her goth emo lips (so black, so black) and I promised that one of her kittens would be mine, all mine and hers, a genetic alliance to save us from the treachery and oblivion. And only then did I free Gia for the Siamese and the ginger and the remaining eggs were shared.

Until the doctor put her to sleep. He had a syringe with potassium chloride. Actually, two. He swore they were just involuntary reflexes, unconscious, she did not suffer. All for fun. I know. She had even more life with me, just now she’d finished feeding her three kittens and it could again be just her and me. Silvia, her and me.

She was buried in Lawton, very deep, 24 hours later. It was hard, but also beautiful. She had not changed at all. Just the same, but rock. She was again waiting to not leave us with a final atrocious image. Silvia did not want to see her, I don’t know why. I knew Gia would still be Gia as long as we didn’t put her away to rot out of sight.

Gia’s eyes were Earths, planet Earths in miniature. What is Sylvia going to ask me now? If Gia’s eyes are inhabited underground?

You know they are.