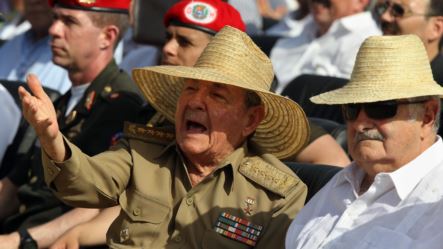 HAVANA, Cuba, August, www.cubanet.org- A few days ago, I decided to to explore around my neighborhood, Centro Habana, about people’s opinion on the evening of the general-president’s speech to mark the 60th anniversary of the assault on the Moncada Barracks.

Neighbors, parking attendants, taxi drivers, forklift drivers, self-employed jewelers, hallway drunks (their votes also count) and known neighborhood persons, individuals spanning several generations were the chosen sample to sound out opinions “from the bottom” They, the “beneficiaries” of the violence of the past six decades, which has become a source of legitimation of power, should have been the most interested in the official dictate.

In vain. Of those questioned, none had seen the act, heard the speech or witnessed the artistic gala. The wittier ones told me they had just turned on the TV without the sound, waiting for the entire ceremony to be over, so they said they had seen “Raul in uniform and a sunhat”. “Don’t ask me anything, just tell me what you thought of General Sunhat”, one of the surveyed countered. It’s marvelous what tact the man on the street has to always discover the most obvious of any event.

Many of the members of the opposition and of independent journalism, however, often listen to the official speeches. It is an exercise in discipline or self-flagellation, depending on your point of view, in which we train ourselves to read signs or to interpret the coded language of the Druids in olive-green. Given the secrecy and the erratic nature of official politics, there are few options left for us, so, at the very least, we speculate about the intentions of the [ivory] tower. However, this time we were left wanting: General Sunhat’s speech contributed nothing at all.

Obviously, only the attendees — guests or those obligated to attend — under the punishing hot Santiago sun, and dissidents, set up at home in front of our TVs, had the infinite patience to listen again to the boring fable of what was really a clumsy attack on an army headquarters of the Cuban Republic, once again glorified as an unparalleled act of heroism in the most lackluster and deficient ceremony yet organized for the occasion.

The speeches of the “friends” who attended the event, some presidents and other individuals representing countries in the region, were also at the height of the date: in the subsoil. Ignorance about the history of this country, about the reality we live today and of the most painful footprints on which Cubans walk today was obvious. It was no wonder, for example, that the President of St. Lucia had the unfortunate idea to remind us of the participation (interference) of the government of Cuba in Africa during the war in Angola, according to him “an example of solidarity and a feeling of racial equity” on the part of the Cuban people. Some political leaders in the region can’t understand that, sometimes, the more proper thing is to remain discreetly silent.

As for the closing speech, its flatness stood out. Without any achievement to celebrate, plans to announce, or ideas to propose on the part of the government, this was, without a doubt, the most nondescript of all speeches made in the history of the ritual embodied by the revolutionary liturgy, held, this time, in a Santiago wrecked after the passage of those other non-uniformed hurricanes, the natural ones that have devastated the city in the past four years, and in the midst of the embarrassing undeclared diplomatic crisis stemming from the detention in Panama of the North Korean ship

Perhaps it would have been more propitious to delegate again the uncomfortable task to the Dauphin Díaz-Canel, in his role as the emergent du jour, in order to disguise, with the “freshness” of the relay, the decadence that filtered through the commemoration, but maybe the pressure of a closed anniversary forced the mandatory presence of one of the protagonists of the epic. “There are still some of us left…” said the general president himself, with a certain justified melancholy. And those “some” have the difficult task, amid the national ever-darkness, to continue selling the Moncada as a luminous dawn.

Thus, in the twilight of the lack of political or economic projects, the chronic lack of productivity of the system, the failure of the reforms and the general apathy, perhaps Castro II wanted to divert the attention of public opinion by premiering his sunhat that contrasted sharply with the well-pressed epaulets of his general’s uniform. Something had to be done, a touch of nonchalance in the midst of so much barren memory, so those present would not fall asleep during the speech. Too bad that, judging from the comments out there on the street, the results fell short of the efforts.

But there is no need to be skeptical. Beyond the ridiculous, let’s be grateful: that unusual sunhat was the only novel touch throughout the ceremony of the consecration of the past in a nation increasingly strapped for the future.