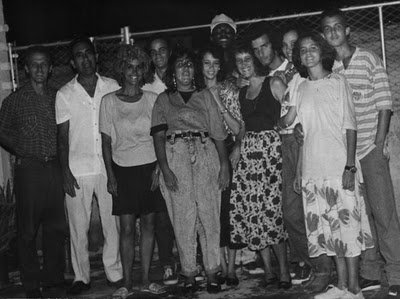 EDUARDO FONTES AND ME

Here we all are. So young, so innocent, so complicit. A picture can be worth more than a thousand Ministry of the Interior videos leaked by Cubaleaks.

The nineties. The Special Period. Zero Option. Then.

Death in black and white. Cadaverous laughter. Looking to the horizon beyond the camera lens. The sadness of being beautiful and hopeful in this country. The clothes.

On the far right, Eduardo Fontes, almost a baby. Two beautiful girls away from him, the hairless face of Orlando Luis, a ghost who at that time had never connected to the Internet.

We didn’t even know each other, Eduardo Fontes and me. Not that night of a Havana rooftop party, nor any other night in the world. Perhaps he reads this blog every day. Perhaps he is an apocryphal follower of Twitter @OLPL. We never exchanged a syllable, but a fleeting flash joined us for all eternity. And now his professional work as a political pixels expert in the Interior Ministry.

Human life never ceases to surprise me. As children we all play together. We are free in ignorant. We hold our bodies close. Touching. Without barriers, beyond the laughable surveillance of parents. Nonsense.

Then adolescence is pure attraction for another. As if everything is haunted. Breathing is so intense it hurts. We love each other. Fear each other. The world turns because we push it with every little gesture.

Then we specialize because we create a home and a wall and we need to show that we are useful and will succeed. And then the enchantment is made of stone and the reality is even more sparse, inexplicable, belligerent. Everything around us is bad. And we are left very alone imagining that we are doing good. And we no longer love if not by inertia. And our own colleagues who applaud today tomorrow will condemn us with the same indifference. It’s the end.

Death. The death of truth. That of Eduardo Fontes and me and those nine young people and three adults who take on the horror of a Cuban photo. I still remember their names. I’m tempted to name them now. I do, in the darkness of my room. Syllables that for centuries have not left my throat. Words that I thought forgotten and that quickly hurt again. Hurt forever. Like the mediocre life into which we were falling by the weightless force of gravity. I say them, but don’t type them. They know. They were in my soul and I didn’t remember. And, as usual, the screen of my mercenary laptop is blurred by the tears that accompany me post after post.

I have seen similar photos of Yoani Sánchez disguised as a Moncadista Pioneer, with her shabby slum girl laughter wiser than her parents to be able to survive. We were the same. The debacle. The report. An impossibility. And the ideological adult life turned us upside down, sick with despair in exchange for a monthly salary. Wanting to go out into the street naked. Vomiting and digging through the gastric juices to see if something pure still shines in the middle of the indigestible fib of being Cubans.

It’s horrible we didn’t understand each other. Not having tried.As free inhabitants of a cosmopolitan city, we Habaneros, bastard children of that great whore unconquerable by the populist prudery of a Revolution, we should have the civic balls to not let the bearded peasants eat up all of Cuba. Havana means resistance in an imaginary language.

The young in black and white of the earliest years of the nineties, we were called to consummate the collage of a future less futile for the rest of the Island, but we didn’t even try. Fuck it. Exile is a thousand times better (this photo is statistical evidence of that flight). Better despicable times to make war instead of dialogue.

I feel sorry for me. For my memory of all of you. Eduardo Fontes: Does this post deserve an official report or continuing the blind advance my operative case?