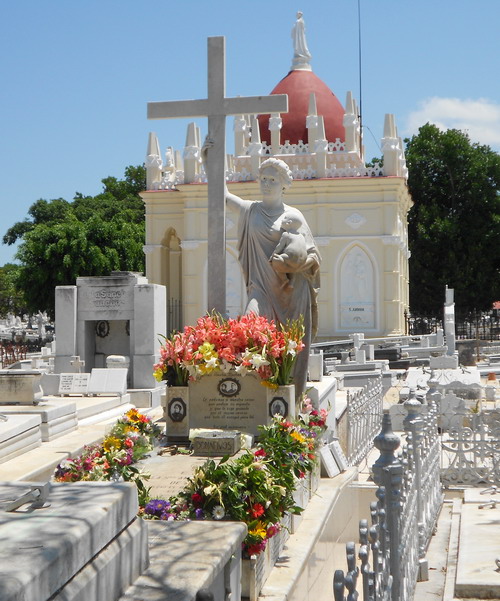 The touching love story turned into a popular cult of the Cuban nation, is followed by thousands of devotees from different latitudes. The story tells of the love of a young couple composed of Senorita Amelia Goyri and Jose Vicente Adot, whose courtship became a marriage censored by the groom’s family because of social differences.

After the marriage Senora Amelia became pregnant and eight months into her pregnancy she died. The story does not end there; some say she died in childbirth, others that after giving birth to a premature infant it was placed in her coffin after the death of both of them.

What is certain is that the Don Jose Vicente, the faithful husband, visited the grave of his beloved wife daily, people who saw him tell of the devotion with which, even after death, he spoke of his beloved Amelia, on whom he never turned his back even after her death.

Every time José Vicente came to visit his wife he touched the ring on the tomb hoping to wake his wife from her eternal slumber, talking to her and always bringing with him the most beautiful flowers. He repeated the same ritual on each one of his visit such that today her devotees show their reverence for the one who has one the title: La Milagrosa (The Miraculous).

The monument to Amelia was placed in 1909 on behalf of Don Jose Vicente, a monument that was placed at one end of the vault. The white marble sculpture shows a woman dressed in a tunic holding in her left arm a baby that rests its head on the maternal breast, while in her right hand she holds the cross that signifies her Christian faith.

Amelia Goyri is today an inseparable part of the Cuban faith, I don’t know if some day we will be able to be venerated at the altars of the Catholic faith, but what if I am convinced of is, the faith that this people have placed in this woman to which they attribute miraculous powers, which I would not dare to refute, out of respect for my ancestors who taught me to venerate her.

Those who visit the adored Amelia find a woman full of flowers and always accompanied by her followers and faithful devotees who take turns at different hours to guard the tomb and continue Don Vicente’s professions of love for his beloved.