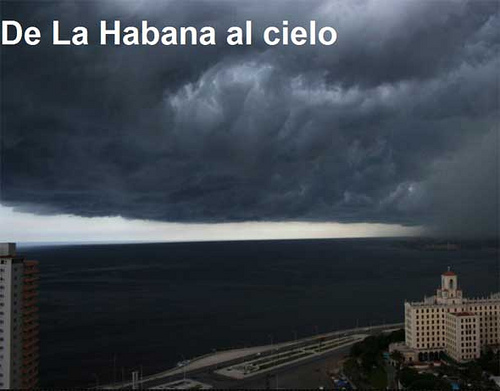 I bare myself in discourses in the blog delahabanalcielo.blogspot.com/2012/05/en-esenciaorlando-l…

From my childhood I remember…

Red. It was my favorite color. Now I don’t prefer any. Now nothing is as intense as it was at the beginning of the world. The red fabric in a handmade sweatshirt, worn over Mayte’s Pioneer uniform, in the winter of the seventies in the Nguyen Van Troi primary school that still exists today (how could we kids pronounce such a name?). A red beacon, like her fourth grade smile. A meek and merciful red amid the national violence of children, with its disputes and denunciations and Marxist slogans and the threats of “a note on your record” if you misbehaved. A red savior in the classrooms-turned-cages, at least for my introspective character. A red that I never forgot and that may be my only possession when I die. The eternal and ephemeral red fire of my first love.

Fear. Each change of class, each change of schools, each change of friends (and in Cuba friends all leave), each change in the body (and in adolescence the body is always mystery and miracle): the fear undermined everything. An exciting fear, that made you want to live. A feline fear that observes, ready to pounce, sometimes cunning, at the same time afraid of being observed. A fear that was pure present tense crystallized, maximum tension and attention. A fear of light, of atrocious lucidity. A fear that when it is lost later leaves a hollow echo in your life. And then you understand that little by little the incubation of your cadaver has begun.

Never. The island is a prison where freedom does have a place. To be happy in the midst of a crude war. To ignore the illusory line of the bars, to cross them at the first intention. The bullet in the back will be our last and final liberation.

I dream that I am immortal, like William Saroyan, still incredulous on his deathbed. I dream that my dead friends are about to be reborn. I dream I laugh and laugh and can’t stop laughing, with a joy so overwhelming I wake up choking. Sometimes I dream I make love, and it’s very physical, and even more foreboding. I dream they cut me or shoot me, but this is a tolerable dream, and I don’t associate it with a persecution complex or anything like that. I dream of the devil, though I don’t believe in the devil, but I always know from the start in dreams where I appear, transmuted into loved ones, and there are scenes in very dim lights, but beautiful. I dream of Fidel, though I don’t believe in Fidel, like William Figueras* (that other possessor of words), and in the dream I want to please him in everything to show him that he can trust me. And there is no association between those last two dreams: please, they are not malicious.

Of life I ask…

I consider myself a writer. That is, a reader. Someone who practices the capacity of association as self-preservation against forgetting. Each photo is mute attempt at narrative, a sketch. Each performance or video, also. Art is a ruse.

Absence of hatred and resentment…

It has no place. I can’t nor do I want to accommodate it. When it has broken, it has been terrible: a suicidal and almost criminal fog. I don’t know how to hate without dying and being dead to the world. And then the soul is never healthy. There is always a scar. It takes a real hero (and not just a patriot, but the exact opposite) to emerge from these bursts of patriotic memories that dehumanize a man. I’ve been there.

I am inspired by…

Everything. The air I inhale and exhale. Nothing. The air I breathe in and out. My writing has something of displeasure, a countercurrent, an un-inspiration. It is a forced gesture. I look around me and realize that what is natural would be silence. In that sense, I’m an anomaly. The family idiot, who ignores the fidelity nonsense. The one who will betray his people, being the only one who truly believed in them and loved them.

If I were a song…

Surely one without lyrics. Or whose lyrics no one understands or knows how to pronounce. Who knows the Beatles’ Because, discovered one morning in 1989 on Radio Progresso, while studying like a Dostoyevskian madman to get into the Biochemistry program at the University of Havana (and succeeding, despite there being only 21 places for the whole country: State Security can’t do anything about it now, they’re no longer gods like in the times of the Revolution). Who knows Dreamer, by Europa, which not even the group Europa remembers. Who knows our National Anthem, by itself, without the military fanfare that in Cuba is synonymous with society, left to listen to as a languid melody of defeat and love (called residual liberty of reading), like a chord that accompanies us while life gently changes color.

If I had to pick a serious poet…

A bad one. One who no longer uses worse, but rather stones in prose. One whom no one in the free world could Google. A Cuban. Luis Marimón for example, rolling cigarettes with his manuscripts in their thousands and unpublished books (before he exiled himself and soaked his organs in alcohol until he died). Juan Carlos Flores, for example, resisting the insanity in his tiny apartment disguised by a worker’s cenotaph called Alamar. Or better, a worse one: Jorge Alberto Aguiar Diaz (JAAD), for example, master lama whose apocryphal poetry I must completely re-write some day.

Gia. Gia, my love. Gia, the kitten who was our daughter and our mom. Gia, who knew everything and was better than everyone. Gia, brought in on a gust of wind in the decrepit neighborhood of Buenavista and who, from a mediocre death blow left us in less than a year, when I wanted her to live with us forever, even longer than us. Gia, who I talked about all the time, in a language that needed no translation because she was the absolute beauty. Gia, who is buried in the yard of another decrepit anemic Havana neighborhood called Lawton. Gia, whose eyes were fully inhabited planets. Gia, with her gothic lips and fox’s tail. Gia, who inevitably made it a love triangle (Silvia and I were the mom and dad of her three kittens). Gia, my love. Gia.

That of your blog. That of never. Imagine a sky with diamonds but with no heaven. Certain rabidly electrified skies of Matanzas, city of bridges that no longer turns nor lets pass boats (nor trains, nor the rivers of moribund springs, nor the tedium of post-revolution time). The sky capped with the stars of a December in Guadalajara, Jalisco, Mexico, North America (the closest was that national obsession called the United States, where everyone talked badly to me of the gringos and forced me, with free tequila, to speak well of Fidel: no matter how many despotisms I told them of, I only managed to increase their admiration). The sky I will not see, of a dream where the stars turn to flee through the zenith to fall upon the earth (many years before Lars von Trier’s film Melancholy). A sky like that, but with the hollow moon of an Elizabeth Bishop verse. The phrase “my sky,” that so many Cubans have learned to forget to say, but that survives for the future will never be in the character of Francis, of The Halfway House where Guillermo Rosales killed him. These skies, my sky.

“Island,” by Virgilio Piñera, written in the peeling Cuba of 1979, at the time of his own death after a decaying decade of ostracism and sad totalitarianism:

Although I am about to be reborn,
I will not proclaim it to the four winds
nor feel myself a chosen one:
it was just my luck,
and I accept if because it is not in my hands
to refuse, and it would, moreover, be a discourtesy
which a distinguished man should never commit.
It’s been announced to me that tomorrow,
at six past seven in the evening,
I will become an island,
an island as islands usually are.
My legs will make land and sea,
and slowly, like a Chopin andante,
trees will begin to come from my arms,
roses from my eyes and sand from my chest.
In my mouth the words will die
so that the wind can howl at its pleasure.
After, lying as islands usually do,
I will look fixedly at the horizon,
I will see the sun rise, the moon,
and far now from any anxiety,
I will say very softly:
so it was true?

From this humble blog I want to thank your for the kindness, generosity and fondness, for your essence that you have put in my hands. Here you have it so that from this moment you can fly.