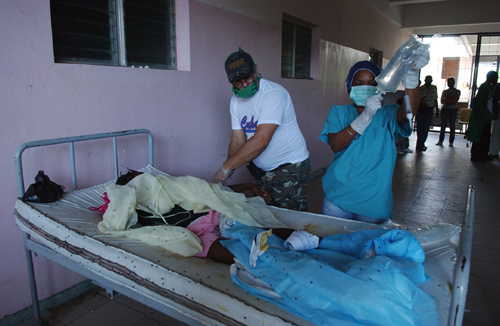 The picture illustrating this post, which I downloaded from an official site, relates to one of many that exist on the intervention of Cuban doctors in Haiti after the earthquake that struck that country in 2010, and also about the cholera epidemic. Interestingly, on this December 3rd, Latin American Medicine Day, I failed to find any photograph of our doctors caring for victims of cholera in Cuba.

Of course, some might say that you cannot photograph what does not exist. Judging by the official press, and in the absence of convincing medical reports, it appears that what is circulating in Cuba -especially in the eastern region of the Island- is not cholera, but an outbreak of acute diarrhea. Another euphemistic phrase that a few months ago defined cholera in the official media was intestinal infection from water contamination, which in turn was also reported as being under control and eliminated.

Today we woke up with a phony media celebration. The TV morning news was pleased with the doctors’ day, and once again listed the countless achievements and sacrifices of health professionals, while Cubans on the Island continue to be exposed to the dangers of cholera and dengue fever, two epidemics that have already claimed many lives and remain hidden, concealed under the government triumphalist speeches and the accomplice silence of health authorities.

What good is so much professional talent, so many hours sacrificed, working in appalling conditions, or the internationalists’ absence from country and family, if our doctors are unable to comply with the ethical obligation to disclose the risk faced by the population? When did the sacred duty of those who once swore to protect us become subordinate to the commitment of political ideology?

At present, only a few doctors dare to overcome their fear and compromise their personal and professional interests to alert patients about epidemics silenced by government policies. Most remain silent.

This December 3rd reminds us that there are very few doctors with dignity in this country, once such an example of medical care, that for so long had such a great primary care health system. So far, the silent docility of those who one day took the Hippocratic Oath constitutes a desecration to the memory of the illustrious Cuban doctor, Carlos Juan Finlay, born on this day in long ago 1833.