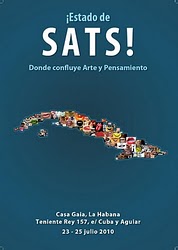 On Saturday March 3 we had a meeting at Estado de SATS regarding cultural and academic exchanges between Cuba and the United States. The panel consisted of the philosopher Alexis Jardines who participated by video-recording, political analysts Julio Aleaga Pesant and Miriam Celaya, and Charles Barclay deputy head of the United States Interests Section in Havana. Over the two hours that we debated this issue, fraught with multiple twists and turns, we generated an intense and respectful dialogue that we hope will soon proliferate in our country.

The reaction of State Security was swift: an organized police operation in the surrounding streets to intimidate the participants as they departed once the meeting ended, and the almost simultaneous publication of several comments on the internet full of lies and false conclusions.

Why the rejection and fear around Cubans discussing our reality, and particularly on such an important topic?

The answer is undoubtedly in the nature of the system itself, in the difficult context is it facing, and in the absence of resources to maneuver given that the country is totally ruined. Every day it becomes clearer that the cosmetic changes initiated by Raul Castro can do little to revive an economy that needs an injection of billions of dollars, or to revitalize a governing party that has no roots or legitimacy among the population. The fatal illness of Hugo Chavez, his principal ally, becomes an extremely inopportune element faced with an unpredictable electoral process, which puts in danger the more than 100,000 barrels of oil Cuba receives daily, without no sign of a possible replacement. With values exceeding $100 per barrel, the Cuban government once again finds itself on the edge of the abyss.

On the other hand, the investments from other countries, such as Brazil and China, are clearly directed at bettering future relations between the island and the United States, which remain at a complete standstill due to, among other things, the refusal to release the contractor Alan Gross and the inability to take concrete steps in the direction of political reform.

This difficult scenario forces the Cuban government to restart an offensive to convince that neighboring country to ease its trade sanctions, or at least to ease restrictions on travel by American tourists. To accomplish this will require persuading the many who distrust the ability of the current government to carry out major economic and political changes. Within this strategy of “soft power,” academic and cultural diplomacy play a major role. By the same logic, the radius of influence for political actors who support the transition to a democratic system, both within and outside the island, must be reduced to a minimum. Time is running out and the elite needs to consolidate its corroded power as quickly at possible, in order to reshape itself to maintain its position, regardless of future changes.

Academic and cultural exchanges are extremely important to call on all the human capital that has escaped our country in a stampede, and to permit the free flow of information and knowledge that characterizes today’s world. But they cannot become a tool to legitimize a government that has destroyed our nation. These cultural exchanges could be called upon to become an indispensable ingredient in the transition to democracy, but this will only happen if Cuban civil society and the diaspora intersect, this must be the fundamental challenge.

Cuban civil society is in a period of resurgence that obliges us not only to exercise our rights, but also to do so with the greatest possible rigor.

Civil society’s demand to play the role genuinely belonging to it, greatly irritates the powers-that-be, especially considering that for 53 years the same group of individuals has assumed absolute monopoly over words, faces, and logic and, above all, counts on the power of force to prevent, at any price, Cubans from demanding another choice of government. The absurd accusations that seek to personally discredit everyone who dissents, the use of cynicism and deceit as irreplaceable tools, are demonstrations of the primitive and senile vision of this group clinging to the past, clinging to totalitarianism, refusing to accept that time is relentless.

The highest representative of this policy has been and is Fidel Castro, an individual whose hand has never trembled when he has imposed it, be it even to crush the life out of a human being (examples abound). I do not know the individuals employed in these media campaigns of rage and hysteria, but what is left is to invite them to understand that Cuba will inevitably change; it is just a question of time and circumstances until this so long-awaited rearrangement occurs, and I remind them that each human being is responsible for his own actions, a reality that should not be forgotten.

From our activism, we have no option other than to continue working on the transition to a democratic society, where the power of a few is never again imposed by force on the rights of an entire nation.

Note: I just read about Abel Prieto’s new assignment as an adviser to Raul Castro. Events will tell whether this move is consistent with the strategy set out above.