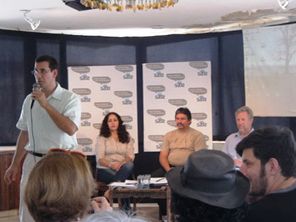 Last Saturday* in Estado de Sats the theme was cultural interchange between the island and the rest of the world, and specifically with the United States.

The panel was composed of: Miriam Celaya, Julio Ariaga, Charles Barclay, assistant chief of the United States Interest Section, and as moderator, Antonio Rodiles. Alexis Jardines was unable to attend but sent a video from abroad, that was screened before starting the debate.

As is usual in these convocations, the house had a good audience.

The most contentious issue was precisely why the cultural exchange produces so much more from our side over there, then from them to us. Especially if you consider that those who come through these exchanges are, in the vast majority, American intellectuals or artists, not Cuban-Americans as we would hope, because those are the ones who can tell us first hand about their experiences in exile.

Why can Silvio go to sing in the U.S. and Willy Chirino can’t come here and do it in the land of his birth. This topic was discussed very well by Alexis Jardines, who also expressed very sharply, “Without money you can’t be an (official) revolutionary or an opponent. 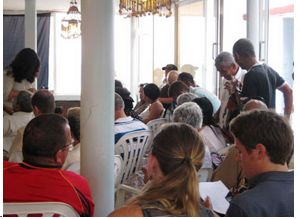 Notable among the comments from the public present was that of Dr. Jeovany Jimenez, a doctor from Artemisa and author of the blog Citizen Zero, whom the government barred from the practice of medicine, for being an opponent. Right now he is on a hunger strike in Guanajay Park, demanding they return to him the right to practice medicine. Also notable was the absence of “official people”– who were invited.

The cool morning passed peacefully, despite the refreshment that the host would have liked to give the people present was apparently “sabotaged” because the empanadas that he sent for to be enjoyed with the now classic tea, were acquired by “someone” who arrived to pick them up ahead of time [supposedly on behalf of Estado de Sats], and who even paid $100 more than their total cost to the lady that makes them.

At the end of the event, on leaving the residence, some of those attending were intercepted by security agents, who were prowling around the place, right there in the street, but there were no arrests.

*Translator’s note: Rebeca’s text says Friday, but in fact the event was on Saturday.